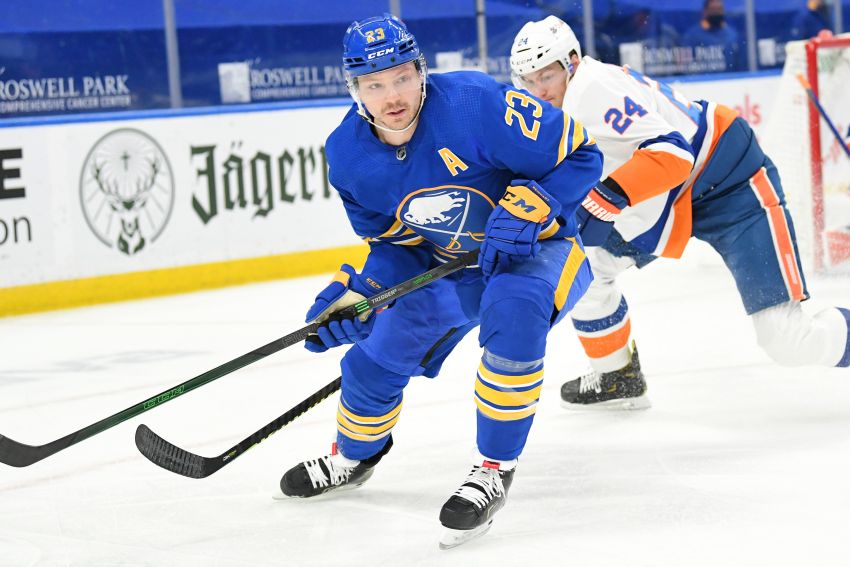 BUFFALO – For years, center Sam Reinhart wanted to sign a long-term contract with the Sabres, the team that drafted him second overall in 2014.

But when Reinhart’s entry-level contract expired in 2018, he only received a two-year deal. Last year, he settled for a one-year contract from the Sabres’ new regime.

Then the Sabres endured a miserable 2020-21 season, finishing dead last. Reinhart, one of their only bright spots, grew more frustrated as the year dragged on.

Following the trying season, Reinhart, 25, said he wasn’t interested in going through a rebuild.

On Saturday, general manager Kevyn Adams continued the Sabres’ overhaul, trading Reinhart to the Florida Panthers in exchange for a first-round pick in 2022 and goalie prospect Devon Levi.

Reinhart and Adams refused to say if a trade was requested.

“I’ve truly given it everything I could have,” Reinhart said on a Zoom call. “For whatever reason, my contract situation has led to this point. I had always been prepared to sign long-term. But the reality of the situation was it was kind of led to this, where there was some decisions that had to be made. It was a tough spot to be in for a city that has given you so much over (seven years).”

Reinhart, a restricted free agent, can hit the open market next year. He scored a team-high 25 goals last season and thrived after he shifted to center, his natural position.

In the near future, Reinhart, who proved he can score without center Jack Eichel, will likely earn a huge payday.

“I’m a big believer in Sam Reinhart as a player, as a person,” Adams said Saturday inside KeyBank Center after the NHL Draft ended. “He’s an excellent hockey player. But the fact of the matter is he wasn’t going to be here past this year. He was entering into a UFA situation so, as we’re building this out, you look at these things and you’re projecting where are we gonna be in a year, two or three years, and you have to make hard decisions.”

Late Friday, hours after the Sabres dealt defenseman Rasmus Ristolainen to the Philadelphia Flyers, reports surfaced Reinhart was close to be traded to the Panthers.

“Pretty stressful,” Reinhart said of the wait, “but (I’m) obviously thrilled with how everything went down.”

What held it up?

“It was a little bit of the nuance of the CBA, terms of the language,” Adams said. “It just had to be worked out. So the framework of the deal was in place. Sometimes it’s things going through the league office and that’s just kind of what happened.”

Adams said if the pick the Sabres received ends up in the top 10, it will slide unprotected into 2023.

Of course, the upstart Panthers just enjoyed a 37-15-5 regular season, so the pick could end up being in the 20s.

Reinhart, who has never played an NHL playoff game, knows he has a special opportunity in Florida.

“It’s very exciting, to say the least,” Reinhart said. “I’ve actually been fortunate enough to play with a lot of guys on the roster, been in contact with a bunch of guys already, coaches. I’m absolutely thrilled and motivated to come to a group that is hungry, try to make it to the next step.”

Reinhart sounds open to signing a contract extension with the Panthers.

“I just feel comfortable,” he said. “We’re both excited about the future.”

The Sabres dealt Reinhart for futures, which raised some eyebrows. For a five-time 20-goal scorer, they did not receive a roster player.

Still, the Sabres like their return. The Panthers drafted the 6-foot, 185-pound Levi, in the seventh round in 2020, 212th overall.

Levi, 19, dazzled for Team Canada at the 2021 World Junior Championship, compiling a 6-0-1 record with a 0.75 goals-against average and a .964 save percentage in seven games.

But Levi broke his rib in the tournament and did not play as a freshman at Northeastern.

“A really important part in the Sam trade was the prospect we got we feel strongly about,” Adams said of Levi. “Certainly did our homework there. He had a pretty impressive World Juniors and there’s a lot to be excited about, especially at that position, to put in our system.”

4 thoughts on “Moving on: Sam Reinhart, Sabres knew it was time for trade”