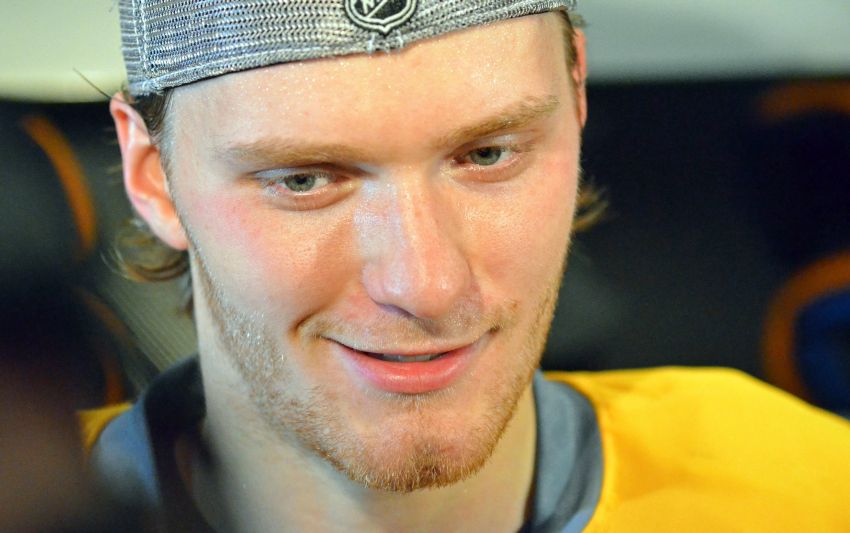 BUFFALO – At some point this week, prospect Mikhail Grigorenko, fresh off a five-goal, eight-point performance in seven world junior championship games, will be returning to the Sabres, interim coach Ted Nolan said.

But will the 19-year-old center be staying in the NHL?

“He’s coming here for Pat (LaFontaine) and I to discuss,” Nolan said Monday inside the First Niagara Center. “We’ll make that decision when he gets here.”

Nolan, however, acknowledged he would prefer to have Grigorenko develop somewhere else.

“We’re leaning that way, yes,” he said after the Sabres prepared for tonight’s home tilt against the Carolina Hurricanes.

Clearly, Nolan and LaFontaine, the president of hockey operations, don’t think Grigorenko’s ready for the NHL. Nolan has spoken about earning a roster spot, not simply being given one.

Despite some slick skills, an iffy compete level and inconsistency have dogged Grigorenko, the 12th overall pick in 2012.

“It’s up to our organization to try to correct that, and you don’t correct by just giving things to players,” Nolan said about the inconsistency. “You make them earn it, and you watch them do it on a consistent basis for a consistent amount of time. You just don’t do it for a week and say, ‘Hey, we’re all fixed.’ No, it’s going to take some time to correct it.”

Grigorenko played three games under the new regime after the NHL rejected his conditioning assignment to Rochester. Then the Sabres loaned him to Russia early last month for his third world juniors, a tournament they hoped would give him some much-needed confidence and playing time.

His tournament numbers look pretty impressive. But Nolan said there are “some mixed reviews” about his play in Sweden.

“I think that’s a problem with some young players, that consistent factor,” Nolan said. “He played great at moments and not so well at other moments. But certain players take a little longer to get that consistency. We have some players in the league that are like that.

With a chance to play for a gold medal, Grigorenko went pointless in Saturday’s 2-1 loss to Sweden. His goal in Sunday’s bronze-clinching 2-1 win against Canada was a pass that deflected off an opponent’s foot.

If the Sabres send Grigorenko back to the Quebec Major Junior Hockey League, something they did last season, he could be traded before today’s deadline. The Quebec Remparts aren’t primed for a playoff run and dealt their captain Monday.

Grigorenko, a frequent healthy scratch, has two goals and three points in 18 NHL games this season. He’s a superstar in the QMJHL.

“When you’re that age and you score a big goal with your peer group, that’s how you get to the next level,” Nolan said. “So he did his country proud and did us proud. Now we just got to wait for him to get here.”

“Those type of players, when you’re a big player, you make big plays,” Nolan said. “The fans here and this organization have something to really look forward to.”

Sabres center Ville Leino, a Finn, added: “You could see he wanted to win. He’s got a lot of will. That’s a big goal, and the way he scored it, he’s going to be a very good player.”

Ristolainen, the eighth overall pick in June, will go back to Rochester, Nolan said. Right now, the 19-year-old’s a national hero in Finland.