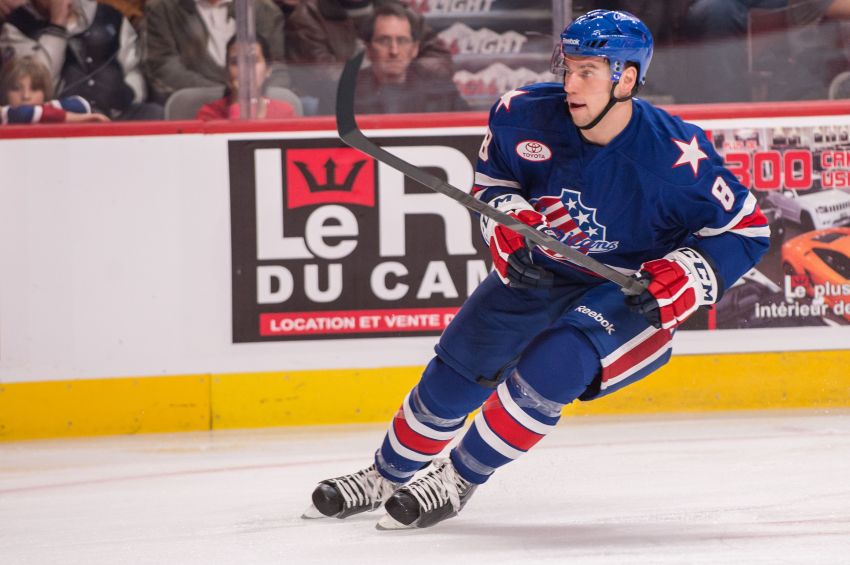 ROCHESTER – In an instant, Cody McCormick vanished from the NHL.

On Feb. 20, the struggling Buffalo Sabres waived the gritty forward mid-practice, then immediately yanked him from the ice, a demeaning exit for a popular veteran who fought 26 times during his 139-game tenure.

McCormick then showered, left the First Niagara Center and went home. He reported to the Americans after clearing waivers the next day, his first AHL stint since 2009-10.

“At no time did they tell me the day before that you might be on waivers or traded or anything like that,” McCormick said Wednesday inside the Blue Cross War Memorial after the Amerks’ season ended in a first-round playoff sweep. “It’s the business.”

In waiving the 30-year-old, former coach Lindy Ruff, just hours before his firing, said the reeling Sabres possessed too many players of McCormick’s ilk.

With agitator Patrick Kaleta and tough guy John Scott also up front, McCormick, who lost some of his effectiveness while battling injuries for more than a year, became expendable.

McCormick, two seasons into a three-year, $3.6 million contract, plans to be at NHL training camp in September.

“If (general manager) Darcy (Regier) has different plans, that’s that,” McCormick said. “But going forward, everything I do this summer is going to be geared toward that training camp and making the Buffalo Sabres.”

McCormick challenged and fought Toronto’s Mike Komisarek on Wednesday, a ferocious heavyweight bout between two veterans trying to get back to the big leagues. He sported a swollen right eye and few cuts following the game.

“That’s not the first time that’s happened,” McCormick joked about his face.

Clearly, McCormick embraced his enhanced role with the Amerks. He skated big minutes again, becoming a go-to guy and a leader while scoring six times in 25 games.

“As soon as I walked in this room all the guys were great guys,” said McCormick, who kept living in Buffalo and commuted daily with Amerks captain Matt Ellis. “The coaching staff was telling me that I’m going to play in so many different situations, and I was playing a more all-around hockey game, and that’s what everybody wants to do is play that game that you grew up playing.

“It’s power play, penalty-kill time – all the situations. I definitely had fun doing that.”

Interim Amerks coach Chadd Cassidy said McCormick and Ellis, who also joined the Amerks in February, had a huge impact, especially on the team’s youngsters.

“There were guys in that room that we could lean on, we could go to and have an adult conversation about our team,” Cassidy said.

But despite being wanted so badly, McCormick’s demotion made him reflect.

“Well, right off the start, it’s an eye-opener,” McCormick said about joining the Amerks. “You take it back and you kind of look at yourself in the mirror and say, ‘You want to do more.’ There’s that other level you want to get to.”

He had experienced the feeling before. In 2009-10, fresh off his first full NHL season with Colorado, the Sabres signed McCormick and assigned him to their old affiliate in Portland.

McCormick possessed enough talent and versatility to play center or wing and skate on any line, qualities Pirates coach Kevin Dineen utilized. He thrived under Dineen, scoring 17 goals while playing in every situation.

“I was a better player for it,” McCormick said about the Portland experience. “So I’m hoping to take that out of this and come out of Rochester a better player.”

The Sabres recalled McCormick during the 2010 playoffs. He played 81 times the next season, compiling eight goals and 20 points while becoming the team’s designated fighter. That earned him his big contract.

But McCormick struggled while battling two concussions in 2011-12. His effectiveness limited, Ruff played him sparingly and even scratched him. He scored one goal.

This season, a finger injury he suffered about a year earlier but played through sidelined him until Feb. 2.

“Being in Rochester has put me in a lot more situations where I hope I can react better at the NHL level.”