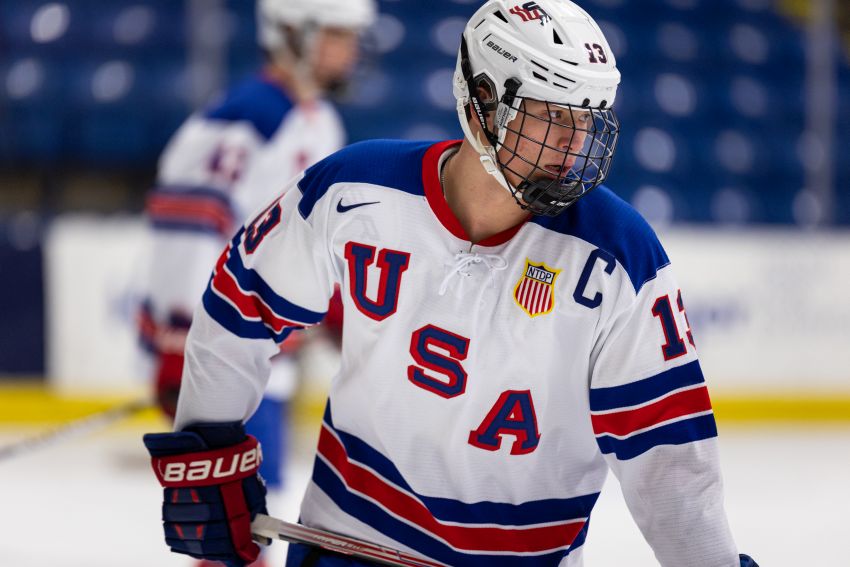 Rutger McGroarty could be available to Buffalo in the first round. ©2022, Rena Laverty, USA Hockey

BUFFALO – One team, reportedly the Montreal Canadiens, asked NHL Draft prospects it interviewed at the Scouting Combine what kind of animal they would be.

Rutger McGroarty, a high-scoring winger with the U.S. National Team Development Program, put some deep thought into his reply. Instead of simply saying he’d be some sort of ferocious beast, he offered two answers based on his off- and on-ice demeanor.

“I said that I was a father gorilla off the ice because (I) lead by example but also can hang out with the family,” McGroarty said Saturday after undergoing fitness testing inside LECOM Harborcenter.

On the ice, however, McGroarty, 18, said he’s tenacious like an “African hunting dog.”

“Just because I feel like I’m a little hunting dog out there, just go after it, forecheck hard, backcheck,” he explained.

Not surprisingly, the affable McGroarty has already captained two squads, including Team USA’s recent entry at the Under-18 World Junior Championship.

“I’m a type of guy that my teammates know I want to make them better,” he said. “I bring my compete, I bring my energy every single game. I feel like I’m a super approachable guy. If someone’s struggling on the ice or off the ice, whatever it is, just go and talk to him, hang out with him, just be there for them.”

Growing up in a hockey family and leaving his home in Nebraska at 10 helped McGroarty, who will play for Michigan next season, mature in a hurry. He has experienced a unique path to next month’s NHL Draft.

His father, Jim, played professionally and later served as the coach and general manager of the Lincoln Stars, a junior United States Hockey League team.

The 6-foot-1, 200-pound McGroarty said he attended his first hockey game when he was just three days old and “was just born into the sport.”

“Being a little kid from Lincoln, Nebraska, it’s a non-traditional hockey market,” he said. “With my dad having the key to the rink with the Lincoln Stars, the Ice Box (arena), I feel like being in that juniors locker room from 5 to 9, I feel like I matured a lot quicker than other 5- to 9-year-old, and I was definitely a big part of my career.”

After McGroarty was spotted at the Brick Invitational, an annual tournament in Edmonton, an opportunity materialized to play for the renowned Honeybaked program in Detroit.

If McGroarty cracks the big leagues someday, he would be just the fourth Nebraska-born NHL player, according to hockey-reference.com. Pittsburgh Penguins winger Jake Guentzel and Winnipeg Jets defenseman Neal Pionk are the only active players from the Cornhusker State.

Of course, McGroarty acknowledged making such a significant move at just 10 was difficult.

“A lot of people called us crazy,” he said. “I felt like it’s definitely worked out to this point, so I don’t regret it.”

He and his father, who coached his son in the Honeybaked program, moved to Michigan during the hockey season while his mother and sister stayed in Nebraska.

McGroarty eventually earned a coveted spot with the USNTDP and has developed into an elite prospect. He could be an attractive option for the Sabres, who have three first-round picks, if he’s available when they select 16th and 28th.

He registered 35 goals and 69 points in 54 games last season, including 15 goals and 33 points in 25 contests the NTDP played in the USHL.

“His competitiveness, his energy,” McGroarty said of the similarities. “I feel like he’s a skilled power forward and I look at myself as the same way.”

McGroarty said he hopes when teams look at him, they see “that competitiveness and that energy.”

“I feel like I’m a winning hockey player and I feel like I bring it every day,” said McGroarty, who has been working to improve his skating, perhaps his biggest flaw. “I want to make my teammates better and I’m in it for the right reasons. I feel like I love playing the team game and coming to rink every single day.

“Once it comes down to the nitty gritty times of the season, I feel like I’m a playoff hockey player and a big boy and I can contribute.”

One thought on “Maturity, skill could make Rutger McGroarty fit for Sabres at NHL Draft”