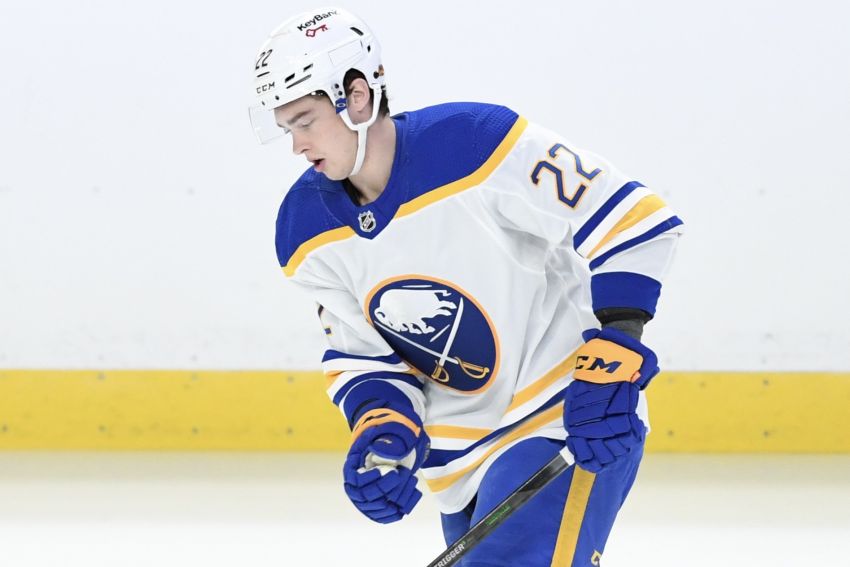 Buffalo prospect Jack Quinn has been a dominant force in Rochester. ©2022, Micheline Veluvolu

BUFFALO – Barely three months ago, when the Sabres informed prospect Jack Quinn he was being sent to the minors, he looked at general manager Kevyn Adams and coach Don Granato and told them he understood their decision.

Quinn’s words that day have stuck with Granato. Yes, Quinn, 20, was disappointed to be leaving. Still, he knew he had an opportunity in Rochester, where he had played 15 games for the Americans the previous season.

The 6-foot, 176-pound Quinn embraced his assignment, quickly morphing into one of the AHL’s most dynamic players. The winger scored four goals in his first three games and has compiled 12 goals and 26 points in 20 contests this season.

“That’s kind of where my head was at before the year, if I was to go to the American League, I wanted to be the kind of player I am, showing what I am right now, kind of dominating that league,” said Quinn, who will make his NHL debut tonight against the Tampa Bay Lightning at KeyBank Center.

Talent alone – and Quinn, the eighth overall pick in 2020, possesses a lot of it – hasn’t buoyed him. He has maturity that belies his age.

“Jack has qualities that 30-year-old guys don’t have,” Granato said. “He knows, he has a sense of what’s going on that you wish some of your older players had. He just has that feel and that’s why he’s been able to accelerate his progress and development. You come into pro hockey and you’ve never experienced it, but he can internalize that faster and more rapidly to apply and adapt, and that’s what you’ve seen in the American League.”

On Monday, the Sabres reassigned Quinn from the Amerks to the taxi squad. He will be elevated to the active roster before the game.

“It’s very exciting,” Quinn said of being in the NHL for the first time.

Quinn practiced at left wing beside center Dylan Cozens and Vinnie Hinostroza. Quinn also skated on the No. 1 power-play unit.

Having been linemates during the preseason and briefly with Team Canada during last year’s World Junior Championship, Quinn and Cozens know each other well.

“He’s got a quick release and his accuracy is pinpoint,” Cozens said. “That goes along with his hockey IQ, which is really good, too. He gets himself in those positions to score and he creates chances to score.”

Teenagers normally can’t play in the AHL until their junior season has ended or their eligibility has run out. But the COVID-19 pandemic forced the Ontario Hockey League to cancel its 2020-21 campaign, so Quinn, who should’ve been playing for the Ottawa 67’s, was eligible to join the Amerks.

While Quinn’s first pro action was limited – he underwent season-ending hernia surgery in April – it proved to be extremely valuable. He said learning how difficult it is to compete against men and enduring some struggles allowed him to identify weaknesses in his game and attack them during the summer.

“There’s a lot of things in the American Hockey League that are just easy for him now after gaining experience a year ago and building on it,” Granato said. “And I think he’s ready for this next new challenge, the timing’s right for him. He’s producing at a rate he certainly wasn’t a year ago, and it’s gotten a lot easier for him there. And there’s still work for him, but it’s gotten a lot easier. Obviously, his statistics prove that.”

Those statistics would be gaudier if Quinn hadn’t recently contracted mono. He missed nine games before returning Wednesday. Quinn said his recovery “wasn’t too bad.”

“I was really sick for about five days right at the start, and then after that, it was pretty easy, to be honest,” Quinn said. “I got to go home to (Ontario). … They told me to take it easy, not to do much, because if you try to do too much too early, it might stick with you, they said. So I just relaxed for a couple weeks.”

Quinn returned to Rochester after Christmas and began ramping up his work. He played three games last week, compiling one goal, two points and 14 shots on goal. He also fought for the first time as a pro.

“My first game back I didn’t feel great, just shape-wise,” Quinn said. “I felt like it took me the first two periods to kind of get back into it. But by the third I was feeling more like myself, and the games Friday, Saturday I felt back to normal, I felt really good.”

Granato was among the spectators Friday at Blue Cross Arena in Rochester when Quinn scored a goal and recorded an assist in the Amerks’ 5-2 win over the Hartford Wolf Pack.

“He’s playing with a lot of swagger right now, which is great,” said defenseman Casey Fitzgerald, who was recently promoted to the Sabres. “He’s definitely coming into his own. … He knows he’s good, but he doesn’t have a big head or anything like that.

“He’s a guy who will do the little things, too, and kind of play that grind game. He’s a guy who plays for his teammates around him. So that’s awesome to see and I’m so happy that he’s getting his shot now.”