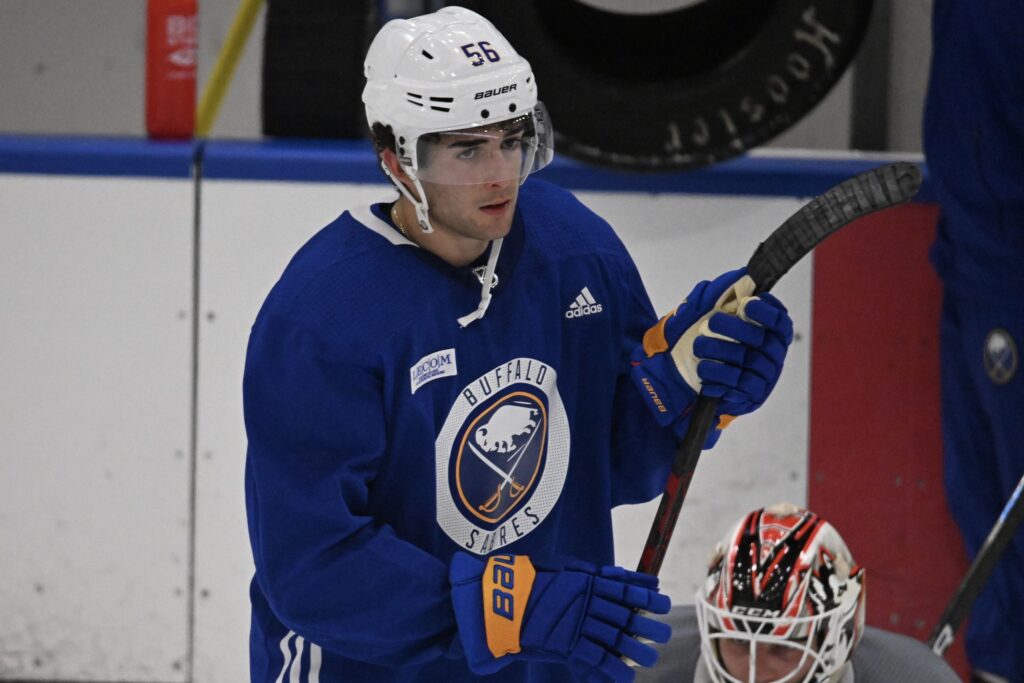 BUFFALO – Sabres prospect Matteo Costantini sees familiarity all around him at development camp.

Costantini starred for three years in the Jr. Sabres organization, which calls LECOM Harborcenter, the site of this week’s camp, its home. The native of nearby St. Catharines, Ontario, spends the summer training at the facility or across the street at KeyBank Center.

If he looks in the stands, he’ll see Buffalo general manager Kevyn Adams, who used to run the Jr. Sabres. Adams drafted him in the fifth round in 2020, 131st overall.

Costantini, a forward entering his sophomore season at North Dakota, was Adams’ third pick as GM, the Sabres’ next selection after forwards Jack Quinn and JJ Peterka.

“It’s awesome being back in Buffalo, definitely a level of comfortability knowing some of the staff within the organization,” Costantini said following Thursday’s session of camp.

On the ice, Nick Tuzzolino, one of Costantini’s coaches with the Jr. Sabres, is helping run some practices this week. Camp invitee Declan McDonnell, a Lake View native, grew up playing with Costantini. The friends have been spending time together all week.

“At the end of the day, he’s very familiar with (the Sabres), they’re very, very familiar with him,” Brad Berry, Costantini’s coach at North Dakota, told the Times Herald on Thursday. “And I think that’s obviously a reason they drafted him. They know what they’re getting, and I think it’s very similar to the fact that’s why he’s in our program.

“We recruit to the player, the skill level and the character of what we want in our culture. And that’s exactly, I think, why Buffalo sees the value in him and wants him in their culture.”

The 6-foot, 173-pound Costantini, 19, has quietly emerged as one of the Sabres’ more unheralded forward prospects. He enjoyed a stellar freshman campaign, quickly adapting to college hockey and earning a spot on the NCHC All-Rookie Team.

“For him to come in as a young player and do what he did, he did a tremendous job,” Berry said.

In making the jump to the NCAA from the junior United States Hockey League, Costantini compiled eight goals and 21 points in 35 games, essentially duplicating his offensive numbers from a year earlier.

He registered seven goals and 22 points in 37 games with the Sioux City Musketeers in 2020-21.

“The reason why he had some success and why he’s going to continue to have success is he’s student of the game; he’s willing to listen and be coached,” Berry said. “And he’s willing to put the work in. Like, he’s a self-motivator.

“We call those guys that are self-motivators that maximize their day … ‘everydayers.’ There’s not a day that goes by they miss out on the opportunities to maximize their growth.”

Costantini’s growth included some bumps he endured as the season wore on.

“Through the middle of the year there was an adjustment period for him,” Berry said. “The second half of the year is little bit faster and tougher and more tight checking, and I thought he did a really good job of adapting to that and finding a way to have success.

“It’s always tough for a first-year player to come in and make an impact that he did. He made a tremendous impact in his first year.”

Costantini also showcased versatility, moving from center, his natural position, to left wing about 10 or 15 games into the season. Changing positions offered him a chance to skate among the top-six forwards.

“It took a while to kind of transition to the wall,” said Costantini, who also played on the power play. “I mean, I hadn’t played it in a little bit. But things ended up working out and it was an awesome year.”

Savoie, a high-scoring center for the Western Hockey League’s Winnipeg Ice, said he was “really close” to being able to skate at camp.

“It’ll be one or two weeks tops before I’m back in the swing of things, taking full contact,” he said. “I skated once or twice before coming down here just to see how it felt. I thought even then it was really close to being back to 100 percent.”

“Just about getting strength back in my shoulder, feeling comfortable with taking contact and continuing to get bigger and stronger,” he said.