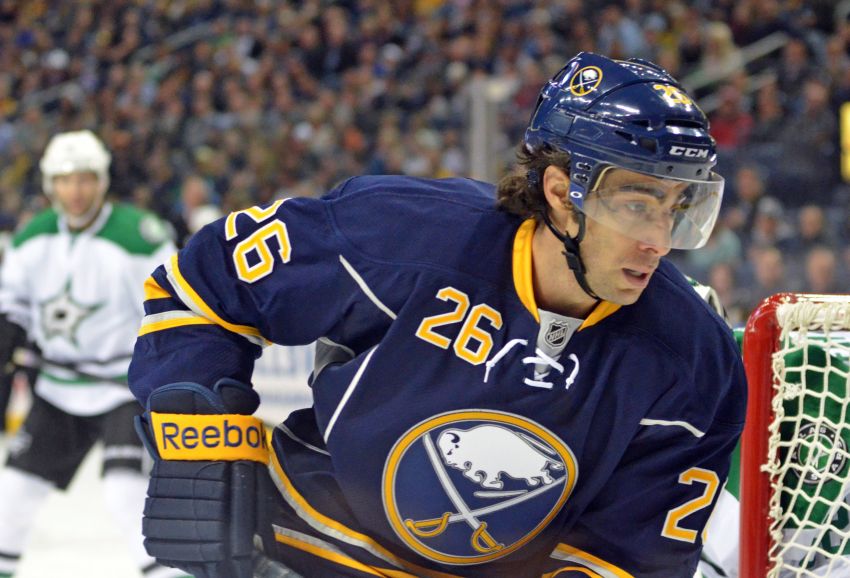 “I used to love coming to Bills games,” Moulson said Monday inside the First Niagara Center prior to scoring twice in his Buffalo debut, a 4-3 loss to former Sabres coach Lindy Ruff and the Dallas Stars. “So it’s a great city. Who knows, it could be for a long time. We’ll see what they have in store.”

Moulson had something special in store Monday, scoring twice, his seventh and eighth goals this season.

“I’m sure I’ll be around the net as usual,” Moulson said hours before the game. “I don’t venture too far from there.”

Sure enough, Moulson scored from the slot 3:26 into the game, one-timing Tyler Ennis’ pass over Stars goalie Kari Lehtonen. Moulson then backhanded a shot from in front as fell to the ice 17:17 into the second period.

Like former co-captain Thomas Vanek, the star winger the Sabres dealt to the New York Islanders late Sunday for Moulson and a 2014 first-round pick and 2015-second round selection, Moulson’s an unrestricted free agent.

Given the Sabres’ sorry state, the 29-year-old Vanek had no interest in re-signing with the rebuilding club.

Following his first practice with the Isles on Monday, the Austrian called the trade “a bit of a shock,” although he wasn’t surprised and he “knew it was going to happen sooner or later.”

“We traded pretty much every veteran,” Vanek told reporters. “The message was clear they were going for draft picks and youth.”

Meanwhile, Moulson, a three-time 30-goal scorer, could be dished again this this season. Still, the 29-year-old said it’s “exciting” to be part of the young group.

Ironically, Moulson is wearing Vanek’s old No. 26 and skated in his spot on the left wing beside center Cody Hodgson.

Moulson took a 4:30 a.m. ride to the airport and arrived in time to skate Monday morning. He was on the couch Sunday night when he learned of the trade, something he called “shocking.”

Miller, who said he’d miss Vanek’s “evil little laugh,” added: “It’s hard to watch all of them go. It’s no different each time. All these guys have been close friends and great hockey players.”