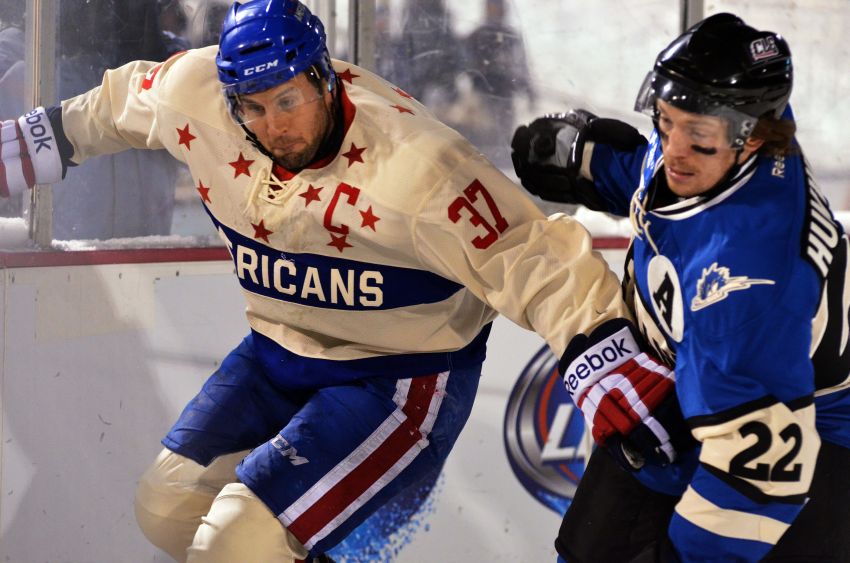 ROCHESTER – From a skill perspective, Chadd Cassidy had better options six rounds into Friday’s wild shootout. But the Americans coach wanted Matt Ellis, his trusted captain, to try to win the “Frozen Frontier,” an outdoor game played in 18-degree temperatures.

“With the game on the line, I want it on his tape because good things happen to good people,” Cassidy said. “There’s nobody that’s worked harder for the opportunities that he’s gotten than Matty.”

Ellis, who had already had a goal and an assist, rewarded his coach’s faith, scoring the winner in the Amerks’ crazy 5-4 win against the Lake Erie Monsters, a game they rallied from a two-goal deficit in regulation and the shootout.

Somehow, Ellis’ night got better after the memorable game.

The Sabres recalled the 32-year-old center following the game, the Times Herald has learned. They host the Calgary Flames this afternoon inside the First Niagara Center. Interim Sabres coach Ted Nolan was reportedly watching Friday.

Ellis hasn’t played in the NHL since the Sabres waived him in February.

Incredibly, Ellis had never taken a professional shootout attempt before.

What was his strategy?

“Use the move that works in practice and not lose the puck,” said Ellis, who used his forehand to beat goalie Calvin Pickard. “I was excited to get the tap. I figured that move finds a way to get in the back of the net against our goalies the odd time in practice. I figured I’d go that route as well.”

Ellis’ goal capped a night that will quickly become part of Rochester lore.

They trailed 3-1 following the first period before rallying to take a 4-3 third-period lead.

Then, Lake Erie’s Matt Hunwick scored on a six-on-four with one-tenth of a second left, stunning the 11,015 fans at Frontier Field.

“It’s emotional,” Ellis said. “It’s one of those things, you’re watching the clock. You’re waiting for the buzzer to go.”

Mike Zigomanis kept the shootout alive and Johan Larsson tied it before Cassidy called on Ellis.

“What a game,” Cassidy said. “You saw a little bit of everything out there tonight. I was really proud of our guys’ effort coming back from two goals down on not (an) ideal situation with the ice. Guys kept battling, we started playing the right way.”

Luckily, it stopped snowing before the game, although several inches covered the grounds.

“Sure, it was cold,” Ellis said. “But when that adrenaline’s pumping, when that puck’s dropped, you really don’t feel the elements. The snow held off, which was nice, and it wasn’t really windy out there. It was a great experience.”

Ellis said he “felt like a kid again out there.”

“Being able to share this with this these guys, the one thing I said to a couple of the guys was, ‘Really enjoy the experience,’” he said. “For me, it’s the first time in 12 years.’”