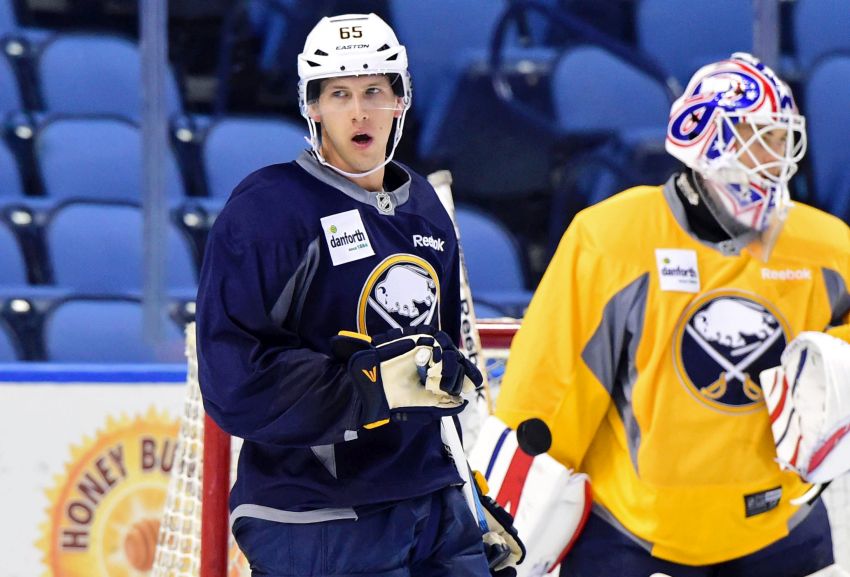 ROCHESTER – It’s easy to forget, but almost four months ago, Matt Donovan made the Buffalo Sabres’ roster out of training camp and briefly stayed as the eighth defenseman.

After sitting out three games as a healthy scratch, the Sabres sent Donovan, 25, to the AHL, where he has quietly resumed a career that stalled last season with the New York Islanders.

Sure, getting demoted to the Americans was disappointing. But simply having an opportunity to play regularly has jumpstarted Donovan, who has six goals and 16 points in 43 appearances this season.

Donovan, the NHL’s first Oklahoman, played only 12 regular-season games in 2014-15, meaning the Isles scratched him a whopping 70 times. Naturally, becoming the sparest of spare parts was difficult. A year ago at this time, he was in the midst of a 67-day stretch in which he didn’t play. The high-scoring defenseman lost most of the momentum he had generated early in his career.

Slowly, Donovan said, he has been finding his old groove. His game is “starting to click” and “get back to me,” he said.

“Not exactly where I want to be, but I’m getting there,” Donovan said Wednesday after scoring two goals in the Amerks’ 6-5 overtime win against the Syracuse Crunch inside the Blue Cross War Memorial.

Donovan felt like he pretty much missed a full year of hockey.

“I was practicing and stuff every day and practicing against some of the best players in the NHL,” he said. “I didn’t lose it completely, but (you) definitely got to find your game again.”

That game is usually slick. Donovan was one of the AHL’s top offensive defensemen with the Bridgeport Sound Tigers from 2011-13, averaging 12 goals and 47 points a season before the Isles promoted him for good two years ago.

“I’ve done it before … so that’s what I expect out of myself and that’s where I want to be,” Donovan said about his offense.

“I don’t know if I can I compare him to Paul Coffey a little bit where he’s able to pass and wants to go,” Cunneyworth said. “Paul wasn’t the greatest defensive defenseman. You always slot him with somebody who was a stay-at-home kind of guy.”

Occasionally, Donovan’s offense-first mentality gets him into trouble, Cunneyworth said.

“No matter what, he has stayed true to his nature,” he said. “I think he loves to score goals, he loves to jump into the rush. He’s, at times, overdone it. But tonight he shot with good screens, timing was good, and that’s all we’re asking.”

Donovan’s skills impressed the Sabres so much they signed him to a one-year, two-way contract on July 1 worth $400,000 in the AHL, according to generalfanager.com

Given Donovan has played 67 NHL games and defensemen usually get injured, it was assumed he might earn some action in Buffalo. But the Sabres have carried eight defenders all season and stayed somewhat healthy. Other than summoning Jake McCabe from a quick one-game assignment and Mark Pysyk from a short conditioning stint, they haven’t recalled a defenseman.

At some point, though, Donovan might get back up.

“I think I had a good camp,” he said. “Obviously, they liked something. I made the team out of camp. Obviously, something changed or whatever it was. Now it’s just getting back up there.”