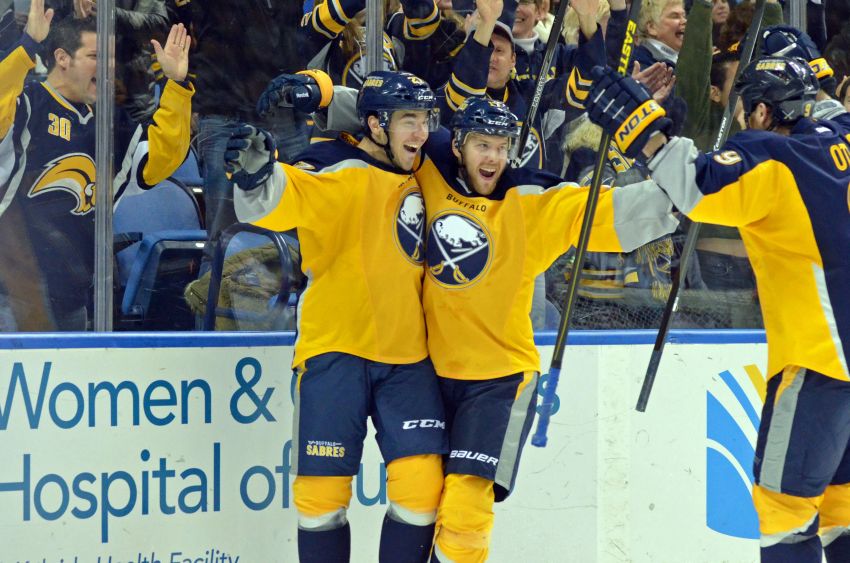 BUFFALO – Ted Nolan wanted 10 percent more from Matt D’Agostini. Prior to the Sabres’ 2-1 win against the New Jersey Devils on Saturday, the interim coach said the struggling winger, who hadn’t scored in 15 games with his new club, was getting opportunities.

“You got to go into those dirty areas,” Nolan said Saturday morning. “I think he had a number of outside shots. But outside shots ain’t getting in. So we got to get a little bit closer. We got to get our bodies in front of the net.”

About 10 hours later, D’Agostini zoomed to the net with the Sabres up a man, backhanding a shot past New Jersey goalie Cory Schneider, his first goal in his 24th game this season.

“We kind of talked about getting inside on them a little more,” D’Agostini said after scoring his first goal since April 18. “For myself, I’ve been skating good, getting shots, but most of them on the outside. Getting inside and getting to the net is where you get most goals on this league.”

Does D’Agostini feel like a weight was lifted off his shoulders?

“I was trying not to think about it,” he said. “But as the games go by it’s kind of hard not to.”

Believe it or not, the Sabres, who have 12 wins all season, have won five straight inside the First Niagara Center.

For nearly 40 minutes, the anemic clubs generated little offense or excitement before the capacity crowd of 19,070 fans.

New Jersey sprinkled seven shots on goalie Ryan Miller during the first period. The Sabres, meanwhile, put four on Schneider, who had a 15-save shutout Nov. 30.

The teams traded some chances in the second period, though, and Matt Moulson finally broke the scoreless tie at 19:29, converting Tyler Ennis’ wraparound attempt in front on the power play.

Minutes earlier, Miller, who made 21 saves, stoned Adam Henrique on a partial breakaway with the Sabres on the power play.

“It kept us in the game,” said Nolan, who added Miller was “sensational again.”

Luckily, the entertainment level picked up during the third period.

At 7:02, Tyler Myers hit Dainius Zubrus high along the wall, earning a minor for an illegal check to the head and putting the Sabres two men down.

Michael Ryder converted from the bottom of the left circle at 7:46.

Does Myers think he’ll be getting a call from NHL disciplinarian Brendan Shanahan?

Zubrus stayed in the game. Nolan said he hadn’t seen the hit. He said in that situation he wants Myers killing the penalty, not looking for a big hit.

The Sabres’ power play, which began the night one of its last 22, scored twice for only the second time this season.