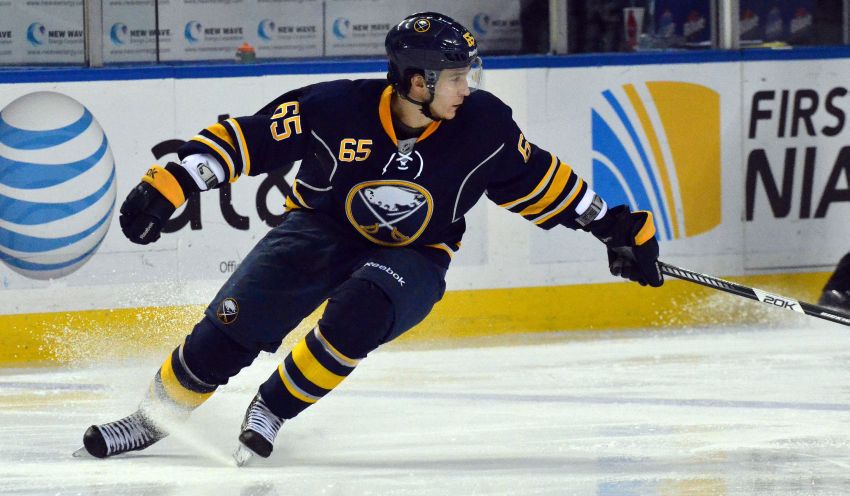 BUFFALO – It appeared their time together could be brief. When interim Sabres coach Ron Rolston put Marcus Foligno, Kevin Porter and Brian Flynn together on a line March 5, he united two recent recalls with Foligno, a struggling rookie fresh off his first NHL benching.

All three had never played together during nearly four months with the Rochester Americans.

But Rolston, the Amerks’ coach until his Feb. 20 promotion, knew their talents. With the Sabres struggling to stay out of the Eastern Conference basement, he had little to lose.

Four games later, the trio has turned some heads, producing offense and playing a steady style.

“We feel fully confident (in the line),” Rolston said Thursday following practice inside the First Niagara Center. “Even in our end and playing against anybody, they’re very responsible, too, and that’s a good thing to have.”

Foligno scored twice in Tuesday’s 3-1 win over the New York Rangers, the left wing’s best game this season. Flynn, just six games into his NHL career, has two goals in the last three contests. Porter, a Rolston favorite, is a two-way veteran center.

Rangers coach John Tortorella lauded the line during a memorable postgame rant Tuesday, the only credit he gave the Sabres.

“We have a little bit of youth to our line,” Foligno said. “We’re all from Rochester. There’s always in the mind we can always go back there. I think that’s what makes us work hard. We really want stay up here.”

The three complement each other well. Flynn and Porter are both speedy. Foligno, at 6-foot-3, provides the size.

“Marcus is strong, wins a lot of pucks down low,” Flynn said. “It’s tough to take the puck from him. (I) can use my speed on the outside. And in the middle Ports is a great two-way center, does a good job in our zone getting pucks out and gets the puck to us along the wall.”

Rolston added: “They’re building some more chemistry up. I think Brian Flynn is getting more comfortable here. You can even see it in practice. Him and Kevin Porter have a lot of speed. Marcus can get going.”

Simplicity and hard work has certainly helped the trio. The players have been creating offense from a strong forecheck and getting pucks deep behind the opponent’s defense.

On Tuesday, Foligno, who tallied once with another line, recaptured his elite form from late 2011-12, thumping opponents as he buzzed around the ice. He scored both goals at the net.

“I was doing my job,” said Foligno, who had just one score in 25 games before the tilt. “I was sprinting and getting guys the puck, and that was the biggest thing that led to my two goals.”

It was a year ago at this time the 21-year-old started his dynamic late-season run.

Could one game buoy him?

“Yeah, I think so,” Foligno said. “I feel a lot better out here today. I just feel the confidence is a lot better.”

Less than two weeks into his first recall, Flynn looks like a future 25-goal man. Scoring in just his third NHL game helped the 24-year-old’s confidence.

“I thought I had a good game the game before I scored my first against Carolina (last Tuesday),” Flynn said. “I was a little frustrated I didn’t score. But it’s so hard to score goals, especially five-on-five. So you got to keep telling yourself that and just stick with it.”

Flynn’s wheels have wowed Foligno, who played beside him in Rochester with Cody Hodgson.

“I think in the AHL sometimes he might’ve been a little bit too quick for some of the guys,” Foligno said about the rookie. “He almost ran into their players because those guys weren’t ready for the type of quickness he had. He’s got the hands, and he’s got the smarts and the vision for this league.”

With 173 games of NHL experience, the 27-year-old Porter is the line’s elder statesman. His AHL offense – 15 goals and 44 points in 48 games – hasn’t translated to the big leagues, though. Porter has only one assist in 10 appearances.

“Every game you get a little more comfortable,” said Porter, who scored 14 goals with Colorado two years ago. “But I got to start chipping in more offensively. I’m playing well defensively, I think.”

Flynn and Porter know they can’t slip up. Tyler Ennis, Patrick Kaleta and Ville Leino will all likely return this weekend. Someone could sit or get sent back to Rochester.

“There’s obviously going to be some decisions made, and I know that,” Flynn said. “My job is just to do the best I could and hopefully make the decision as hard as possible.”