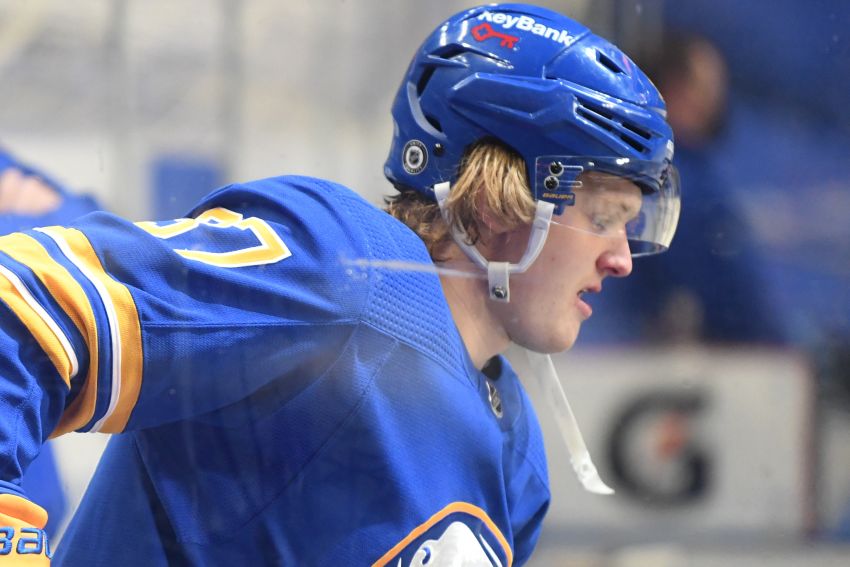 When Don Granato took over the Buffalo Sabres, Casey Mittelstadt had mustered one goal while mostly being utilized as a third- or fourth-line winger in his limited action.

Mittelstadt, 22, ended the season as the Sabres’ No. 2 center. After stints in the minors and on the taxi squad over the last year and a half, he developed into a consistent scoring threat, compiling nine goals and 17 points in the final 22 games.

The American, the eighth overall pick in 2017, credits Granato for his sudden emergence in his third NHL season.

“A lot of guys, including myself, owe Donnie quite a bit,” Mittelstadt said on a Zoom call following Saturday afternoon’s 1-0 loss to the Pittsburgh Penguins in the season finale. “He challenged me when he took over and pushed me to become a better player. I think it’s that simple.

“I think a lot of the strides he’s made are partly because of him pushing me or a lot to do with pushing me. Obviously, we don’t know what’s going to happen, but I owe Donnie a huge thank you.”

A slew of players who struggled under ex-coach Ralph Krueger started thriving under Granato, whose future in Buffalo is uncertain.

Granato inherited a wretched team 12 losses into an 18-game winless skid. After losing their first six outings under Granato, the Sabres started grasping his aggressive system and embraced an opportunity to play an up-tempo style.

They finished the season on a 9-11-2 run, beat the Penguins, Boston Bruins, New York Islanders and Washington Capitals in the final weeks. Considering the Sabres endured one of the worst stretches of an NHL team in recent memory, sniffing .500 is significant.

Mittelstadt, of course, wasn’t the only player Granato challenged.

“He challenged a lot of the younger guys,” Mittelstadt said. “I think that makes a big difference. Give guys kind of a kick in the (butt) and get them going. I think there was also more pressure within the lineup, guys being in and playing well.

“I think that makes a difference. Guys pushing each other for spots.”

Granato, 53, clearly enjoyed his run as interim coach. He often acknowledged while the losses hurt, he was having fun.

After 24 years of coaching, Granato, who joined the Sabres as an assistant in 2019, seemed to seized his first opportunity to run an NHL bench.

Granato said following Saturday’s game he plans to meet with Adams today. Having just dropped the season finale, he did not want to talk about his future.

After Thursday’s ugly 8-4 loss to the Penguins, the Sabres responded in front of goalie Michael Houser, a Pittsburgh native who took the defeat hard.

“It’s hard to just let go of what just happened,” Granato said of Saturday’s contest. “I’m still thinking about our game today. The preparation that went into it. I thought our guys did an incredible job with adjustments. We were too loose the other day. We talked about playing too pond-hockey, too much like pond hockey the other day, and we tightened things up.

“We made a lot of improvements and I was very proud of that. So all of that is on my mind, and I can’t even go anywhere else actually.”

Granato said he was “honored to have the position of being in charge to make the decisions I’ve had to make.”

“That in itself is a lot to be proud of,” he said. “You have a job like this and then you’re surrounded by good people, good players. As a coach, you have nothing if you can’t push guys. And I really felt the best thing was to be able to push guys. Guys wanted to be pushed. They wanted more. They felt they could give more, and they had more within themselves.

“And that was something very nice and very special to have as a coach. But I guess, just proud to be in the position and be with the group that we had.”

Notes: Penguins goalie Maxime Lagace made 29 saves for his first NHL shutout. He hadn’t won a game since Dec. 9, 2017. … The Sabres were shut out nine times in 56 games this season. … Houser made 22 saves in his fourth straight start. … The Sabres used the same lineup for the second straight game.

7 thoughts on “Many Sabres thrived with Don Granato: ‘I owe Donnie a huge thank you’”