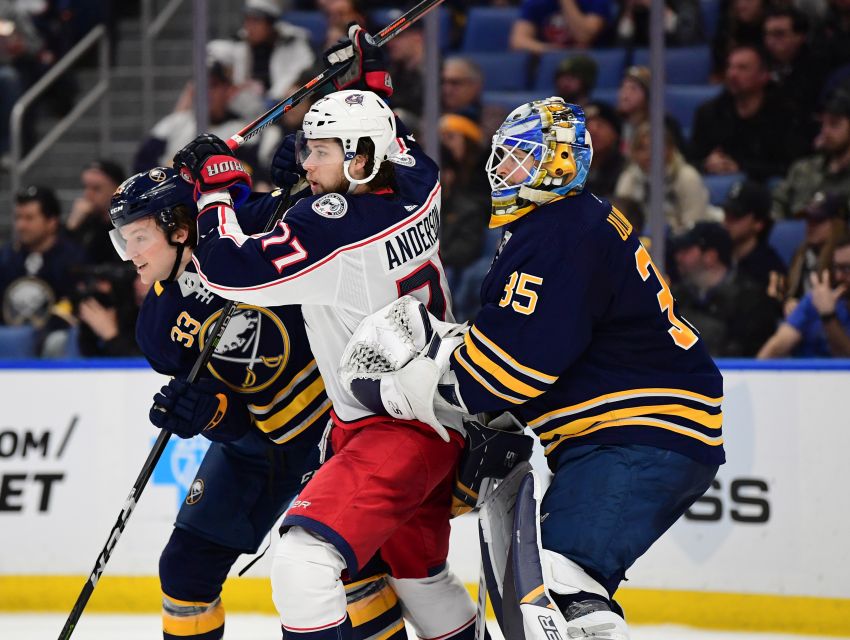 BUFFALO – By the middle of the winter, Linus Ullmark was beginning to steal games from Carter Hutton and supplant him as the Sabres’ starting goalie.

Ullmark, 25, began this season splendidly, compiling a sterling 9-1-3 record in his first 14 outings. He didn’t suffer a regulation loss until Dec. 8.

After Hutton and the Sabres started slumping, Ullmark remained a reliable presence most nights. It looked like he would become the undisputed No. 1 goalie in the near future.

Fast forward to today, and Ullmark, who endured a rough night in Sunday’s 4-0 loss to the Columbus Blue Jackets, is in the midst of a six-week slump.

Yes, the hapless Sabres, who have lost seven straight games (0-6-1), have often given him little help. Still, Ullmark has been showcasing little of his early-season form.

The Swede has been performing like a goalie who has lost much of his confidence.

Ullmark, of course, wouldn’t acknowledged that. Long ago, he embraced the Swahili phrase “Hakuna Matata,” which translates to “no worries.”

Even after Sunday’s game, he smiled.

“There’s always going to be some bad games during the season,” Ullmark said following his 32-save effort. “Obviously, that (stinks). But it hasn’t been like I’ve been playing really bad or something like that.

“Yeah, I let a couple goals in that I think I could’ve made. But also that could’ve been something that happened because of the situation we’re in. I don’t know.

“Hockey’s a wonderful sport sometimes; and sometimes it’s the worst game in the world.”

Ullmark couldn’t get across the crease on Nick Foligno’s wraparound goal that put Columbus up 17:47 into game. Josh Anderson beat Ullmark between the legs from the left circle to make it 4-0 15:31 into the second period.

“Sometimes it doesn’t go your way,” Ullmark said of his recent stretch. “Obviously, it hasn’t gone the whole team’s way, so you kind fall into the same kind of mindset even though you try to stay positive at all times and do what you’re doing best. Pucks have been going in, nothing I can do about it. I just go out there and try to do my best.”

When asked about Ullmark’s struggles, embattled Sabres coach Phil Housley said, “There’s a lot of guys that have lost confidence.”

Right now, having lost 20 of their last 23 outings (3-17-3), the Sabres are the NHL’s worst team. They finished March a wretched 2-12-2. Opponents shut them out five times during the month. They also lost a 5-1 road contest to the New York Islanders on Saturday, meaning they got outscored 9-1 over the weekend.

Mercifully, only three games remain in one of the worst seasons in franchise history.

Fans have had enough of the Sabres. The announced crowd of 17,990 inside KeyBank Center booed them off the ice after every period. Shortly after Anderson’s goal, they responded to a simple glove save by giving Ullmark a Bronx Cheer.

In the third period, a small group in the 300 level began chanting, “Fire Housley.” Fans responded to the announcement one minute remained in the game by cheering.

“They have a right to be mad,” Sabres winger Kyle Okposo said. “They have a right to be (ticked). The second half of the year hasn’t gone as planned. It’s just, last night we were lifeless, today it was a little bit better but it was 4-0. It’s not good enough. We’ve got to give them something to cheer about, and we didn’t tonight.

“They’ve got a right to be upset. They’ve been through a lot of aches, a lot of heartache, and we need to be better for them.”

Housley said: “I understands the fans’ frustration. Guys are frustrated. They want to do better at home here.”

“Everyone is competing for something,” McCabe said. “We’re not quitting. We’re showing resiliency. Guys are battling through the end, and obviously we continue to end up on the wrong side of things right now, but we’re going to continue harping (on) competing and work ethic.”