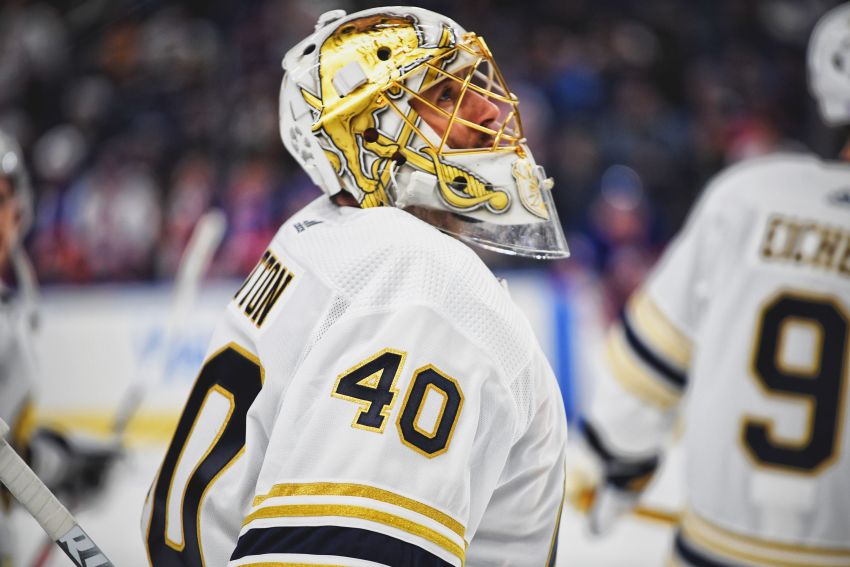 BUFFALO – If Carter Hutton were performing close to his usual standards, the Sabres goalie would likely start tonight’s home game against the St. Louis Blues.

Hutton, 33, spent two seasons with the Blues, playing 61 games before signing a three-year, $8.25 million contract with the Sabres.

The veteran, of course, probably wants to face the Blues, the defending Stanley Cup champions, badly.

But for the for the ninth time in the last 12 games, Sabres coach Ralph Krueger will likely use goalie Linus Ullmark.

Ullmark, at least for now, has wrestled away the starting job.

Following a scorching 6-0-0 start, Hutton suddenly started struggling, a rough period he called “one of the tougher stretches of my career.” He hasn’t won a game since Oct. 22.

“It’s tough just trying to compete all the time,” Hutton told reporters Saturday afternoon in Vancouver after making 26 saves in the Sabres’ 6-5 overtime loss to the Canucks. “I don’t know, it feels like I’m swimming out there a bit.”

In his last nine outings, Hutton has compiled a wretched 0-5-4 mark with a 3.99 goals-against average and an .875 save percentage.

A goals-against average over 3.00 or a save percentage under .900 doesn’t cut it in today’s NHL.

“There’s a reason why my starts have been spread out,” Hutton said. “Linus has outplayed me, he’s done his job and that’s a good thing. All I can do is control my attitude and the way I come to work.”

Hutton has allowed five or more goals six times during his slump. Still, having suffered six one-goal losses over that stretch, he probably should’ve earned at least a win or two.

“When that kind of momentum works against an individual player, you just have to work with him to stay in what are his fundamentals,” Krueger said of the close defeats.

Naturally, Hutton’s losing streak has taken a toll on him – “It wears on me, for sure,” he acknowledged – and sapped some confidence.

“All things considered, it’s been a tough go, but thank God I had a good start,” he said.

Following Saturday’s game, Hutton said he must “trust myself a little more.” Early in the contest, for example, Canucks winger Josh Leivo beat him from the right circle, a shot he probably should’ve stopped.

“I start thinking about backdoor passes and plays moving and I get myself a little unsquare,” he said.

Hutton, however, shouldn’t be counted out.

He has morphed from an undrafted nobody into a seven-year NHL veteran. His .931 save percentage led the NHL two years ago. He played a career-high 50 games last season, when he rebounded late in the campaign following a slump.

“One thing I don’t doubt,” Hutton said, “is my work ethic to come back.”

Following Sunday’s 6-5 overtime victory in Edmonton, winger Kyle Okposo acknowledged the Sabres wanted the game for Krueger, who coached the Oilers during the lockout-shortened 2012-13 season.

“We talked about it in between periods and this morning, and we wanted to get a win for him,,” Okposo told reporters. “We know how much it meant to him. Things didn’t end well here for him. He wouldn’t say it, but I know this game meant a lot to him.”

Krueger, who was famously fired over Skype by former Oilers general manager Craig MacTavish, called the win a “special gesture.”

“It’s real nice, they know the story and they know the history,” he said. “We’ve got an honest culture in there. We’re just out for each other. It was a beautiful victory, really, tonight here, especially because of the character we showed to get it.”

The Sabres, who had Monday off, had lost five straight games in overtime.

They’ve earned points in seven of the last nine games (4-3-2) and rank third in the Atlantic Division.

The Sabres’ surfeit of forwards and defensemen means they’ve been scratching some notable names.

On Sunday, forward Casey Mittelstadt sat out for the first time this season, while defenseman Jake McCabe, an alternate captain, was also benched for the second time.

Mittelstadt, 21, has scored just one goal in the last 21 games.

“The numbers game we have going on here, whether it’s Casey or Jake, right now, we’ve got excellent people right through the roster,” Krueger said. “We like our depth on both positions

“For Casey, it was a day to take a breath, take a watch from the outside and learn.”

Listen to my podcast here with @NHLAdamK on the Sabres’ highs and lows, Jack Eichel rising to the league’s elite, West storylines, the Caps and Bruins crushing and more: https://t.co/WAkRnmNKKz. Thanks to @Vinciguerra_CG. @BillHoppeNHL @SabresBuzz