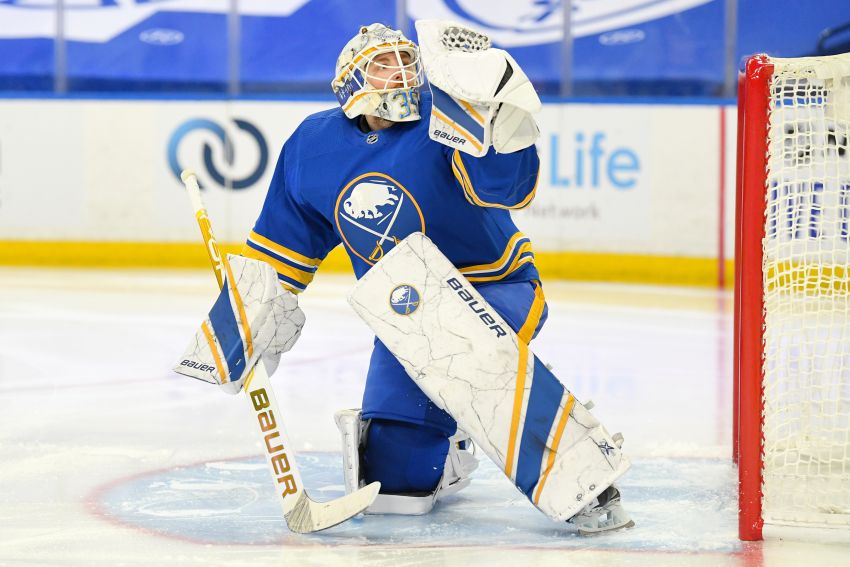 Ullmark, 27, skated out from his crease, tilted his head back and closed his eyes. The much-needed win, just the Sabres’ second this season, capped an emotional week for the goalie, whose father passed away last week.

“It’s been rough, definitely,” Ullmark said on a Zoom call following his 28-save performance. “There’s a lot of emotions and thoughts that had to be processed and I’m trying to take it day by day. Try to be happy when I’m happy; try to be sad when I’m sad.

“And right now, I’m utterly grateful for getting a win.”

Justin Schultz’s pedestrian point shot beat a screened Ullmark early. Then almost halfway through the third period, Backstrom scored the from below the goal line, tying the game at 3.

“I had two weak goals against and I think we should’ve won this in regulation,” Ullmark said.

But Ullmark settled down late, stopping Backstrom’s breakaway in overtime and all three shootout attempts after Sabres captain Jack Eichel scored in the first round.

“When you look at the goals, a couple of them he would like back,” Krueger said. “But he made multiple saves to give us a chance to even win today. So overall an excellent game for Linus. … We thought he’s come to play and he’s shown us the goalie he can be down the end stretch of the game.

“He’s showed a lot of perseverance with the type of pressure they were putting on him, because we were not on our A game defensively early and he needed to be sharp.”

The Sabres earned three out of four points against the Capitals, who played Sunday without injured forward Tom Wilson (lower body), one of five regulars out of the lineup.

Staal put the Sabres up 3-2 7:24 into the third period before Backstrom’s power-play goal knotted it.

The Sabres’ power play had been in a rut, having converted just two of nine chances this season. So what changed Sunday?

“They just moved the puck much quicker and we weren’t as static in our positions,” Krueger said. “You could see Jack on one side or the other. We’ve been trying to get them to be less predictable but still keep the puck speed up. It was good to see the second unit scoring (with Staal’s goal), because what’s really important to have a successful power play is that both are threatening and both are effective.”

The Sabres had been playing well five-on-five, outchancing their opponents and often clamping down defensively. But they hadn’t been rewarded.

In their 2-1 home loss to the Capitals on Jan. 15, for example, they clearly outplayed them but couldn’t convert their scoring opportunities. The Sabres also lost to Washington 6-4 on Jan. 14.

On Sunday, they struggled but their power play bailed them out.

“We definitely deserved one win out of these four,” Krueger said. “It wasn’t necessarily what I would call a solid or pretty win, but it was an extremely important one, and we had to dig down a few times again after disappointment and found a way, which it could be we come out of this stronger than if this win today would’ve been an easy one.

“But overall just pleased with the heart and soul but not really with the overall performance tonight.”