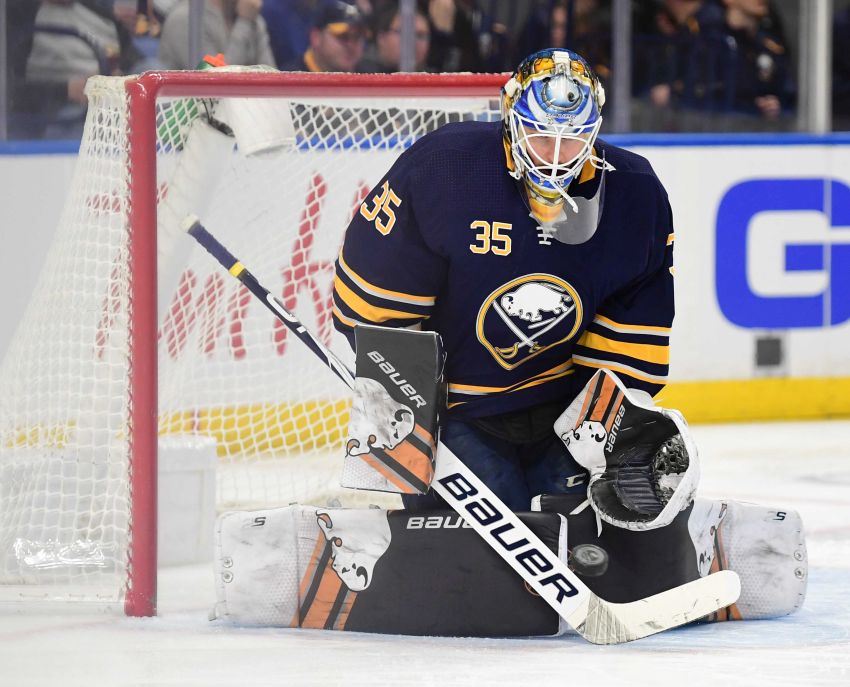 BUFFALO – Sabres goalie Linus Ullmark could’ve been forgiven if it took him a little time to acclimate to his new role as a backup, perhaps the NHL’s toughest job.

No. 2 netminders often go a week or more without playing. When they finally start, they often receive the second of back-to-back games.

But Ullmark, 25, has transitioned nicely into his new gig, winning eight of his first 13 appearances subbing for No. 1 goalie Carter Hutton.

Saturday’s 3-0 win over the Anaheim Ducks might’ve been the finest of Ullmark’s 39 NHL outings. The Swede stopped 40 shots, including 15 in the third period, for his second shutout this season.

“The boys are going to be a little tired the second day, so for me, it’s about being mentally sharp even more when I get in there,” Ullmark said.

Ullmark became the first Sabres goalie to post a shutout of 40 or more saves since Chad Johnson stopped 44 shots on Dec. 17, 2015 against the Ducks. Johnson, ironically, was Anaheim’s backup Saturday.

Thanks to their 21st win, having earned 47 points, the Sabres head into a four-day Christmas break in third place in the Atlantic Division.

Ullmark has been a huge contributor to the Sabres’ climb up the standings. Among goalies who qualify, his .922 save percentage ranks 10th in the NHL.

“He’s developed as a good pro,” Sabres winger Evan Rodrigues said. “I think he’s always ready, he competes in practices and he’s just a hell of a goaltender at the end of the day. …

“He’s been relishing his opportunity.”

So are plenty of other Sabres, including rookie defenseman Rasmus Dahlin, whose first-period power-play goal, his first score at home and fourth overall in 37 games, held up as the winner before the capacity crowd of 19,070.

“I’ve been waiting for it,” Dahlin said of a goal inside KeyBank Center. “It was a great feeling. I’ve never scored in front of these kinds of fans. It was good that the first one was in a win.”

Dahlin has already compiled 20 points, the 10th-most ever recorded by an NHL defenseman before his 19th birthday. Ironically, Sabres coach Phil Housley holds the record of 57 points in 1982-83.

The Sabres planted the seeds of Saturday’s win late in Friday’s 2-1 road loss to the Washington Capitals. While they dropped their second straight game, they finished strongly, receiving strong contributions from the fourth line of center Johan Larsson, Zemgus Girgensons and Tage Thompson.

Housley said prior to the game he wanted to utilize all four lines, and sure enough, he started Larsson’s line and kept rolling his trios over.

“We got into a really good rhythm,” Housley said. “We managed the game really well in the first two periods. As a result, we got a lot of zone time and some quality looks.”

Rodrigues said: “We kept things short, rolled them over, stayed in the zone. I think when everyone’s getting touches early, it gets you more confidence, it gets you in the game, you’re not chasing it.”

“I don’t know how much that counts,” Sheary said. “It looks the same on the score sheet, I guess.”