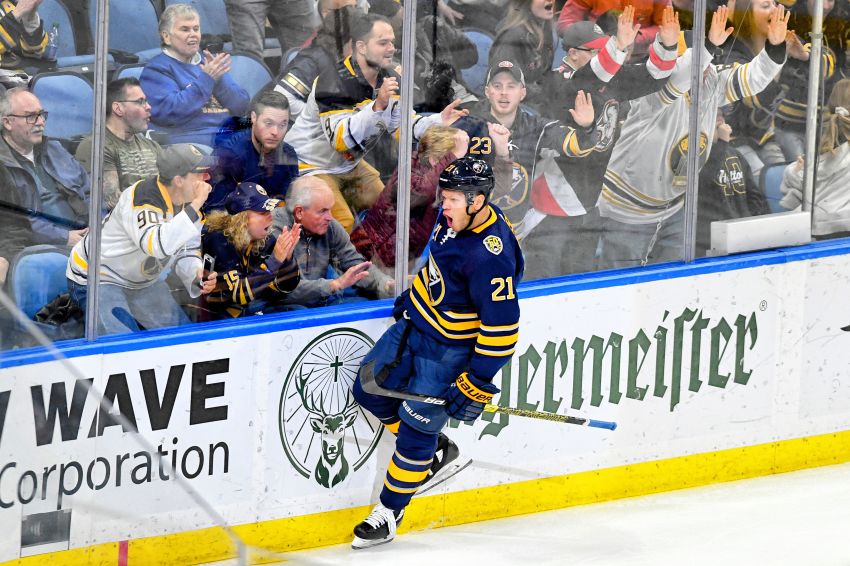 BUFFALO – Suddenly, the Sabres have roared back into the playoff chase. A few dreadful losses over the past month seemed to extinguish their faint hope of playing meaningful games down the stretch.

But a perfect weekend moved the fifth-place Sabres to within six points – in these parts, that’s meaningful – of the sputtering Toronto Maple Leafs, who own the Atlantic Division’s final playoff spot.

The trade deadline hits at 3 p.m. today. Are the Sabres, who beat the Winnipeg Jets 2-1 on Sunday afternoon, buyers or sellers?

The Sabres’ eight-year absence from the playoffs has become a black cloud hanging over them. Shouldn’t general manager Jason Botterill go for it and try to infuse more talent?

“We made Jason’s job a little more difficult, which that was our goal is,” Sabres winger Kyle Okposo said after scoring both goals in Sunday’s win. “We like the group that we have in here. We think that we’ve shown some resiliency that’s been missing in the past. It’s shows that we’re turning the page.”

The Sabres also beat the Penguins 5-2 on Saturday afternoon in Pittsburgh and have won five of their last six games. Of course, their only setback in that span was Tuesday’s awful 7-4 road loss to the Ottawa Senators.

Following Saturday’s complete effort, the Sabres eked out a victory over the Jets before a crowd of 17,805, at times riding rookie goalie Jonas Johansson’s stellar performance in his first NHL win.

“It’s a huge win for us, gritty,” said Okposo, who scored the game-winning goal 7:47 into the third period. “(We) definitely didn’t have our best tonight but we found a way to win, a sign of a maturing team.”

The Sabres don’t play another game at KeyBank until March 5. They start a four-game road trip Wednesday against the Colorado Avalanche.

“Got to win games, got to win,” Okposo said. “This is our playoffs right now. I think everybody knows what we have to do big picture. …

“It’s fun when you play a game like today. You don’t play your best, but you know you need two points and you get it. So huge testament to all the guys in the room, and we’re looking forward to playing some meaningful hockey.”

Sabres coach Ralph Krueger said: “If anybody thought these two games weren’t meaningful, they don’t get what’s going on here. They were extremely meaningful and the guys are learning how to play meaningful games.

“That’s what the goal of the season is, really, as many of these as possible.”

A year ago on this date, the Sabres had the same number of points (66) and added established player – defenseman Brandon Montour – before the deadline.

They responded by losing nine of their next 10 games.

Last season, however, the Sabres had started imploding before adding Montour. This year, a strong February – they’ve compiled a 7-3-1 record – has helped them surge.

“The last few weeks overall we’ve been pretty close to the game we want to play, but it really was a test for us mentally coming back from Pittsburgh last night with that win, not letting our guards down and this was a chess match at times,” Krueger said. “You could feel the experience of Winnipeg also and how lethal they are.”

The Sabres’ most experienced player, Okposo, buoyed them against the Jets, scoring 9:58 into the game.

After Jets captain Blake Wheeler tied it later in the first period, Okposo put the Sabres up again, wiring a shot over goalie Connor Hellebuyck’s left shoulder from the bottom of the left circle.

Okposo has battled concussions and other injuries over the past few years. At times, it looked like his best days could be behind him.

But the American has enjoyed a terrific bounce-back season, transitioning nicely into a checking role beside Girgensons and center Johan Larsson.

“I’ve definitely had some ups and downs in my career, but I just want to to keep pushing forward,” Okposo said. “I feel like I’m playing pretty good hockey.”

He added: “I feel good. It’s been fun playing with those two guys most of the year. They do a lot of the work and we’ve seem to found some offensive chemistry as of late. Just you can’t give enough credit to those guys. They make it easy to play.”