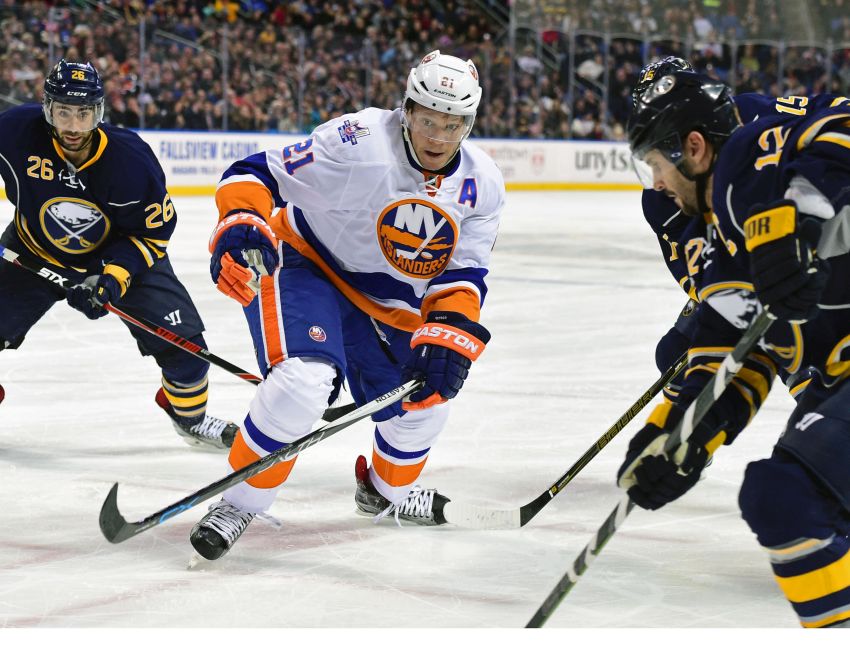 BUFFALO – The conversation lasted maybe 15 minutes. General manager Tim Murray wanted to gauge Kyle Okposo’s interest, and the free agent wanted to hear what the Sabres could offer him.

When Murray began telling him how underrated the city is, Okposo stopped him and said he knows all about Buffalo and likes it. The nine-year veteran wanted to learn more about the organization.

So after Murray talked about the Sabres and the bright future he envisions, Okposo hung up the phone happy. The winger immediately told his agent he was excited about the prospect of joining the team.

“I just really liked what I was hearing,” Okposo said on a conference call Friday night after signing a seven-year, $42 million contract. “I liked everything they had to say, they were asking me questions. (I) just thought it was a really good phone call.”

When superstar Steven Stamkos, who met with the Sabres on Sunday, re-signed with the Tampa Bay Lightning on Wednesday, Okposo, 28, jumped to the top of Murray’s wish list.

About 20 minutes after the market opened Friday afternoon, the Sabres inked Okposo, who had spent his entire career with the New York Islanders, to one of the richest contracts in franchise history.

So what ultimately sold Okposo?

“The chance to win a Stanley Cup,” he said.

“Those guys are going to continue to get better, especially Jack,” Okposo said. “He’s got superstar status, and you definitely need that to win a Stanley Cup.”

“It means a lot,” Murray said. “It means, what I have felt since I’ve got here, that we can be a destination for good players. I think this shows that we are. He’s a hell of a player. He’s a goal scorer, he’s got a power forward’s body (6-foot, 201 pounds). He’s put up very good numbers.”

The Minnesota native has 67 goals and 184 points in 210 games (.80 points a game) over the last three seasons, the 26th-highest point total in that span, according to hockey-reference.com. That’s four more points than O’Reilly recorded in that stretch in 23 fewer games.

Those numbers might increase beside Eichel or O’Reilly and some top wingers. That young talent also convinced Okposo, who went through a rebuilding process in New York, the Sabres are closer to the Cup than the Isles, a team fresh off a 100-point season and a first-round playoff win.

After Okposo’s final appearance against the Sabres last season, he said he thought to himself, “Gosh, you guys are a really skilled bunch … and have a lot of upside.”

Okposo did some other homework. He spoke to Sabres winger Matt Moulson, his “extremely close” friend and former Isles teammate, and Drew Stafford and Thomas Vanek, two former Sabres from Minnesota. All of them talked highly of Buffalo.

Murray couldn’t sign every player he wanted. After the Sabres lost goalie Chad Johnson, he said another backup verbally agreed to an $850,000 contract before reneging on it. The Sabres had even placed the goalie on their depth chart.

Still, Murray was clearly upset. That had never happened to him before. He said the goalie took a $900,000 deal. Based on the contracts awarded, Jeff Zatkoff, who signed for that money with the Los Angeles Kings, was possibly the player.

“Sounds like he just said yes to both teams,” Murray said.

Murray said he called the other GM, who had a similar story. He then stopped talking so he wouldn’t get in trouble.

“I wouldn’t say anything very nice, I guess,” he said.

At this point, he’s open to anything to find a new goalie to play behind Robin Lehner – a signing, trade or even getting an AHL guy and letting Linus Ullmark, a youngster ticketed for the Rochester Americans, start the season in Buffalo.

The Sabres have also made two depth signings for the AHL.

What else does Murray want?

“We have a few more signings for Rochester, for sure, or depth guys,” he said. “I don’t want to call them depth guys.”

The Sabres have his rights until Aug. 15.

“I think if we can get in front of somebody … only good things could come of it,” Murray said.