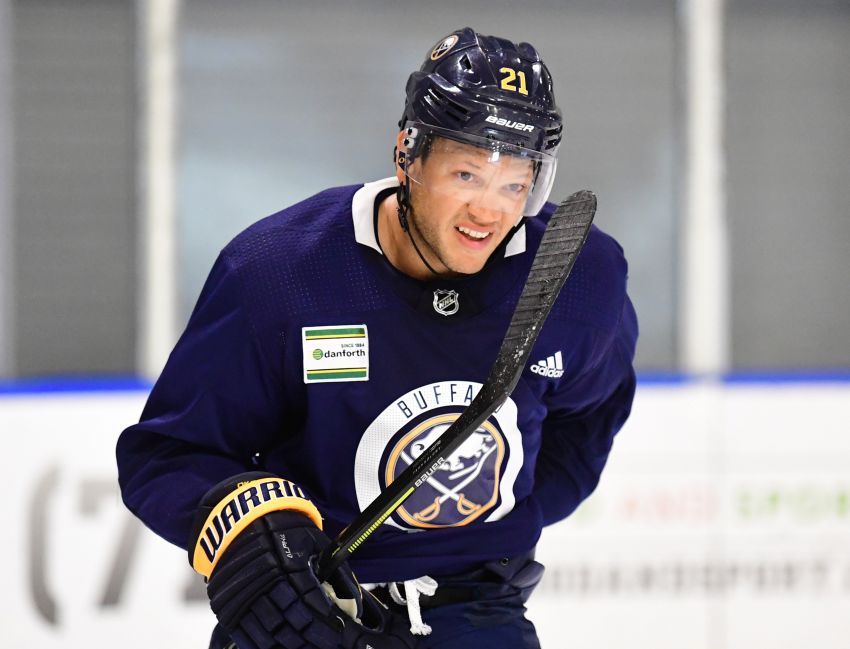 “I think there’s a different attitude around here,” said Okposo, whose Sabres open training camp and a new season this morning when veterans report for their physicals.

The change started weeks ago, when rookies began preparing for the Prospects Challenge tournament. By the time Okposo and other established players arrived in Buffalo last month, the youngsters had been skating for weeks.

So when veterans joined the sessions, Okposo said the “young kids set the tone.”

“Their work ethic was contagious, something that you have to have every day to be a good team,” he said Wednesday inside HarborCenter. “I talk about it again and again and again.”

The Sabres, of course, were downright awful last season, finishing 31st overall, dead last. A myriad of problems – a consistent work ethic was just one – contributed to the worst season in franchise history.

Basically, everything must change if the Sabres want to shed their also-ran status. So far, everyone – general manager Jason Botterill has brought in about seven new faces and drafted defenseman Rasmus Dahlin first overall – seems to have grasped that.

“There’s just a different attitude with guys just holding each other a little more accountable (during skates), in the gym, in the room,” he said. “It’s something that we want to do more of. We’re going to have to grow together as a group of people to come closer as a team, and I think that began a few weeks ago and over the summer.

“Everybody knew that we had to change, and it seems that some of that is being implemented. The big test for us is going to be when camp opens. … When things get a little bit hectic, how strong is that glue going to be?”

A lack of accountability dogged the Sabres throughout their 62-point season. Early on, former winger Jordan Nolan, who won two Stanley Cups with Los Angeles, called out his teammates for not getting on each other.

A year ago, Okposo did not need any teammates to tell him he was struggling. He often acknowledged the obvious.

The scary concussion Okposo suffered at the end of the 2016-17 season – he was briefly hospitalized in intensive care – cut short his training during the summer of 2017. Not surprisingly, he stumbled out of the gate, recording just one assist in his first nine outings.

Okposo rediscovered his scoring prowess during the winter, and he finished with 15 goals and 44 points in 76 contests. Still, his ghastly minus-34 rating ranked last among NHL forwards.

“You just have to take a really honest look at yourself and be able to say, ‘What did I do well? What didn’t I do well?’” he said. “It’s something I find that I’m pretty good at, is being objective. I just looked at my game and said, ‘These are the areas I need to fix in order to get back to where I want to be in order to get better.’”

Okposo said he worked with a skating coach from early May until last week. Instead of scrimmaging or playing in summer league games, he said he focused on his skating and skills so he has a strong base to fall back on during the season.

“Your timing, the stuff in the games, that’s going to come back through training camp, through playing games in the preseason,” he said. “I wanted to make sure everything else was really solid.”

The Sabres have a solid group of prospects on their 51-man training camp roster. Some of them will will likely push veterans for jobs in the coming weeks.

Reinhart, who has been in town skating with his teammates, wasn’t on the ice Wednesday. Not every Sabre, however, participated in the workouts inside HarborCenter.

Reinhart, 22, is listed on the team’s training camp roster.