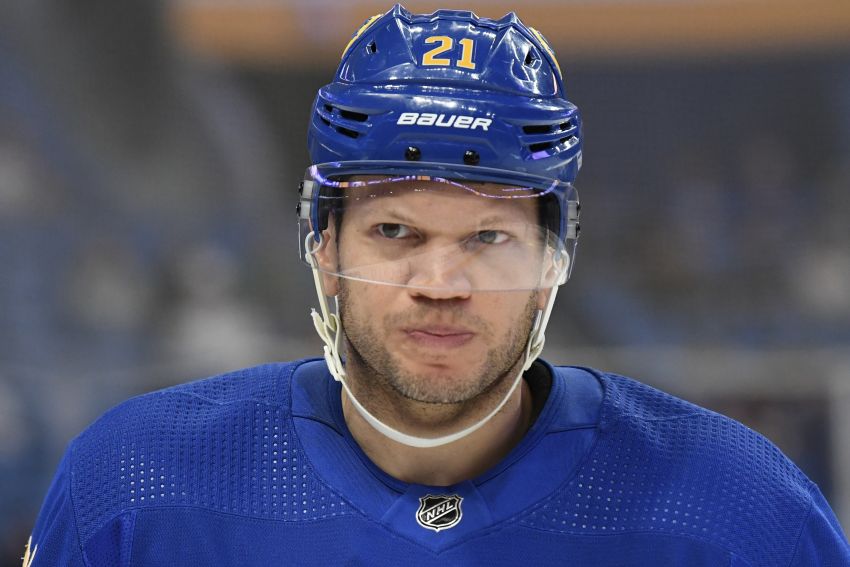 BUFFALO – Sabres center Tage Thompson had time and space, so he leaned into his shot, and when the puck hit teammate Kyle Okposo inside his right knee, he went down in a hurry.

As Okposo hobbled off the ice in pain late in Saturday’s first period, it felt like his night might’ve been finished. At that point, the Sabres trailed the Philadelphia Flyers 2-0, and Okposo, who turned 34 on Saturday, said he was “steaming on the inside.”

“I was pretty pent up,” Okposo said after scoring the first of four second-period goals to help the Sabres roar back and win 4-3. “And if I didn’t take that shot, I might’ve lost my marbles a little bit after the first.”

Instead, Okposo, who hit the 20-goal mark, was making sure nothing had been broken. He said he took some Advil and Tylenol to manage the pain and skated out for the second period at KeyBank Center.

“Once I figured I could skate on it, then the adrenaline just kind of kicks in,” said Okposo, whose knee was wrapped following the game. “It’s going to be pretty sore tomorrow, but glad I got through it.”

Okposo’s return helped the Sabres overcome their wretched start before the crowd of 11,046 fans – they trailed by two goals just 3:55 into the game – and earn their second victory in the last six contests.

His goal power-play goal 3:17 into the second buoyed the Sabres, who outshot the Flyers 18-4 during the period.

“He has an immense presence in everything we do,” Sabres coach Don Granato said of Okposo. “You saw tonight, he takes that shot block, he finishes his shift, he’s a pro and he comes back out there because he cares about his team and scores a goal, and that’s Okie.”

“Huge, huge game for him and we’re super happy for him,” Dahlin said. “He’s a role model for us and he’s a great leader.”

Okposo, who endured a string of scary concussions early in his Sabres career, hit the 20-goal mark for the first time since 2015-16, his last season with the New York Islanders. He’s the Sabres’ oldest 20-goal scorer since Dave Andreychuk in 2000-01.

“It’s a nice number, for sure,” Okposo said. “It’s … been a fun year to watch this group grow and to have feel like I had a hand in it and to feel like I’m a part of it. And it’s been just a ton of fun playing with these guys.”

The Sabres never let up after Okposo’s goal.

After Travis Konecny put the Flyers back up at 14:06, the Sabres responded right away, getting the tying goal from winger Vinnie Hinostroza at 15:36 and the go-ahead power-play score from Thompson, his team-leading 34th, at 17:58.

“In the second period, we came out and we willed it to go our way,” Okposo said. “We just were on our toes and playing well in the offensive zone, handing off good shifts. We did the right things.”

It was a far cry from the opening minutes of a chippy first period, when the Sabres looked awful as Joel Farabee and Owen Tippett scored.

Granato said he told the Sabres their “emotional cannot go toward that other team.”

“Your physical, competitive energy’s fine, but you do not need emotional energy,” Granato said. “And I thought they were really, really good.”

Granato said he knew Power, the first overall pick in 2021, could handle a demanding role early. He believes the support his teammates have given the rookie has boosted him.

“We’re at a point in our season where the guys have formed together as a team and they support each other really well,” Granato said. “To insert a talented player such as Owen, there’s a lot of support around Owen that puts me at ease to put him in all these situations.”

“But I do know from watching him, it was easy to assess his ability … but his intelligence was the real thing that he will learn really fast from any mistakes. So we need to just keep getting him in situations.”

Notes: The Sabres play this afternoon in Philadelphia. … Sabres defenseman Mattias Samuelsson returned from a one game-absence (lower body). To make room, Will Butcher was scratched. … Sabres goalie Craig Anderson made 18 saves. Goalie Dustin Tokarski is expected to start today. … The Sabres killed three third-period penalties to eke out the win. … Okposo has scored 20 goals four times. …. Sabres winger Victor Olofsson’s assist was his 42nd point, tying his career high. … Dahlin also added an assist and has 48 points. If he hits 50 points, he would become the first Sabres defenseman to reach the mark since Garry Galley had 54 in 1995-96. … Bills quarterback Josh Allen received a rousing ovation when he was shown on the video boards watching the game in a suite.