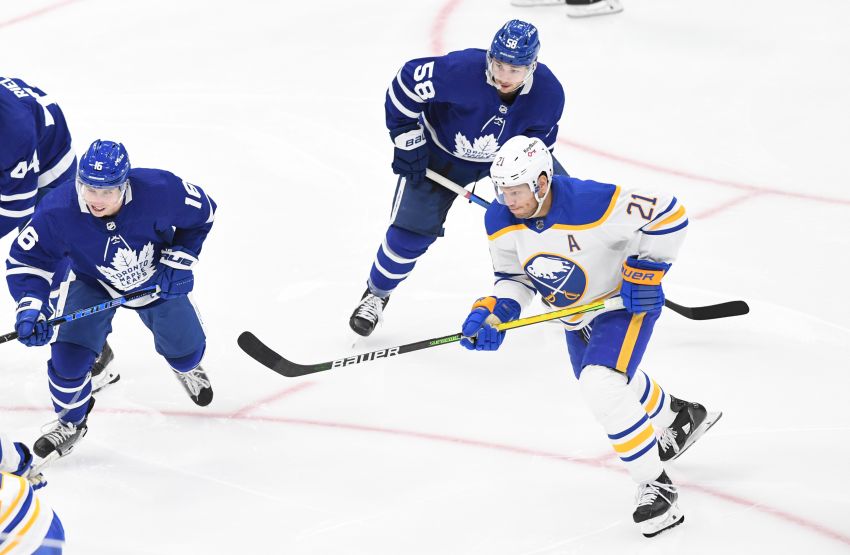 BUFFALO – On Wednesday, the Sabres, a team two days away from finishing its season, had a group of players on the KeyBank Center ice 25 minutes before their final practice started.

To veteran winger Kyle Okposo, 34, the Sabres’ oldest and most experienced player, that speaks volumes about the group’s passion. The Sabres will miss the playoffs for a record-setting 11th straight year, yet no one seems to want the season to end.

“That’s not normal for this time of year but it’s the norm around here,” Okposo said of players coming out early for an April practice. “And that’s all that matters, is what we do as a group and how we act.

“I think that the other guys would definitely like this to extend another month or two, but it wasn’t meant to be. So we’re going to enjoy the last few days.”

Okposo has enjoyed his sixth season in Buffalo like no other. He said he recently told his wife, Danielle, that he has never had so much fun playing here.

After signing a seven-year, $42 million contract in 2016, Okposo often battled injuries, including a string of scary concussions that threatened to derail his career. The Sabres, meanwhile, morphed into the NHL’s laughingstock, never sniffing the playoffs.

But Okposo has put together a terrific comeback season – his 21 goals rank third on the team – while the Sabres have consistently showcased growth not seen in these parts for more than a decade. They’ve compiled a 15-8-3 record since March 1 entering tonight’s road game against the Boston Bruins.

Following a stunning run of futility, the Sabres finally seem to be getting things right under general manager Kevyn Adams and coach Don Granato.

Okposo, the team’s nominee for the Masterton Trophy, has been at the forefront of the Sabres’ revival – both on and off the ice. The Masterton is awarded to the player “who best exemplifies the qualities of perseverance, sportsmanship, and dedication to hockey,” according to the NHL.

“What he does on the ice, obviously, his work ethic, everything is unbelievable,” said Sabres rookie Peyton Krebs, who sits next to Okposo in the dressing room. “What he does off the ice, it’s something to aspire to. He’s a great leader for me, I really look up to him.”

The culture has clearly changed this season, and Okposo’s influence has been a major factor in the team growing closer and developing better habits.

Okposo, an alternate captain with winger Zemgus Girgensons, has fun from the moment he arrives at the rink each day.

“Eat breakfast with whoever’s in there and then you’re just laughing with the guys,” said Okposo, who will likely miss tonight’s game because of a lower-body injury. “You have your routine that you do every day, and you go talk to the trainers and have a coffee and it’s just fun. It’s a lot of fun to be around this group. We’ll sit in after the meeting and talk about whatever. That’s what makes it fun, is those interactions.

“And then when we get out on the ice, which is what you guys see, we compete, we battle, but we have a ton of fun out there, too.”

On the ice, Okposo has compiled his first 20-goal season since 2015-16, his last year with the New York Islanders. The genesis of his revival began more than a year ago, when after an injury-plagued start, he found a groove before suffering a broken cheekbone.

“I was in a really good spot mentally,” Okposo said.

Okposo said he tried “to mentally reset and keep that momentum going and stay in that right frame of mind” last summer. He stayed off the ice for two months, his longest break in a non-COVID year, and did more work in the gym to prepare his body for the grind of an 82-game season.

“I mentally came into this year in a really good place and just said that I was going to take care of business for myself and take care of myself before I did anything else,” Okposo said. “That mentality really paid off throughout the year.”

“Even when he was challenged and not playing well … he just had persevering qualities, just no quit,” Granato said. “When guys are faced with adversity, decisions they make, as a coach, you see that and you’re hypersensitive to that, ‘Is he hanging his shoulders, is he pouting, is he mystified?’ And then there’s the other breed that’s just actively trying to figure (it) out.

“He’s on the ice earlier, staying out later, grabbing one of the skill coaches and saying, ‘Can I work with this?’ Asking for more video. So they’re proactive in the adversity they’re facing or the challenge they’re facing. They’re not happy with their results but they’re actively seeking ways to fix it rather than dwelling on it or finding excuses. And so for Kyle, his determination is infectious, and there’s so many attributes you love about the guy.”