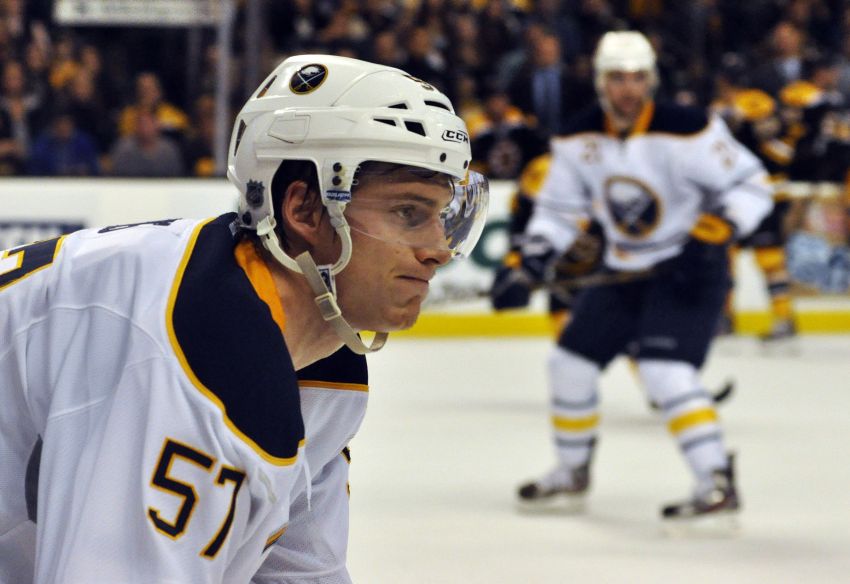 If you believe the general manager, then he’s in the mix and will be active on the Consol Energy Center floor this weekend during the NHL Entry Draft, which starts tonight when the Sabres pick twice – 12th and 21st, compliments of the Paul Gaustad trade with Nashville – in the first round.

The Sabres are reportedly interested in Anaheim sniper Bobby Ryan, who’s said to be back on the market, and Pittsburgh’s Jordan Staal. Columbus star Rick Nash is still dangling out there, too. Surely, a few surprise names will also materialize.

A year ago, the Sabres’ acquisition of defenseman Robyn Regehr at the draft reverberated around the NHL.

They convinced the respected veteran to waive his no-trade clause after he had initially said no. Owner Terry Pegula and coach Lindy Ruff bolted the draft to visit Regehr in Saskatchewan. The Sabres also ate Ales Kotalik’s $3 million salary just to get Regher.

The trade helped changed the Sabres’ reputation around the league and was another signal the new ownership regime meant business.

What can Regier and company do for an encore? If he wants to deal for frontline talent, he has assets.

Besides owning two first-round selections for the first time since 2008, when they chose young stars Tyler Myers and Tyler Ennis, the Sabres also pick 42nd and 44th (from the Regehr trade), the first time they’ve had even one second-rounder since 2008.

There are also strong prospects in the minors and junior.

And, of course, the Sabres possess a core of established roster players. Following their third postseason DNQ in five seasons, should anyone be off limits?

But the Sabres might be better off keeping their picks, especially the four high ones.

Drafting and grooming their own talent has been the Sabres’ forte and the organization’s lifeblood for years. Regier’s wheeling and dealing with Pegula’s money last year, a complete 180 from his style under thrifty owner Tom Golisano, yielded a ninth-place finish for a team that had made the playoffs two straight years.

Regehr, while pretty good, was still a minus-12 for $4 million. Defenseman Christian Ehrhoff, whose rights were acquired prior to free agency, never had a $10 million impact. Center/winger Ville Leino was a 25-point mega bust for $6 million in free agency. Forward Brad Boyes, the first name acquired, made $4 million last season, exactly $500,000 a goal. The Sabres gave St. Louis a second-round pick for 14 tallies over 83 games.

Even with zero playoff success recently, the Sabres are one of the best clubs at evaluating and choosing young talent. Twenty homegrown draft picks, including their five top scorers, and two college free agents played for the club last year.

These days, the Sabres host their own combine for prospects. Without it, the Sabres wouldn’t have selected defenseman Alex Lepkowski or forward Brad Navin last year, Devine said.

Since most drafts don’t start paying dividends for a few years, here’s a look at the first-round picks from 2005-09 and some notable hits and misses.

Kassian, a lethal hitter with soft hands in junior, lost much of his aggressiveness during 2011-12, his first professional season. The Sabres traded him to Vancouver for center Cody Hodgson in February after 27 games. Ruff acknowledged later he was concerned about Kassian’s physicality.

Foligno quickly became one of the NHL’s top forces following his March recall, scoring six goals and 13 points in 13 games. The rookie could become a star next season. He’s an early Calder Trophy candidate.

Myers burst on the scene as a 19-year-old in 2009-10, earning the Calder and accolades as one of the NHL’s top defenders. Despite some recent struggles, some believe he’ll win a Norris Trophy someday.

Ennis, a 20-goal rookie two years ago, went on a scoring spree when Ruff switched him from wing to center in the winter. He might crack 80 or 90 points someday.

Schiestel hurt his knee again on opening night last season, and in March the Sabres loaned him to the Dallas organization, completing a stunning fall down the depth chart.

With Andrej Sekera hurting, the Sabres summoned Persson from the AHL. But Sekera played, so Persson sat. The Swede developed a bit under Kevin Dineen in Portland, and then did little last season under a new coaching staff in Rochester. He recently signed to play overseas.

The Sabres took backup goalie Jhonas Enroth, who was named to the NHL’s All-Rookie Team on Wednesday, and defenseman Mike Weber, a regular the last two seasons, with their second and third picks.

The Sabres whiffed badly with Zagrapan, who, like Persson, never cracked the NHL before heading to Europe. He managed AHL seasons of 17, 18 and 21 goals. But the Slovakian’s assertiveness and consistency never matched his skill set.

The diminutive Gerbe has been a regular for two seasons, developing into a strong two-way player. Despite only six goals in 2011-12, he could still score 20 or more someday.

Gogulla played one AHL season before going home to Germany.