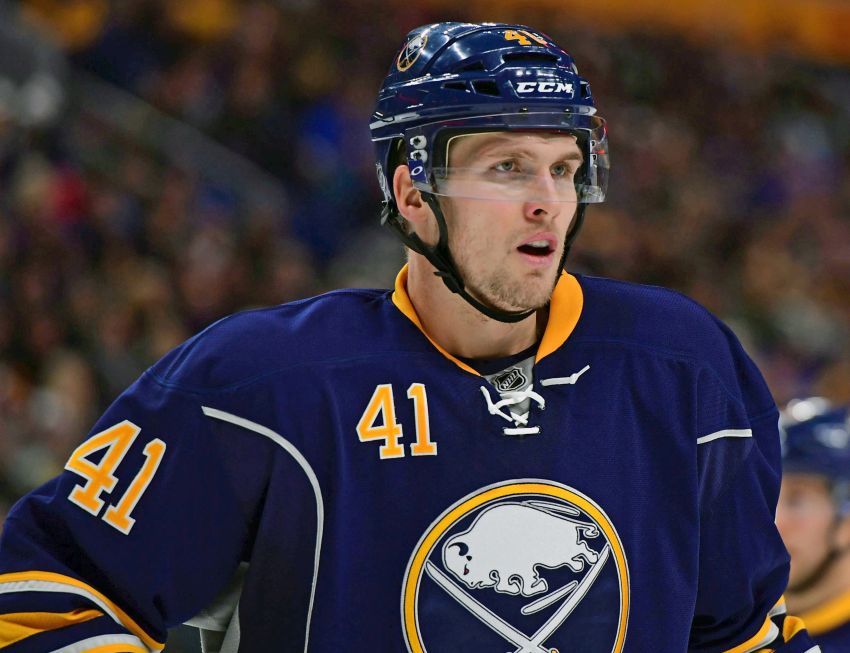 BUFFALO – On Wednesday, after almost three months of commuting back and forth to Rochester, Sabres defenseman Justin Falk moved his family into an extended-stay hotel here.

For Falk, who has shuttled between the NHL and minors for years, having his wife and two children close by, of course, offers some comfort.

“That helps … just to have a little sense of feeling at home,” said Falk, who said he sometimes made the 75-mile drive three times in a day.

Nine years into his pro career, Falk hasn’t found an NHL home yet. Counting two stints with the Minnesota Wild, the Sabres are his fifth organization in five seasons.

But Falk, 28, might have a future with the Sabres, who host the Ottawa Senators tonight at KeyBank Center. The veteran has fit in nicely, providing critical depth while becoming arguably their biggest surprise.

“When you get a chance to play at this level, where you’re not guaranteed it everyday, it really makes you put things in perspective and stay in the moment and prepare and be mentally ready to play each game,” Falk said Thursday. “I think that’s a good thing for guys like that in that situation of where they’re not only desperate for the season but they’re desperate to play for their careers.”

The Sabres assigned the 6-foot-5, 222-pound Falk to the AHL when rookie Casey Nelson beat him out for the seventh defense spot out of training camp.

His stint with the Rochester Americans lasted only 10 games.

With injuries ravaging the Sabres’ blue line for months, Falk, who was recalled in early November, has become a regular, playing 34 games.

“My style of defenseman is if you’re being unnoticed, then maybe that’s a good thing,” said Falk, who has three assists and averages 13 minutes, 10 seconds of ice time an outing.

Bylsma had no update on Bogosian following the game. The Sabres were off Friday.

Given defense depth is critical, especially at this time of year, if the Sabres assigned Falk to the Amerks, he could get claimed on waivers.

Falk is used to moving around. He has never played more than 47 NHL games in a season. Last year, after some regular duty with the Columbus Blue Jackets, he went back to the AHL in early February. He won a Calder Cup with the Lake Erie Monsters in June.

“By no means has my career been easy,” Falk said. “I’ve been a player and a person that’s had to work for something in his career and not always had the easy road and bounced around quite a bit with different teams, never giving up on the dream to play in the NHL.”

Falk, who signed a one-year, two-way contract July 1, won’t complain about that dream. Yes, constantly driving down the New York State Thruway can be a grind. But to him, it comes with the territory.

“It’s crazy, because you see little kids around the rink, and I was that little kid who wanted to play in the NHL,” Falk said. “If I’m going to complain about something like that, a bit of a drive, a bit of a situation, then that’s not right.

“I’m fortunate and happy to be here, glad to be here. By no means do I take things for granted. I play each day, each game, to leave it all out there to try to survive another day.”