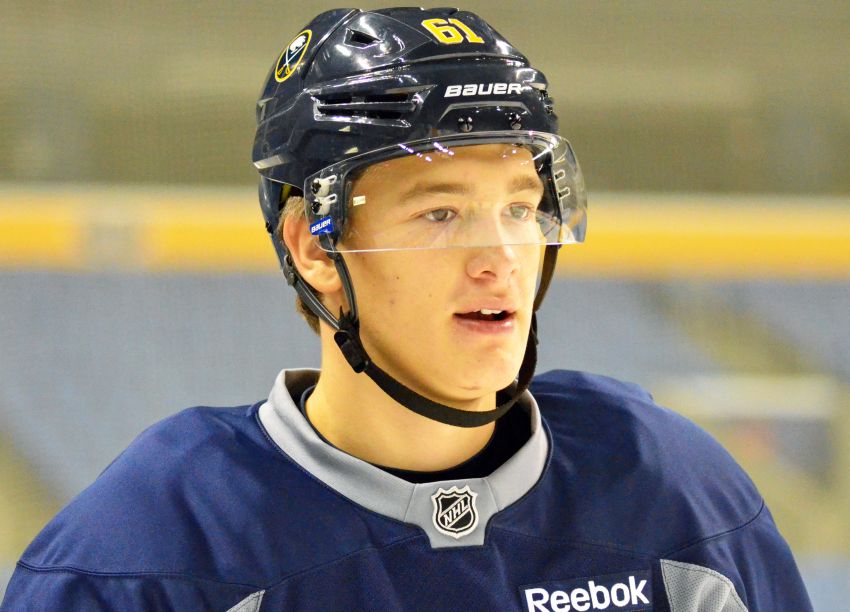 The team always intended to lock up Zadorov, the 16th overall pick in June, as quickly as possible. It’s only a coincidence the sides reached a deal in the midst of an impressive training camp from the Russian.

“I think if you can deal with it in his first year and get it out of the way, then they can focus on playing the game,” Regier said during the first intermission of the Sabres’ 3-0 win over the Columbus Blue Jackets inside the First Niagara Center.

“He would be going back to London, arguably one of the top junior teams in the Canadian Hockey League,” Regier said. “They host the Memorial Cup next year, so that means (with an automatic bid) he’s playing deep into the spring.”

“But he’s performed well here, too, so we’ll that conversation over the next few days,” he said.

The Sabres could keep Zadorov for a nine-game trial before the first year of his contract kicks in.

Regier said the tougher decision is the team’s roster size.

“You can only carry 23 players,” he said. “So there’s some hard decisions to make.”

Zadorov, a hulking 6-foot-5 and 220 pounds, has a goal and a plus-4 rating in three preseason appearances.

Zadorov added: “I think for sure I surprised (the Sabres) because I went in the draft a little bit later. … Not a lot of players this big try to make the team in the first year.”

The youngster has well-earned reputation for thumping opponents – “I really like to hit,” he said at the draft – but his offensive game is developing quickly. He scored a nifty goal Sunday in Toronto after moving up in the play.

“I try to play more (offensively) because I never played that before,” said Zadorov, who came to North American last season. “Just last year when I came to Canada (the) coaches show me how to play offensive game, how to score goals and shoot the puck. I just like it.”

“He’s in the main dressing room with the guys now,” Regier said. “I think it’s good for him to see how the professionals conduct good business. He’s a sponge. He’s a pretty quick learner.”

Zadorov had six goals, 25 points, 54 penalty minutes and plus-33 rating in 63 games last season with the Knights.

Ville Leino, Mikhail Grigorenko and Zemgus Girgensons (empty net) scored before an announced crowd of 17,346 fans as the Sabres improved to 4-1-1 in the exhibition season. Goalie Jhonas Enroth had a 26-save shutout.

A hand injury forced winger Joel Armia from the game late in the second period. Sabres coach Ron Rolston said the rookie had to be examined and the Sabres would have a better read on the injury today.

In other injury news, Rolston said Marcus Foligno (upper body strain) should be ready for next week’s season opener. The winger could return for Friday’s exhibition finale.

Rochester signed winger Colton Gillies to an AHL contract on Wednesday. The 24-year-old, the 16th overall pick by Minnesota in 2007, was in Buffalo’s camp on a tryout until Saturday.

Gillies, a veteran of 154 NHL games, spent all last season with Columbus. Like a lot of other experienced players, he endured an uncertain summer with the salary cap coming down.

“There was a lot of high-end guys that were still there,” Gillies said Saturday. “It did comfort me to know they’re still there. That’s just the way it was.”

Rolston reunited Sabres defensemen Tyler Myers and Henrik Tallinder, who formed a dynamic duo all of Myers’ dynamic rookie season in 2009-10, on Wednesday.