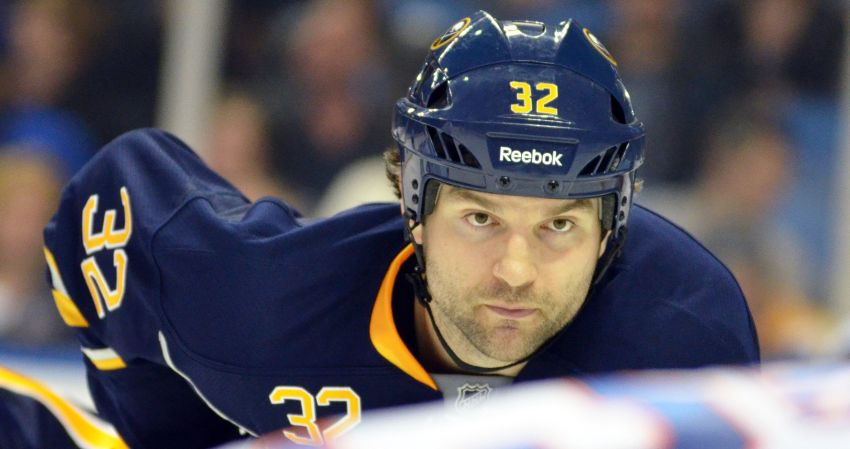 BUFFALO – Late this season, as John Scott began earning a regular shift beside some proven talent, the tough guy promised he would score his long-awaited second NHL goal.

That elusive tally, Scott said Monday, will come next season.

“Oh, definitely, I’m going to get it,” Scott told the Times Herald by phone after the Sabres re-signed him to a one-year, $750,000 contract. “I was just saving it. It wasn’t needed this year.”

But the Sabres, a club pushed around too often in the past, sorely needed Scott’s intimidation and toughness. Scott, meanwhile, loved joining a team willing to play him more frequently.

“I think it was a team that had a need and I just kind of filled it,” Scott said. “It was one of those situations where it worked out well for both parties. I wanted to find a chance where I would get a chance to play a little bit and they needed some toughness.”

The 30-year-old, the Sabres’ first designated fighter in years, impressed while playing 34 of the 48 games, quickly becoming a local folk hero because of his hulking stature (6-foot-8 and 270 pounds) and fun personality.

“I think I did well. I protected my team,” said Scott, who had zero points and 69 penalty minutes. “I think the stuff that happened last year, the year before I was there, didn’t happen this year. Hopefully, going forward none of that stuff happens again. Yeah, I think I did an all right job.”

Scott, who bounced from Minnesota to Chicago to the New York Rangers in a two-year span, is hopeful he has finally found a home. The winger only played 35 games in 2011-12 during a full 82-game schedule.

“I love playing in Buffalo,” said Scott, who grew up in nearby St. Catharines, Ont. “I like the city. I like the fans. Hopefully, I can make it a permanent home.”

“I think I proved to the team and the organization that I can play … a fairly decent shift, get 10 minutes a game on some nights,” Scott said. “Hopefully, (I can) start producing a little bit offensively and not be a liability like everybody kind of thought I was when I first got here. It was a little welcome change to get a regular shift for the last 10, 12 games.”

Naturally, Scott’s excited to have his contract done early. He plans to leave his offseason home in Michigan for a few weeks this summer and work with a skills and skating coach in Buffalo.

Jhonas Enroth dazzled for the Sabres down the stretch, performing like a No. 1 star goalie. Following the season, the backup, who struggled for more than a year, said he was ready to become an NHL starter.

Enroth just proved it again, backstopping Sweden to a gold medal at the world championship.

The 24-year-old had a 1.15 goals-against average, a .956 save percentage and two shutouts in seven games as Sweden became the first host country to win since 1986.

Enroth was named the tournament’s top netminder. He stopped 26 shots Sunday in Sweden’s 5-1 win over Switzerland.