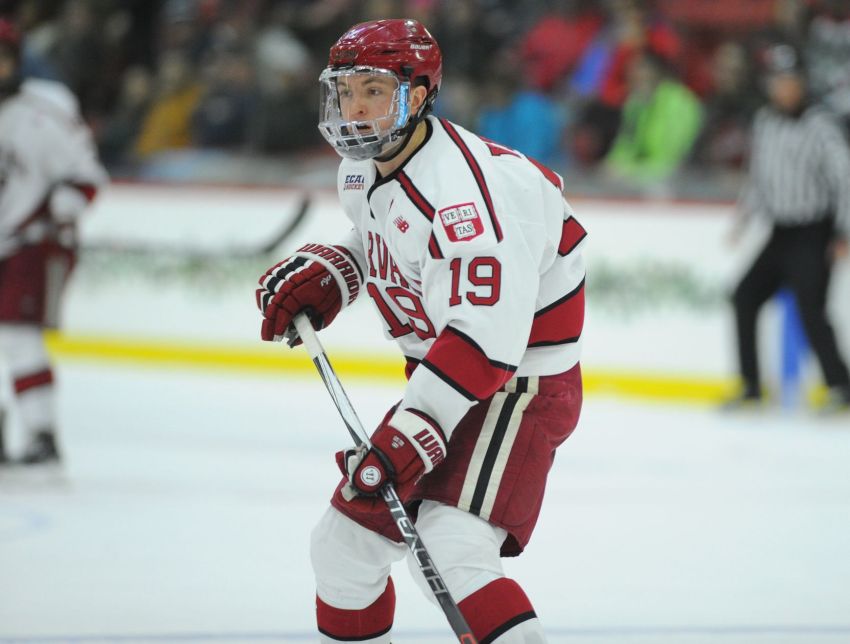 In an era now long gone, Vesey, whose rights the Sabres acquired June 20, would have simply been another strong prospect. Upon turning pro, the former Harvard University star would have reported to the minors and quietly started his career.

Vesey, the 66th overall pick in 2012, would have earned some notable attention when he cracked the NHL and started contributing.

Of course, Vesey, who will almost certainly become an unrestricted free agent Tuesday, is a fine young player. Still, the high-scoring winger is a product of modern times, of the public’s insatiable desire for any information on the next “big thing.”

Vesey entered the news in March, when he signaled he wanted to hit the open market, a rarity for a drafted NCAA player, by spurning the Nashville Predators.

Since then, the news cycle has rarely stopped. Word leaks out Vesey’s interested in a team or another one is off his list. His summer league goals are dissected.

On July 12, Sabres general manager Tim Murray, who traded a 2016 third-round pick for the youngster’s rights, seemed amazed Vesey had become what he called “top-end news.”

“I think I’ve paid less attention to this than anybody,” Murray said then.

Murray’s words and tone a month ago implied he knew Vesey likely wouldn’t pick the Sabres, who can offer him a spot beside Jack Eichel, his Foxborough teammate and a potential superstar, or Ryan O’Reilly, an NHL All-Star. The team’s brass had just traveled to Boston and spoken to Vesey, a meeting both sides said went well.

“Buffalo certainly explained their situation and how it would benefit Jimmy,” Peter Fish, one of Vesey’s agents, told The Boston Globe. “They obviously had a lot of attractive personnel and players Jimmy could play with. But again, Jimmy, in his mind, wanted to go to free agency and compare all the teams at the same time. That way, it’s not like there’s one team, then wait a while. It’s, ‘Here we all are, let’s get it all out, then see what’s the best fit.’”

Given Vesey’s cheap price tag – he must sign an entry-level contract – half of the NHL might be calling him Tuesday morning. Realistically, Vesey probably has his list whittled down to a few teams.

“I think there’s a lot of things out there that either aren’t true or people are just searching to say things,” Fish told Yahoo! Sports. “We’re still talking with Buffalo, who will be part of this process once free agency happens, if it happens, which I assume is going to happen. Jimmy wanted to go to free agency all along. He wanted to see it through, and so Buffalo has always been a team that has interested him, but he wants to compare with a few other teams once it happens.”

It’s believed Vesey wants to play on the East Coast and, naturally, wants to skate on the first or second line. He told The Globe his hometown Bruins are on the short list.

Vesey’s father, Jim, is a scout for the Toronto Maple Leafs. They also drafted his younger brother, Nolan, in 2014. In a New York Post article, Fish acknowledged the Rangers were an “interesting option.”

Surely, other teams are in the mix.

“We’re obviously looking forward to next week and sitting down face-to-face with teams,” Vesey told The Globe on Wednesday. “By doing that, we can get a little bit of a better feel of where they see me fitting in to their team.”