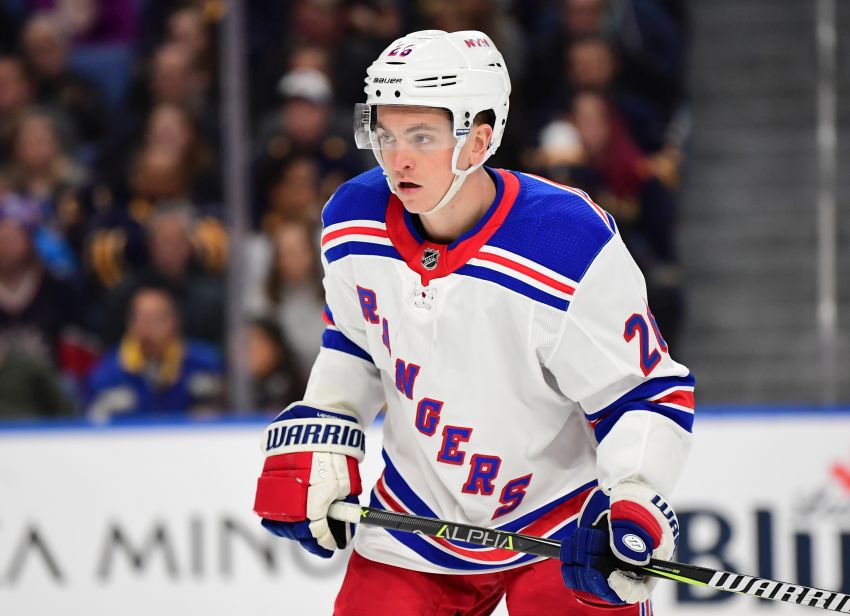 Botterill needed to add more scoring. The fact that Vesey once rejected the Sabres to become a free agent and join the New York Rangers wasn’t going to deter him from addressing a major need.

So on Monday morning, shortly before free agency opened, Botterill sent a third-round pick in 2021 to the Rangers for Vesey.

Besides, it was the Sabres’ old regime who dished a third-round selection to the Nashville Predators for Vesey’s rights in 2016.

“A lot has changed the last few years,” Botterill said on a conference call Monday. “We’re a different organization. We just looked at him as a player that fit a need for us right now. We felt that acquisition price was right.

“We felt he brought a different dynamic compared to some of our other wingers.”

The 6-foot-3, 199-pound Vesey, who was booed during his first NHL appearance in Buffalo, said he’s “pumped” to join the Sabres.

On a conference call Monday, Vesey said he had “nothing but positive things to say about the (Sabres) and the pitch they made to me” three years ago.

“But … I had definitely made up my mind that I was going to go to free agency,” said Vesey, who has one year and a $2.275 million salary cap hit left on his contract.

This time, however, Vesey has no choice.

“Part of my game and part of my style is a little bit of a blue-collar element,” Vesey said. “Something I think I’ve had part of my game my whole life is I get to the front of the net. That’s where the goals are scored mostly.

“When things are going bad, that’s something I fall back on, trying to get to the front of the net.”

Vesey said his game has evolved over the years. He pointed out the Rangers started utilizing him as a penalty killer.

“I like his size and his speed to get up and down the ice,” Botterill said. “He has more of a two-way game the last couple of years. …

“But I think the thing that really stands out for us is his ability to score even strength. … He’s had … the ability to get to the front of the net that we’re trying to improve on.”

Vesey said: “I’ve tried to work on my consistency, try to be more impactful on a nightly basis.”

Botterill said the Sabres pursued some forwards in free agency but couldn’t find a fit. After that, they focused on Vesey.

The Sabres, Botterill said, envision Vesey as “a top-nine forward,” meaning he could play on the top line beside captain Jack Eichel, his friend and training partner in Boston, or further down the lineup.

Rumors had been swirling for weeks the Sabres wanted Vesey. The Rangers, who inked forward Artemi Panarin to a seven-year, $81.5 million contract Monday, wanted to shed salary.

“Just hearing the rumors online, talking to my agent, I knew being traded was a possibility,” Vesey said. “I thought maybe at the draft, but when that didn’t happen, I was kind of waiting for this week.”

While Vesey might be a nice addition, Botterill must make more moves if the Sabres hope to end their eight-year playoff drought.

“I never would’ve guessed that we would’ve picked up a player like Jeff Skinner in the middle of summer last year,” Botterill said. “But I think it’s important that we stay and have dialogues throughout the league to see whenever that might materialize, whether it’s later on this week, a couple of weeks or start of September.”