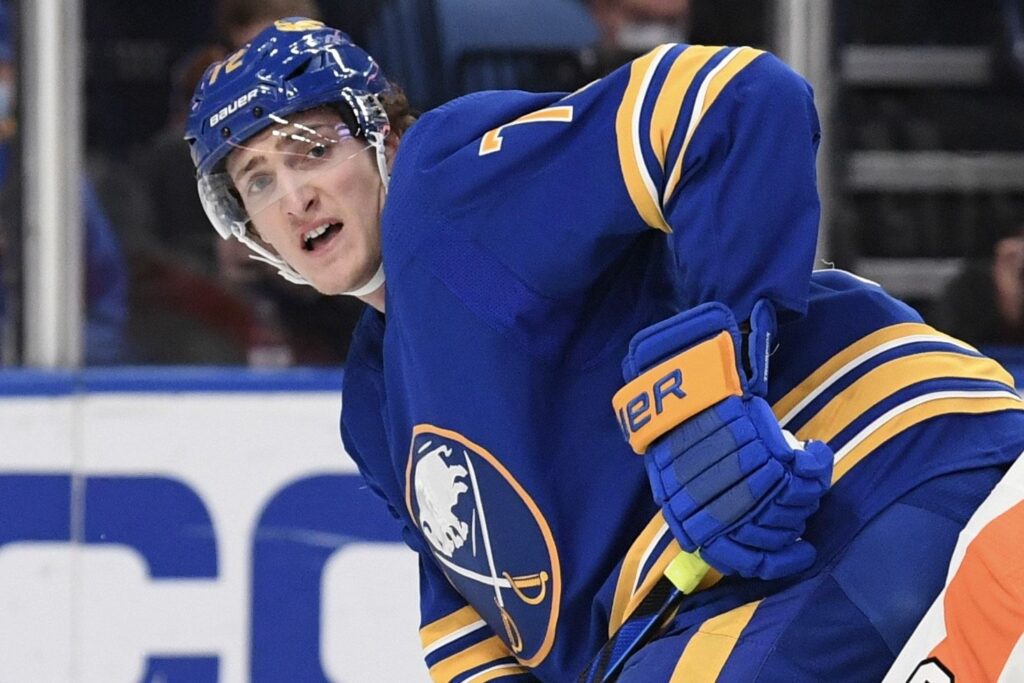 BUFFALO – The idea of Sabres forwards Jeff Skinner and Tage Thompson someday comprising two-thirds of one of the NHL’s hottest lines would’ve seemed ludicrous a year ago.

Twelve months ago, Skinner was about to become a healthy scratch as his career-worst season hit its nadir. Meanwhile, Thompson was moving in and out of the lineup and skating short minutes as a winger when he managed to play.

Skinner, a left winger, and Thompson, who moved to the middle late in training camp, developed strong chemistry as a duo earlier this season. Newcomer Alex Tuch joined them last month, becoming the final piece of the Sabres’ top line.

Tuch has been on a tear in his early days in Buffalo, registering six goals and 17 points in his first 15 outings. The Baldwinsville native assisted on three of Skinner’s goals Sunday.

In Skinner, Thompson and Tuch, the Sabres possess a combination that could just be scratching the surface of its potential. Coach Don Granato believes the trio is developing into a legitimate No. 1 line the Sabres will need moving forward.

“Thompson was a winger all the way up until the start of this year and … he’s come a long, long way,” Granato said on a Zoom call following Sunday’s game. “So I don’t want to go too, too far. So he’s evolving. I do think Tuch’s been in the league a long time. I’ve watched Tuch since he was a teenager. There’s a lot more, I believe, to his game than he’s experienced yet in the NHL. So those two guys, I look at them and I see potential in those two.

“Like today, just relentless on pucks, one guy after the other reloaded, just keep the pressure on them,” Thompson said Sunday after scoring a power-play goal. “With Tuch and me being so long, having good long reach, when we interchange like that it forces turnovers. And Skinny’s super strong on the puck and reads plays really well so he can kind of read off of us on the forecheck.”

Thompson converted what he called “an unbelievable” look by winger Peyton Krebs, tying Sunday’s game at 3 late in the second period.

Krebs, a recent addition to the top power-play unit, one-timed a pass to Thompson from the right circle after Skinner kept the puck in the zone.

Most players in Krebs’ position likely would’ve shot the puck.

“He’s a pass-first kind of guy so you’ve got to get yourself in spots to be open,” said Thompson, who scored in the left circle. “Even plays that you don’t think have a chance of getting to you are going to get to you.”

Granato said Krebs, a rookie, is “getting stronger and more acclimated to the NHL each day.”

“He has a feel for what his options are and he’s got some deception as well,” he said.

Granato said defenseman Mark Pysyk, a healthy scratch Sunday, handled sitting out well. Pysyk, a 10-year veteran, was the only Sabre to have played every game this season.

Pysyk sat out so defenseman Jacob Bryson could return after a one-game absence.

Granato said “there will probably be some sort of rotation” on defense.

Notes: Tuch hasn’t gone more than one game without recording a point since making his Sabres debut Dec. 29. … Tonight’s game was originally scheduled for Dec. 27 but was postponed because of COVID-19 problems. … The Sabres had Monday off.