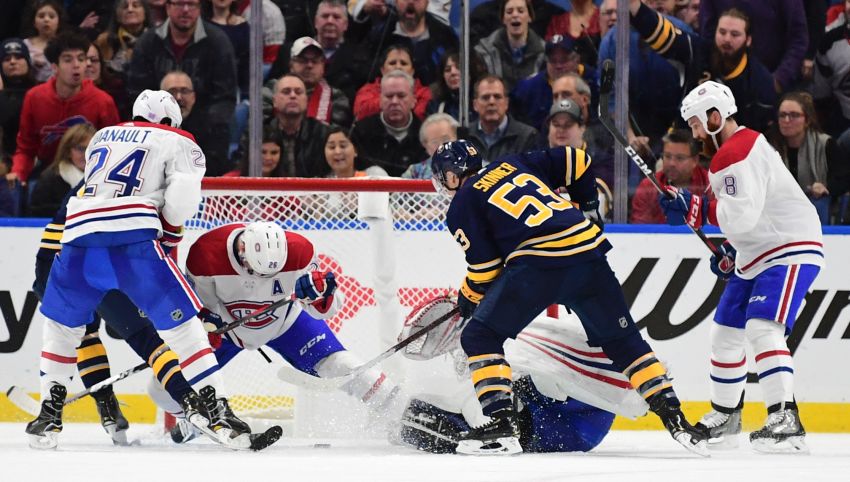 Skinner scored his second goal in Friday afternoon’s 3-2 overtime triumph by digging the puck out of the crease and burying it through traffic as he fell to the ice at 3:06.

“I didn’t see it go in,” said Skinner, who also tied the game against the Montreal Canadiens 17:34 into the third period.

But seconds before Skinner’s overtime score, his 17th goal in 23 games this season, he kept the Sabres’ power play alive three times by relentlessly hounding the puck deep in the Montreal zone.

“Any loose puck or retrieval he was going to get on it and (he) made some big saves,” Housley said. “The one time he dove to keep it in to keep position. That’s what Jeff Skinner does, he can track down pucks for us.”

Skinner also supplies a ton of the surging Sabres’ offense. Right now, he’s scoring at an eye-popping 61-goal pace over an 82-game season. He has scored 17 times in the last 19 contests.

“I can’t remember the last time I saw someone with that hot of a stick right now,” Sabres defenseman Zach Bogosian said.

Housley said: “What can you say about Jeff Skinner? He finds a way to score big goals for us.”

The Sabres, meanwhile, keep finding ways to win. Like six other times during their torrid eight-game run, they rallied from a third-period deficit to win.

“Guys don’t give up and you sort of have that belief that you can come back,” Skinner said.

Sabres goalie Carter Hutton said: “Whatever the score is, I think we keep to it.”

That’s why the Sabres are enjoying their longest streak since starting the 2006-07 season by winning 10 straight games. They never feel out of a game.

On Friday, Sabres rookie Casey Mittelstadt opened the scoring 12:39 into the tilt. Then they went quiet.

“In the first period, both teams were kind of feeling out each other,” Housley said.

Shortly after officials ruled he kicked the puck past Hutton, Brendan Gallagher scored from the right circle 18:12 into the second period. Then Andrew Shaw’s power-play goal 8:18 into the third period put Montreal up.

“In the second period, I just thought we didn’t manage the game very well,” Housley said. “We sort of fed their transition and we had to spend way too much energy in our own end. I give credit to the guys, they stayed the course, they stayed calm.”

Skinner backhanded the rebound past goalie Antti Niemi from the left circle to tie it, igniting the capacity crowd of 19,070 inside KeyBank Center.

What do all three Sabres goals have in common? The blue line helped create them.

While Rasmus Ristolainen did not register a point, he drew the penalty in overtime and was pumping the puck on Niemi.

“As many shots as we can get through and generate some offense from back there, I think that’s huge for us,” Bogosian said. “There’s a bunch of guys that can shoot the puck back there and see the game very well. I think as a group we’ve done a better job of that this year.”

Then with about 80 seconds left in regulation, Hutton made a game-saving stop, after the puck appeared to hit a camera hole deep in the Buffalo zone and bounced to Gallagher.

“I was screaming and I think my voice was cracking,” Hutton said. “I was yelling where the puck was. But I think everybody was drifting out of the zone, didn’t know it was there. Obviously, a weird play.”

With no one around to hector Gallagher, he zoomed in on goal.

“It was a huge save for us … but I don’t know what it hit,” Housley said. “I don’t know if it hit a camera hole, because we’re all looking, and all of a sudden, Gallagher’s got the puck behind us. It’s one-on-one and Carter makes a great save.”

The Sabres play a road tilt tonight against the Detroit Red Wings.