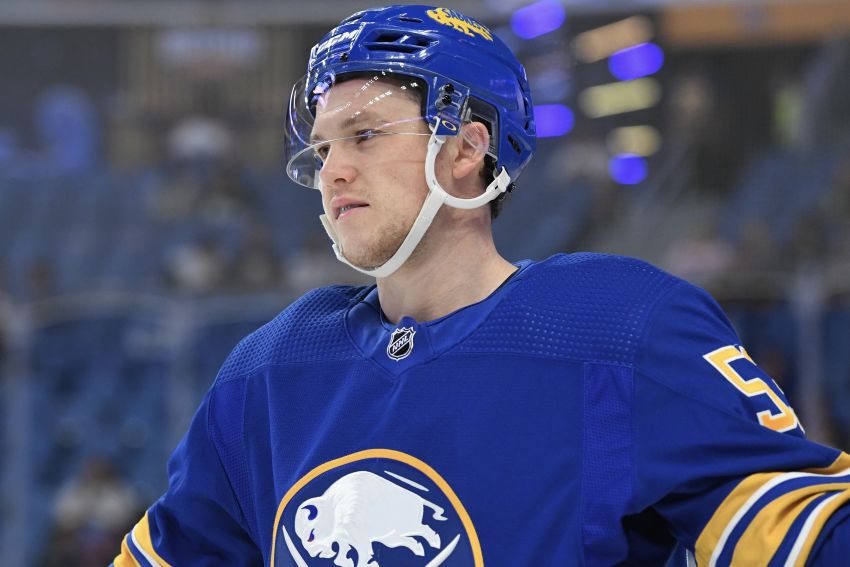 Considering the opponent, the scorching Nashville Predators, and the venue, the raucous Bridgestone Arena, Thursday’s 4-1 win might rank as the Buffalo Sabres’ most impressive victory this season.

Against a team that had won five straight games and 12 of its last 14 contests, the Sabres grabbed a second-period lead and never relinquished it, ending a six-game winless skid.

“Very pleased,” Sabres coach Don Granato said on a Zoom call. “I felt our guys deserved the win. They worked for it, they earned it from the first drop of the puck all the way to the end, all the way to Hinostroza’s goal. They battled and they stuck to a game plan, they had a real sense of objective and it was great to see.”

Skinner scored a power-play goal 18:18 into the second period, putting the Sabres up 2-1. His breakaway score 7:59 into the third period, his team-leading 13th goal, iced the Sabres’ fifth road victory this season.

Skinner said the Sabres protected the lead by staying aggressive.

“If you sort of let them dictate the play and take it to you, it can be tough to get out of your end and they can create opportunities,” Skinner said. “So I thought we did a good of sort of staying up, and once they did get it in behind us, we were able to transition out pretty consistently.”

Dell, who was recalled from the AHL on Tuesday, earned his first win in his eighth appearance for the Sabres, improving to 1-5-0 this season. After struggling in his first stint in Buffalo, Dell looked more engaged.

In the third period, Dell skated out his his crease and checked Eeli Tolvanen into the boards, earning an interference penalty.

“It was a funny penalty,” Granato said. “I love the aggression on his side.”

Sabres wingers Kyle Okposo and Alex Tuch, both of whom left protocol earlier this week, returned Thursday following a two-game absence. Neither had played since Jan. 1.

“Huge,” Granato said of getting the wingers back. “You add guys like Alex Tuch and Okposo, Hagg I thought was great at the back end as well coming back in. So … they stabilize the game but they make everybody else better and that was what you saw tonight.”

Shortly before Sabres defenseman Rasmus Dahlin, 21, played a game-high 25 minutes, 4 seconds against the Predators, he earned a spot on the Atlantic Division squad for the NHL All-Star Game on Feb. 5 in Las Vegas.

Granato said: “He has earned it and he deserves it. … He’s in that class and he’s just going to keep getting better. He was great again for us tonight. But there’s no question he’s All-Star caliber.”

Notes: The Sabres scratched defenseman Will Butcher and reassigned winger Brett Murray to the taxi squad prior to the game. … The Sabres have scored a power-play goal in five straight games. … Defenseman Mark Pysyk’s assist on Skinner’s first goal was his 100th NHL point.