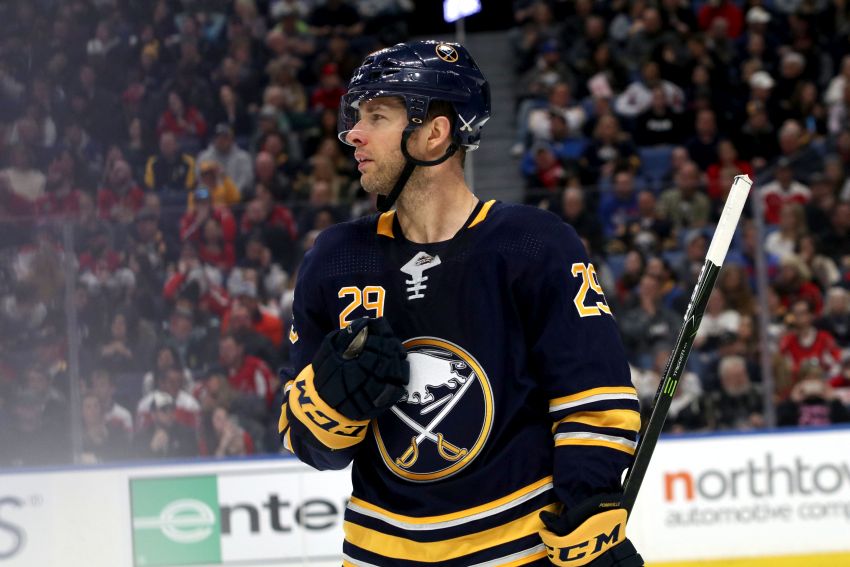 BUFFALO – Right now, it is business as usual for Jason Pominville. The popular winger is preparing for the upcoming season like he has a contract with the Sabres or another NHL team. Earlier this month, he and his family returned to Clarence from their summer home in Montreal.

Pominville, 36, said he feels he owes it to himself to stay ready in case an opportunity materializes he and his family can embrace.

“But that hasn’t happened yet,” Pominville said Tuesday morning following a late-summer skate inside HarborCenter.

Pominville’s five-year, $28 million contract expired after last season, leaving the 14-year veteran looking for work for the first time ever.

“Probably not the ideal time at 36,” said Pominville, who returned to the Sabres in 2017 after five seasons with the Minnesota Wild.

Then the affable Pominville, who still wears his Sabres gear, laughed.

“But it’s been good,” he said. “I’ve kept myself ready. I’ve skated, I’ve worked out, I’ve done all the normal stuff that I’ve always done.”

Given Pominville’s advanced age and reluctance to uproot his wife and two children, his career could be over, something he made peace with a long time ago.

On April 4, the morning of the Sabres’ home finale, he broke down discussing his future. That night, he scored his 217th goal with the Sabres, moving him past Don Luce into sole possession of 10th place on the team’s all-time list.

The crowd inside KeyBank Center responded by giving one of the greatest players in franchise history a rousing ovation. Pominville then saluted the fans.

As Pominville roared out of the gate and defied age last season, it seemed like he would be back in 2019-20. In his 1,000th NHL game Nov. 3, he registered two goals and three points, giving him eight goals and 14 points in the first 14 contests.

Still, the 16 goals Pominville compiled in 73 games ranked fourth on the team. Considering his added value as a veteran leader – he once captained the Sabres and has experienced winning in Buffalo – re-signing him makes sense.

While the Sabres possess plenty of forwards, they lack depth at right wing. Of course, they’re $1,059,524 over the NHL’s $81.5 million salary cap, according to capfriendly.com, so bringing back him could take some maneuvering.

“There’s a lot of players,” Pominville said. “I’m just kind of going day-by-day. There might be stuff happening, there might not be. Whatever happens, happens.

“I could never be sour at the organization for anything. I mean, they’ve given me more than I really ever expected.”

When Pominville returned to Buffalo – “We were coming back no matter what,” he said – general manager Jason Botterill offered him use of the Sabres’ facilities.

Botterill has said the Sabres and Pominville would keep the lines of communication open.

“He’s talked to me,” Pominville said of Botterill, his former AHL teammate. “He called me, he told me their way of seeing it. Even at our year-end meeting, he was honest, he’s like, ‘I can’t tell you now.’”

So while Pominville waits, he is spending some free time helping coach his son, Jayden, who plays for the Junior Sabres 10-and-under team.

After working out in the morning, Pominville returns to HarborCenter to help run practices with his friend and former teammate Matt Ellis, the team’s coach.

“I love it,” Pominville said. “We had a couple games this weekend. I was behind the bench coaching with Matty, I see the other assistant coaches, it’s just so exciting.”

Spending more time with his children – his daughter, Kaylee, is involved in gymnastics – is important to Pominville.

“I know I can still play, I know I can still produce,” he said. “But I think the biggest thing right now is family. We got to be in a situation that’s good for everyone. When you play, you kind of have to be a little selfish in some ways to be able to have success. You kind of miss a lot of things like family-wise. I want to make sure I’m there a little bit more.”

“That’s what I’ve always done,” he said. “That’s what I know most. Whether you play or not, I’ll always have the passion and the fire to try to win and try to improve. You can’t find it in anything else than the sport you know, I guess.”