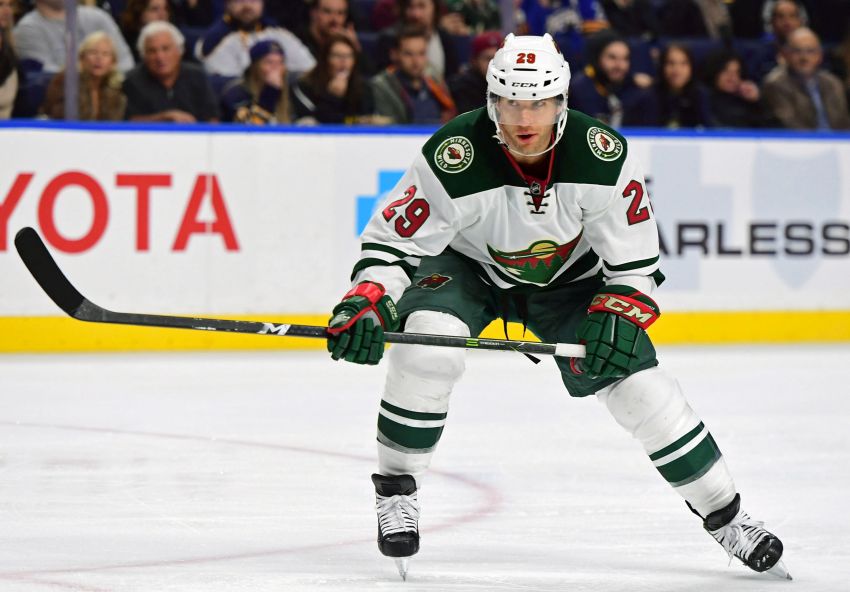 BUFFALO – After Jason Pominville learned he had been traded back to the Sabres today, like any good parent, he began worrying about how his children would react.

But right away, Jayden, his 7-year-old son, and Kaylee, his 5-year-old daughter, eased his fears.

“My little guy already has his jersey on right now, so he’s pumped and we’re excited,” Pominville said shortly after the Sabres reacquired him from the Minnesota Wild. “I couldn’t be happier for me and my family going somewhere that we know the city, going to a familiar situation.”

Jayden, it seems, is already familiar with the Sabres.

“(He) … said, ‘Oh, you got a chance to play with Jack Eichel,’” said Pominville, who was traded with defenseman Marco Scandella for wingers Tyler Ennis and Marcus Foligno.

A lot has changed since the popular 34-year-old Pominville left the Sabres late in 2012-13. Ennis and Foligno were the last remaining players from that team. Trading Pominville, their captain and a former NHL All-Star, signified the team and former general manager Darcy Regier were going until full rebuild mode.

Still, Pominville said he likes the team’s direction and thinks it’s better than when he left. He can also vouch Scandella will help.

“He’s a beast, a horse to play against, really competitive, has a rocket of a shot,” Pominville said on a conference call.

The Sabres needed another defenseman to play in their top four and chew up minutes. To pry away Scandella, the Sabres likely had to take Pominville and his $5 million salary.

Pominville’s role, of course, will likely be much different than his first stint, when he morphed from an unheralded prospect into arguably the Sabres’ best all-around player.

He hasn’t cracked the 20-goal mark since recording his third 30-goal season in 2013-14. He scored only 13 goals last season, although he had 47 points, including 40 at even strength.

Pominville believes he’s still reliable at both ends of the ice. Last season, Bruce Boudreau’s first as Minnesota’s coach, Pominville said he didn’t play the power play as much and lost some confidence. His average ice time of 14 minutes, 14 seconds was his lowest in 10 years.

“I still think I can be a good player and help the team out, whether it’s in an offensive role or a checking role,” he said.

Botterill, who noted the respect for Pominville around the league, said: “I’ve always had respect for Jason as a player.”

Naturally, given the Wild needed to shed salary and his diminishing role, Pominville figured he could be moved.

“You’re always thinking of maybe something could happen,” he said. “Obviously, with the Vegas (expansion) draft and I knew they were kind of crunched with salary. (The Wild) had a couple guys they needed to sign. They had to get rid of some salary. …

“The way I was utilized last year, you think there might be something going on. But at the same time, you never know.”

Pominville said he talked to Botterill, a former teammate, and new coach Phil Housley. They didn’t, however, discuss his role.

“They want to change the culture,” Pominville said.

Clearly, Pominville, like his Buffalo-born son, is excited about being back.

His overtime goal as a rookie that eliminated the Ottawa Senators in the 2006 Eastern Conference semifinal is one of the most famous moments in franchise history. At times, he almost seemed nostalgic recalling the Sabres’ runs to the Eastern Conference final in 2006 and 2007.

“Everything about it,” he responded when asked what he’s looking forward to most. We’ve always loved living in Buffalo. We always loved the area, great raise your family, great fans.”

The Sabres have named Chris Taylor coach of the Rochester Americans, the team announced today. The 45-year-old Taylor played and coached as an assistant with the Amerks and also played for the Sabres.

Botterill hired Taylor last season as an assistant with Wilkes-Barre/Scranton, the Pittsburgh Penguins’ AHL affiliate. Botterill and Taylor played together in Rochester.

The Sabres have let go of longtime scout Yuri Khmylev, who also played for the Sabres.

One thought on “Jason Pominville thrilled to return to Sabres, Buffalo”