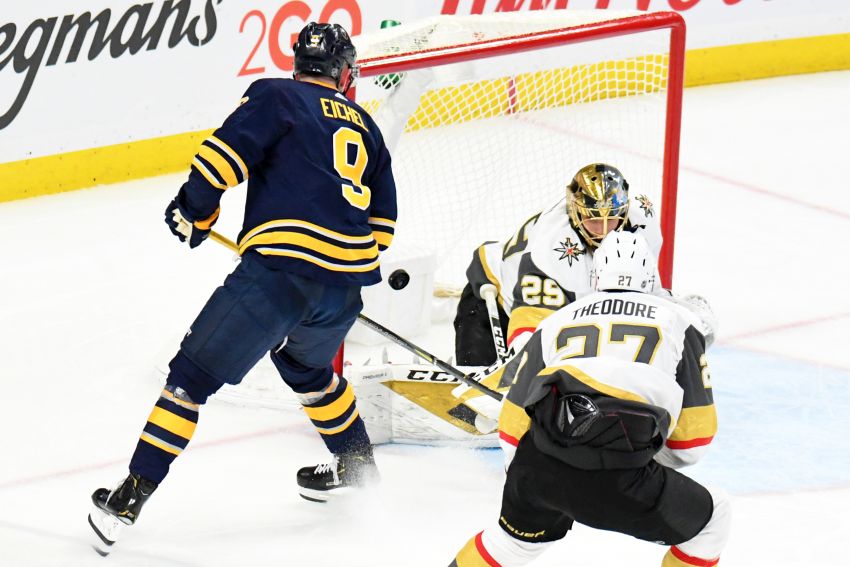 BUFFALO – For two periods, the Vegas Golden Knights stymied Sabres captain Jack Eichel, keeping one of the NHL’s most dynamic stars in check.

In the opening 40 minutes Tuesday, Eichel registered zero shots on goal and committed an uncharacteristic gaffe, telegraphing an ill-advised pass from deep in his own.

“I definitely made some bad turnovers,” Eichel said after scoring a scintillating game-winning goal late in the Sabres’ 4-2 victory inside KeyBank Center.

While the Sabres outscored the Golden Knights 2-1 in the second and entered the intermission up one goal, they looked awful during the period.

“We were all quite frustrated with the second period and came out of it actually unscathed,” Sabres coach Ralph Krueger said. “That was the language between periods.”

Then just 1:43 into the third period, the Golden Knights tied it, capitalizing seven seconds after Sabres defenseman Colin Miller was whistled for tripping and unsportsmanlike conduct.

Everything was playing out similar to Saturday’s 6-3 home loss to the Vancouver Canucks, a game in which the Sabres began the third period tied at 2 before imploding.

If the Sabres build momentum and rattle off some wins, Eichel’s goal 7:57 into the third period could be remembered as one of the season’s turning points.

“Definitely the genius that he has in him came out on that goal,” Krueger said of Eichel’s 28th goal, which tied the career high he set last season in 31 fewer games.

After Eichel grabbed linemate Sam Reinhart’s pass in his own zone and roared through the neutral zone with Zemgus Girgensons, Golden Knights defenseman Shea Theodore tried to sweep the puck away above the left circle.

“I kind of saw Fleury cheating a bit on the pass so I just tried to tuck in the short side,” Eichel said.

Krueger called Eichel’s goal before the crowd of 18,257 a “moment of brilliance.”

The Sabres, who played their final home game until Jan. 28, trail the Toronto Maple Leafs by seven points for the Atlantic Division’s final spot.

Still, 47 games into the season, they’re showing signs of progress instead of regression.

Eichel traces the Sabres’ response – they also beat the Detroit Red Wings 5-1 on Sunday – to the message Krueger delivers.

“Ralph’s able to hone the group in so well and get us to play the game that we know we need to play to win,” he said.

“He doesn’t carry his emotions over,” he said. “Maybe he’s mad at us for our performances here and there, but he never carries it over. He just brings such a good attitude to the rink every day and I think it just flows through the locker room with all the players.”

Krueger said: “What I do is keep the dialogue up with the guys, keep things honest, keep it real and have them also participate in the process.”

The Sabres’ power play, which had struggled for months, has scored two goals in consecutive games for the first time they did it three straight outings Oct. 5 to 9.

Reinhart, who had three points, and Okposo scored Tuesday.

“When it’s not going well, you need volume of shots,” Okposo said. “That seems to be opening everything up.”

He added: “We’ve gotten some movement, it hasn’t been as stagnant, guys are in different spots. We’re kind of just playing and letting your instincts and your skill take over.”

Goalie Linus Ullmark, meanwhile, made a few huge saves to keep the Sabres in the game.

“Give Linus credit,” Eichel said. “He made some huge saves.”