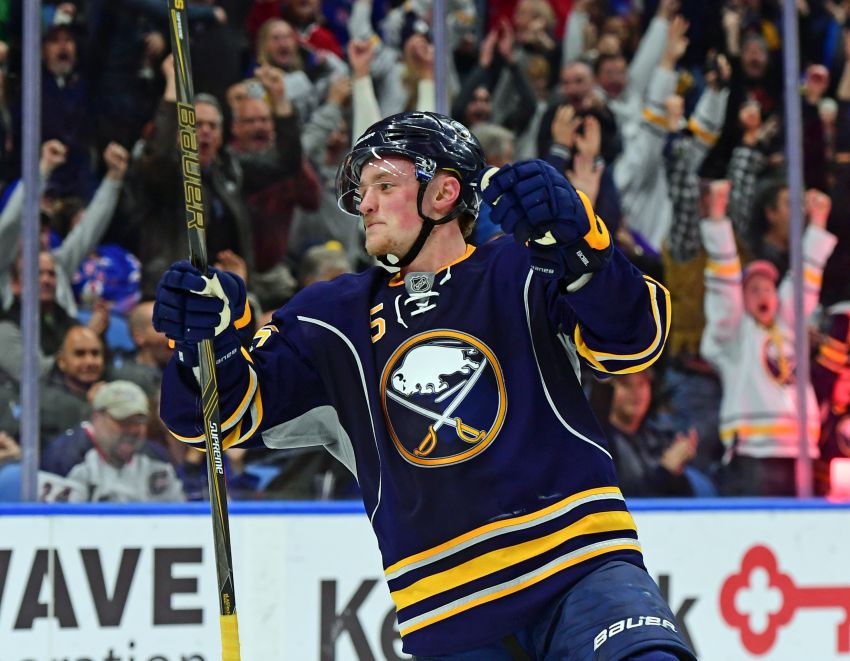 BUFFALO – For the first time this season, energy filled the KeyBank Center all night. Jack Eichel, the Sabres’ dynamic young star, was making his long-awaited home debut Thursday, and the normally quiet building buzzed with excitement.

“He showed some dynamic play and showed how he could take over the game there in the second period,” Bylsma said after Eichel’s late heroics buoyed the Sabres to a thrilling 4-3 come-from-behind win.

Eichel officially took over in the third period, scoring the tying goal on the power play at 12:45 – he also drew the penalty – and the winner at 14:28, his third goal in two games.

“It was great to be back here, I was definitely looking forward to it,” Eichel said. “To be able to win and get a little come from behind victory in the third period and be able to contribute makes it feel a whole lot sweeter.”

It was expected Eichel, who missed the first 21 games with a high left ankle sprain, would immediately boost the Sabres, who struggled to score and win without their second-year star.

But did the Sabres expect so much production this early from Eichel after seven weeks on the sidelines?

The Sabres have scored nine goals in two games with Eichel – they also won 5-4 on Tuesday in Ottawa, his season debut – as many as they had in the previous six contests.

“It’s nice, but I think it’s something you just want to stay consistent and keep doing this night in and night out,” Eichel said of his early production. “You know you’re not going to score every night. …

“That’s my biggest goal, just finding ways to try and contribute, and I’ve been able to do that the first two games.”

Eichel’s early hot streak has put him on a 92-goal, 122-point pace. Of course, he almost certainly won’t hit those gaudy numbers. But he’s off to a blazing start.

Eichel had the potent Rangers, one of the NHL’s heavyweights, on their heels late. He drew a hooking penalty early in the period before New York’s Adam Clendening was whistled for holding.

After skating into the zone, Eichel tied it by whistling a wrist shot by Rangers goalie Henrik Lundqvist from the right circle.

Later on, Eichel’s pass from below the left circle intended for Evander Kane hit New York’s Mats Zuccarello and slid in.

That whipped the Sabres portion of the 18,047 fans into a frenzy.

“That’s what gets us going,” Gionta said of the noise. “That’s the kind of energy we need and we can feed off of and hopefully take advantage of that home ice advantage.”

For good measure, a late chip by Eichel helped the Sabres clear the puck out of their zone.

“I’m impressed by his battle level, his willingness to play defense, play hard defense,” Bylsma said. “I think that’s something he’s worked hard on his game last year to be better at.”

The Sabres improved to 4-4-3 at home. The Rangers, meanwhile, fell to 13-1 when leading after two periods.

Some good luck also helped the Sabres just 18 seconds into the game, when Jake McCabe’s dump-in attempt from center ice hit Johan Larsson at the blue line and bounced past Lundqvist.

“That’s a nice one to have,” Gionta said. “It doesn’t happen too often. It sets a nice tone to the game, you can ease into it at that point and find your game, you’re not pressing.”