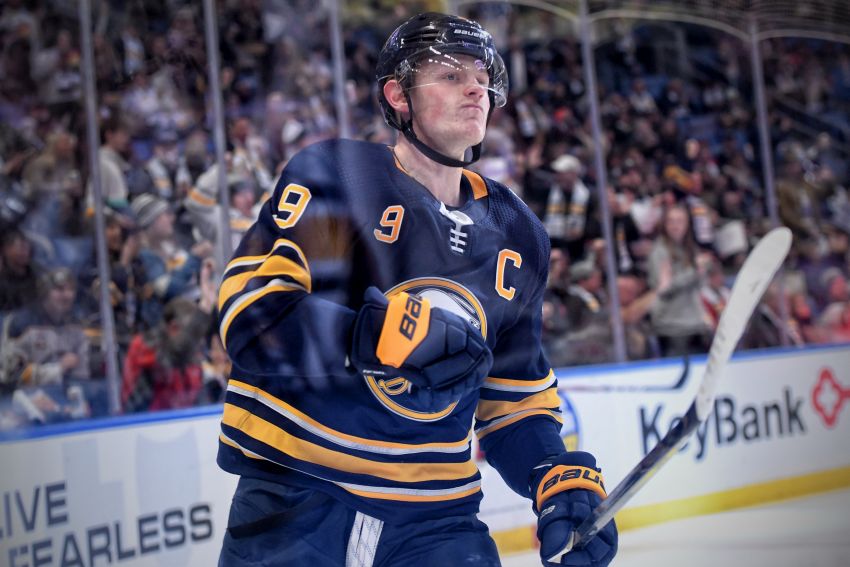 BUFFALO – Jack Eichel, of course, had scored four goals in a game before his dynamic, career-best performance in Saturday’s 4-2 win over the Ottawa Senators. The Sabres captain just can’t remember the last time he did it.

Eichel, 23, said he never scored four goals with Boston University or the U.S. National Team Development Program, his stops before the NHL.

It had been a while since the Sabres won (Oct. 25) or Eichel enjoyed a notable outing (two goals and four points Oct. 22).

The Sabres’ problems can be traced to a myriad of things. Eichel’s slump tops the list. They sorely needed their best player to lift them.

Following a terrific start, Eichel started sputtering, mustering only two goals (one in garbage time) and three points during the Sabres’ skid.

Eichel endured a rough night in Thursday’s 5-4 overtime loss to the Carolina Hurricanes, generating little. Other than a brutal defensive zone turnover, the center did nothing memorable in more than 25 minutes of ice time.

After that outing, Eichel, who has often said he has a pass-first mentality, received a text from his close friend Matt Moulson, a former Sabres winger.

Eichel possesses a lethal shot that has often been an underutilized weapon throughout his five-year career.

While Eichel registered five shots for the second straight game, he looked hellbent on being a difference-maker against the Senators, skating and shooting with more authority.

He opened the scoring early in the second period by zooming down the right wing and beating goalie Craig Anderson from the right circle. After Ottawa tied it later in the period, he scored from the slot.

Eichel recorded his second career hat trick – he had his other Dec. 15, 2017 – 12:13 into the third period, beating Anderson under the crossbar from the right circle and putting the Sabres up again.

“There’s no question his hunger to make plays is larger often than his hunger is to shoot,” Krueger said. “It was really good to see him shooting today. We’ve been speaking about it a lot lately in he really wants to get a balance.”

Eichel scored into an empty net to complete the first four-goal game by a Sabre since Thomas Vanek on April 10, 2010 in Ottawa.

It was the kind of night everyone envisioned when the Sabres drafted Eichel second overall in 2015.

“He’s in a steep learning curve,” Krueger said of the first overall pick in 2018. “We’ve had a lot of situations in the last few weeks that have been mentally draining on the team. We’ve had to dig deep today to get this win. We’re making decisions for the team in the moment, and it was a coaching room decision, not against Rasmus at all. It was for the other guys to just tighten things up.

“It worked, but Rasmus will grow from it, learn from it and move forward quickly from it, I’m sure.”

Pressed for more details, Krueger said Dahlin’s struggles can sometimes be traced to “wanting too much maybe.”

Dahlin, Krueger said, must find “a balance between his amazing balance and skill and what we need.”

As a glum-looking Dahlin sat on the bench, Eichel grabbed him and gave him a quick pep talk.

“I expect him to bounce back in a good way. He’s such an important part of our success moving forward.”

Sabres winger Kyle Okposo left the game with an undisclosed injury in the second period after he ran into Ottawa defenseman Ron Hainsey leaving the bench.

Okposo has a history of concussions, having suffered three in the last four seasons.

“We’re just going to still assess him and make a decision then tomorrow,” Krueger said. “At the moment, all I can say is it’s a day-to-day situation.”

The Sabres play a road game tonight against the Chicago Blackhawks.