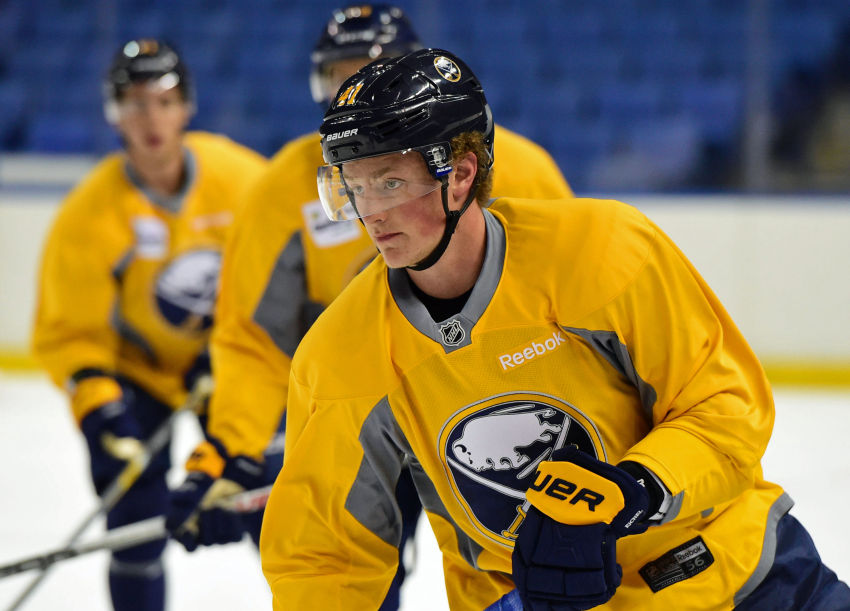 BUFFALO – It took just one 25-second shift, his first wearing a Sabres uniform, for rookie Jack Eichel to create his first highlight.

There will likely be many more over the coming years.

Seconds into Sabres’ 6-2 rookie camp exhibition win against the New Jersey Devils on Saturday, Eichel snagged the puck in his own zone with clear ice ahead, and the announced crowd of 5,505 inside the First Niagara Center began to buzz.

An instant later, the fans roared when Eichel fed Nick Baptiste perfectly for a two-on-one goal.

“It was the right way to start the game,” Eichel said.

Of course, it won’t always be that easy for Eichel, the second overall pick in June. The 18-year-old didn’t record a point the rest of the game. Still, he dazzled at times, drawing oohs and ahhs from the fans.

Eichel wasn’t the only standout in the first of the two “Prospects Challenge” games. The Devils looked overmatched against the Sabres’ top forward prospects, a crop that ranks among the NHL’s best.

“I know it’s a prospect tournament, (but) you’re suiting up against another team, you’re putting your game sweater on, so it seems like a real game,” Eichel said. “It’s nice to get off on the right foot. We’re a pretty confident bunch right now.”

To compete in today’s NHL, the Sabres desperately need game-changing talent up front. As Saturday showed, they have some standout prospects in the pipeline beyond Eichel.

Remember Rodrigues’ name. The free agent scored 61 points in the NCAA last season, second only to Eichel’s 70. The 22-year-old dished the puck to Eichel on Baptiste’s first goal, stripped a defender down low on the second goal and later scored on the power play.

“He’s a pretty good player, huh?” Eichel said. “I think he kind of flew a little bit under the radar last year in college. I think he’s definitely making a name for himself. You see his skill. He’s a good player, that’s for sure. I think he’s going to show a lot of people that.”

Why do Eichel and Rodrigues click so well together?

“We’re both smart players, and we’re both able to find each other easily,” Rodrigues said. “I think we obviously took advantage of that. He’s a great player, I’ve said it time and time again. Every time we step on the ice we seem to click, seem to play well.”

He added: “I think I belong here just like anyone in this room. I’m just obviously trying to prove that.”

Notes: Forward Cason Hohmann, a free agent from BU with an AHL contract, scored the other goal. … Goalie Andrey Makarov started before former Canisius College goalie Keegan Asmundson relieved him about halfway through. … Instead of using a captain for the two games, coach Randy Cunneyworth named three alternate captains: Eichel, Reinhart and Dan Catenacci. … Eichel, who will wear No. 15 during the season, sported the No. 41 he was assigned in development camp. … The Sabres play Monday against the Boston Bruins.