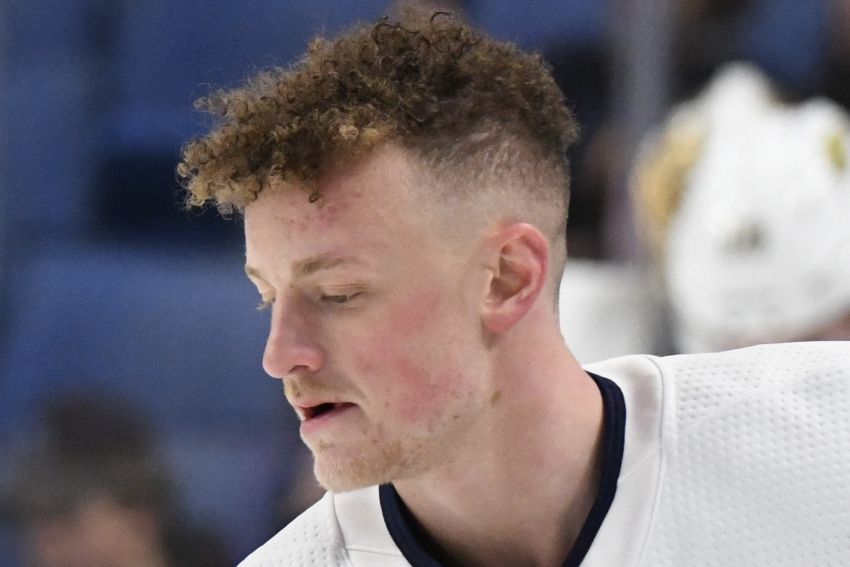 Jack Eichel spent six seasons in Buffalo before being traded to Vegas on Nov. 4. ©2022, Micheline Veluvolu

BUFFALO – The scene looked downright odd. There was ex-Sabres captain Jack Eichel, clad in his Golden Knights gear with the team’s backdrop behind him and a flag in front of him, talking about his new life in Vegas.

In the same spot in KeyBank Center where he often spoke to the local media, Eichel, 25, acknowledged on Wednesday it felt a little awkward walking in as a visitor.

For six seasons after the Sabres drafted him second overall, Eichel was the face of the franchise and its most dynamic talent. He was shouldered with the expectations he would lead them back to glory, and he had an eight-year, $80 million contract to prove it.

But the Sabres kept losing. The ultra-talented center reportedly wanted out long before he injured his neck last season and the Sabres refused to let him undergo the disc replacement surgery he preferred.

The relationship soured so badly that in September, they stripped him of the captaincy and told him to stay home for training camp as they tried to trade him.

Eichel finally had the surgery he wanted shortly after the Sabres dealt him Nov. 4. He returned to the lineup Feb. 16.

Still, Eichel, who will play his first game against the Sabres tonight, insisted he’s not bitter about anything.

“No bitterness. Nope. None whatsoever,” Eichel said Wednesday after Vegas practiced. “I had a phenomenal time here in Buffalo. Lived out a childhood dream playing in my first NHL game. The organization, the city was nothing but great for me and my family. There’s no bitterness in me whatsoever.”

But will fans show any bitterness toward Eichel? Will they boo him? He said he has thought about the type of reception he might receive.

“But I can’t control that,” Eichel said. “I feel like I gave everything I had while I was here in my time in Buffalo, to the organization, to the community. I’m at peace with all of that. Whatever the reception is, I’ll be able to handle it. It’s hockey and when the puck drops, you get a shift under your belt, I think it just becomes a game.”

Golden Knights coach Pete DeBoer knows tonight will be more than just a game for Eichel. The American put too much time and sweat into the Sabres.

It matters more than most.

“It’s tough,” DeBoer said. “This is not an easy situation for players … When when those guys are the face of the franchise, they’re all in, they’re invested. He was invested in Buffalo in this team and this franchise and these fans. So that’s not easy. I know it’s something that is weighing on him and we’ve got to work through it together here.”

Eichel said he enjoyed a great relationship with Sabres owners Terry and Kim Pegula and is grateful for what they gave him.

“It is a business and the team, they stuck by their doctors’ opinions, and I respect them for that,” he said. “And I hope people can respect me for standing by what I believed in and what I thought was right for myself. I hope that me being back playing and healthy, I hope that can be an example of somebody sticking by what they believe in and having a successful outcome.”

The Golden Knights, of course, have enjoyed unprecedented success throughout their five-year history. As Eichel’s acquisition illustrated, they’re trying to win the Cup this season. Anything less than that would be considered a failure.

They had to clear millions in salary cap space by placing winger Mark Stone, one of their best players, on LTIR.

In Eichel, the Golden Knights landed the No. 1 center they have long coveted. After missing nearly a year – Eichel was injured March 7, 2021 – he has started finding a groove. Through his first 10 games, he has compiled three goals and seven points.

DeBoer said Eichel, who has never played an NHL playoff game, possesses “a lot of substance” and “desire to win.”

“There’s a lot of desire to fit in to what we’re trying to do, whatever that is, at the expense of his personal statistics in order to win and fit in and try and pursue a Stanley Cup,” he said. “So … he’s gotten better and better every night.

“I mean, last game he was the best player on the ice on either team. Nine shots. He’s big, he’s strong. Comes as advertised, physical. I think his game, I have no doubt his game translates to playoff success. So we’ve got to get there and give him that opportunity.”

The Golden Knights are in third place in Pacific Division, four points ahead of the Edmonton Oilers. Eichel’s Sabres teams were never in a playoff spot this late in the season.

Eichel’s tenure in Buffalo will likely be remembered for the Sabres’ dysfunction – they employed four coaches and three general managers – and futility on the ice.

Still, Eichel hopes his time in Buffalo will be remembered for more than that.

“I felt I made a really good impact on the community,” he said. “That was one thing that I always tried to do from the moment I was drafted. I felt like the city and the people here gave me so much, I wanted to try and give back as much as I could. But you know what, you look at it, and minus the last maybe 12 months, there was a lot of really good moments, and I thought I had a lot.

“I hope the city can maybe look at it for the previous five and a half years, whatever you call it, and everything good that happened then and understand maybe where I’m coming from.”

3 thoughts on “Jack Eichel wonders about reception in Buffalo, not bitter toward Sabres”