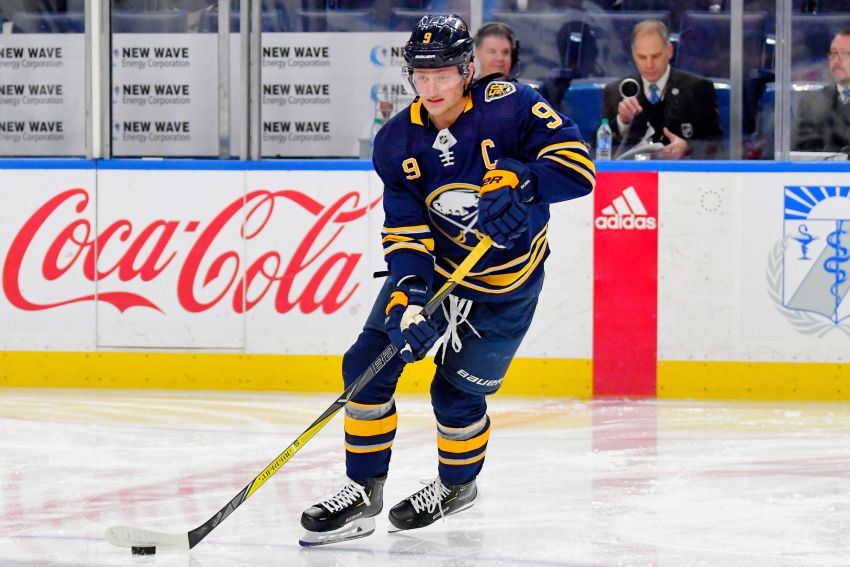 Jack Eichel saves some of his best outings for Toronto. ©2020, Micheline Veluvolu

BUFFALO – Jack Eichel smirked when he heard the question. The captain had just scored the game-winning goal, igniting a late outburst that cemented a critical victory against the Sabres’ fiercest rival, the Toronto Maple Leafs.

Clearly, Eichel revels in beating the Leafs and sending their legions of loud fans – they comprised at least 60% of Sunday’s capacity crowd inside KeyBank Center – home unhappy.

“I enjoy it,” was all Eichel would say following the Sabres’ third straight win, a wildly entertaining 5-2 triumph in which they scored three goals in 91 seconds to break open the game.

You think? Eichel celebrated his power-play goal 6:06 into the third period by skating to the glass and signaling for some Leafs fans in the front row to sit down.

“You guys can make your own assumptions on it,” Eichel replied when asked about the hand gesture.

You can assume every Sabre loves throttling the Leafs, who bring the best out of Eichel. The ultra-talented center has scored 14 goals and 23 points in 17 career outings against them. His .824 goals per game versus Toronto ranks first among active players.

While Eichel will receive most of the attention, most of the lineup contributed to Sunday’s win before 19,070 fans.

“It just kind of snowballed from there,” Vesey said.

The Leafs, who played Saturday, made a late push. Goals from winger Egor Korshkov, who was making his NHL debut, and center Zach Hyman tied it early in the third period. But the Sabres controlled most of the game, buzzing around goalie Frederik Anderson, who stopped 31 shots.

Sabres center Johan Larsson opened the scoring 1:32 into the second period before winger Conor Sheary made it 2-0 at 9:42.

“As a team we did really well,” Okposo said. “I thought we handled the mostly ups we had in the game. They made a push there at the beginning of the third, they tie the game, Hutts bails us out, makes a couple of huge saves, and then we’re able to roll from there.”

Vesey said: “Caught them on a back-to-back. I’m not sure if they were tired from last night, but I thought we had a lot of energy.”

The Sabres had to beat the Leafs to maintain any hope of catching them for third place in the Atlantic Division. Their chances of roaring up the standings and grabbing the final playoff spot are still slim.

But eight points, the Sabres’ current deficit, is a lot easier to make up than 12.

The Sabres opened a stretch in which they played nine of 10 games at home by losing three out of four (1-2-1). They closed it by winning their last three.

“There was a desperation today that we’ve been building something here this week at home,” Sabres coach Ralph Krueger said. “This home stand began very disappointingly and we’ve fought and worked hard to get our game back after the (NHL All-Star) break. …

“As the others are raising their games, we need to match it, and so this has been a really good week at home to give our fans what I was saying a week ago they deserve. Now we’ve got to take this game on the road.”

Given the rabid support for the Leafs in the building Sunday, it might’ve felt like a road game for the Sabres. Still, the Sabres enjoyed the special atmosphere.