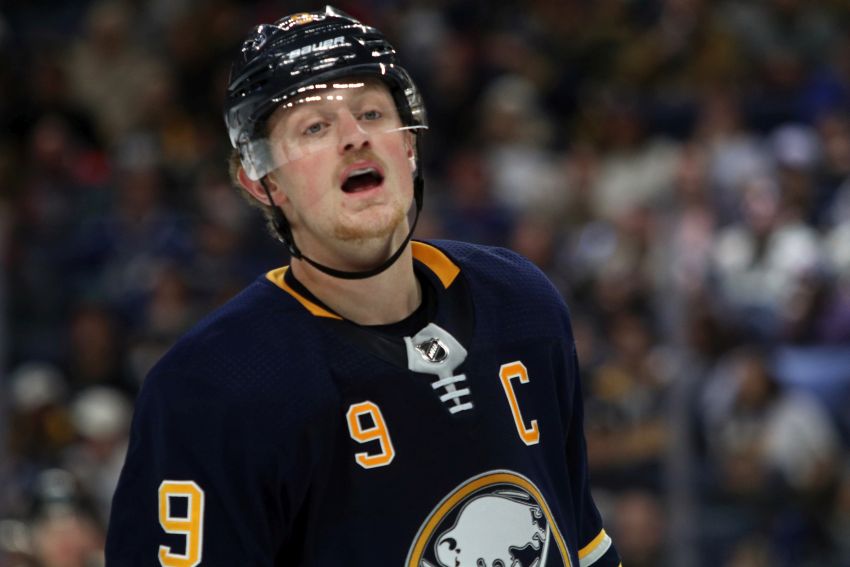 BUFFALO – Yes, the Sabres played pretty well against the Winnipeg Jets, hanging with the heavyweight club until the waning seconds Sunday afternoon.

Still, the Sabres shouldn’t take much solace in putting together a solid effort. They lost 3-1, missing a splendid chance to climb past the Carolina Hurricanes, who fell 3-2 in New Jersey, into ninth place in the Eastern Conference.

“I don’t know how many times you can take the moral victory anymore,” said captain Jack Eichel, who scored the Sabres’ only goal. “We’re 55 games into the year; how many times can we say, ‘Oh we played well but we didn’t get any points?’ Other teams are getting points, moving up the standings and we’re not.

“I think the moral victories are a thing of the past at this point. We don’t get any points and they win the game.”

Sabres goalie Carter Hutton, who made 26 saves in his first action since Feb. 1, echoed Eichel.

“It’s just frustrating to be losing, to be honest,” Hutton said. “At this point, I’m not really too worried about moral victories.”

If the Sabres hope to snatch a playoff spot, they must start rattling off wins. After beating the Detroit Red Wings 3-1 a day earlier, they missed a chance to win two straight games for the first time since Dec. 11 and 13.

“We outplayed them for most of the game,” said Sabres winger Kyle Okposo, who got caught on the ice for 1:55 before the Jets’ go-ahead goal. “They had their chances, but they made a play when it mattered.”

While the Sabres have showcased little consistency for months, they’re only two points out of the final wild card spot. They’re still in solid shape.

But a loss like Sunday’s – Jets captain Blake Wheeler scored the winner with 3:55 left in the third period – certainly stings.

Even eking out a point by getting the game to overtime would’ve been huge.

“We need points,” Sabres coach Phil Housley said. “It was tough because … we came and we charged. It was a good, solid game by us. But at the end of the day, maybe find a way to get into overtime.”

Wheeler scored after the Sabres couldn’t get the puck past the center red line and the Jets hemmed them in their own zone. They kept cycling before Josh Morrissey moved from the point to the left circle and fed Wheeler in front.

“There’s so many things that lead up to it,” Housley said of the goal. “We got caught in our zone for quite a bit of time, but I thought our guys dug deep and really defended well. We had an opportunity in the neutral zone to get a puck deep and that’s what started it.”

Sabres defenseman Matt Hunwick added: “We just lost track of one guy. That’s what happens sometimes when you get tired, you make mental mistakes.”

The Sabres mostly eliminated those early on before the crowd of 17,966 inside KeyBank Center, pumping 14 shots on Jets goalie Connor Hellebuyck during a scoreless first period.

“We were moving the puck quick,” Housley said. “In the first 10 minutes we were transitioning, we were fast. We started to slow it down a little bit and we didn’t keep that mentality of keep going north.”

“But we didn’t break, we fended it off really well,” Housley said. “We came back on our own, we get that goal to tie it up, which was huge.”

For the first time since Jan. 5 and 8, the Sabres have allowed two or fewer goals in back-to-back games.

The Sabres have two contests left – Tuesday against the New York Islanders and Friday versus the Rangers – on their seven-game home stand. So far, they’re 2-2-1.