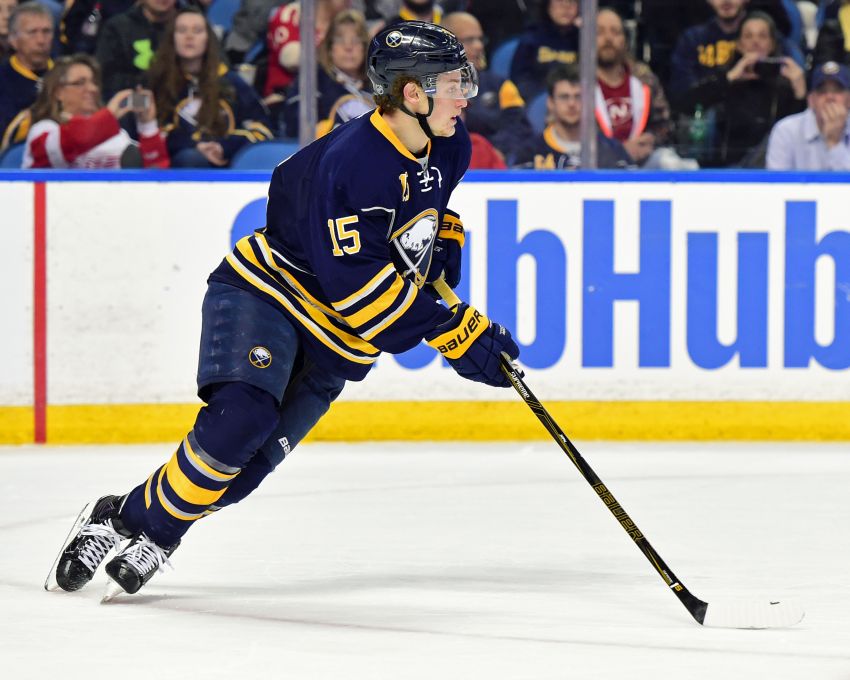 BUFFALO – Within minutes Friday, screen grabs of Robin Lehner’s fierce eyes – wide and hellbent on sending a message – started spreading all over the Internet after the goalie’s emphatic response to an ugly hit on Sabres teammate Zach Bogosian.

“That should be one of those big heads and make it for the fans to wear,” coach Dan Bylsma joked Saturday after the Sabres prepared for this afternoon’s tilt against superstar Sidney Crosby and the Pittsburgh Penguins.

By Saturday afternoon, a shirt featuring Lehner’s stern look was for sale.

Kidding aside, Bylsma loved his team’s strong reaction after the Blue Jackets’ Boone Jenner hit the defenseman head-first into the end boards with 8:30 left in the Sabres’ 4-0 win in Columbus.

Marcus Foligno immediately jumped Jenner, and in the ensuing melee, the fiery Lehner dropped his blocker and glove and tried to fight.

“I don’t even think I blinked my eyes and his gloves were off … and four other guys were in there,” Sabres defenseman Josh Gorges said inside HarborCenter. “Our goalie sitting there, he wants to be a part of it as well. Those things go a long way.”

Lehner, who called the hit “disgusting,” later removed his mask and yelled at Jenner as he skated away, creating some Internet gold.

“I think that’s the way we have to be as a group,” Bylsma said. “I think as a group … we need to come together.”

Five months into the season, the revamped Sabres are still a work in progress, although they’ve won three of the last four games and have a point in eight of the last 10 contests.

In fact, if the Sabres win today without the help of overtime or a shootout, they’ll have their first three-game regulation winning streak at the First Niagara Center since March 2011.

Whatever happens the rest of the season, the Sabres have built a strong foundation that could last for years to come. As the quick reaction to Jenner’s hit illustrated, they have perhaps their tightest-knit group in a long time.

To a man, the players will say how much they care about each other.

“It’s like a brotherhood in there,” Bogosian said. “You got to stick up for each other.”

Bogosian appreciates his teammates sticking up for him.

“They know that I would do that for them,” he said. “I know Robin, you never really see a goalie go after someone. It’s a good feeling. It goes right from our top players right down to everyone. We bought into this. We’re emotionally invested. That’s the way we have to be.”

Gorges, an 11-year veteran, understands finding the right group is a difficult task.

“We’re fortunate where we have a group of guys that everybody gets along,” he said. “There’s a genuine respect for our teammates, for each other, and I think that goes a long way. I’ve played on enough teams with enough guys around the league and my years going back to junior, you don’t necessarily always get teams like this.”

“It’s not there on every team and something this team has developed,” Bylsma said about the chemistry.

Eichel’s only one of about 20 players on the roster. Still, at just 19 years old, the center’s already the face of the franchise. His actions and words matter.

Given his many talents, Eichel could’ve walked into the dressing room and acted like a cocky kid. Instead, his penchant for having fun and laughing off the ice quickly won over his teammates.

“He’s nice and loud,” Bogosian said. “He fits in great with our group. Everyone fits in. It’s fun. Obviously, Jack’s a very, very high-class player. If you get a chance to know him, he’s a funny person, energetic, charismatic. He’s fun to be around. He fits in just fine.”

When asked who the funniest player on the team is, Eichel responded, “Uh, probably me.”

“It’s definitely a tight group,” Eichel said. “We do a lot of things together, almost everything. It seems like everyone’s pulling the right way. … It makes it fun coming to the rink every day to see them.”

He added: “I’m always saying something, usually messing around or picking on (Jamie) McGinn.”

In other news, Bogosian practiced Saturday sporting seven stitches and is fine. Meanwhile, defenseman Cody Franson, who left earlier in the game after Scott Hartnell boarded him, missed the session and is out today. Bylsma said Mike Weber will replace Franson.

“At this point, (we’re) unsure really of what we’re dealing with,” he said. “He’s suffering from some neck issues as well.”

Meanwhile, O’Reilly had a maintenance day Saturday and is “probable” for the Penguins, Bylsma said. Lehner will start again.