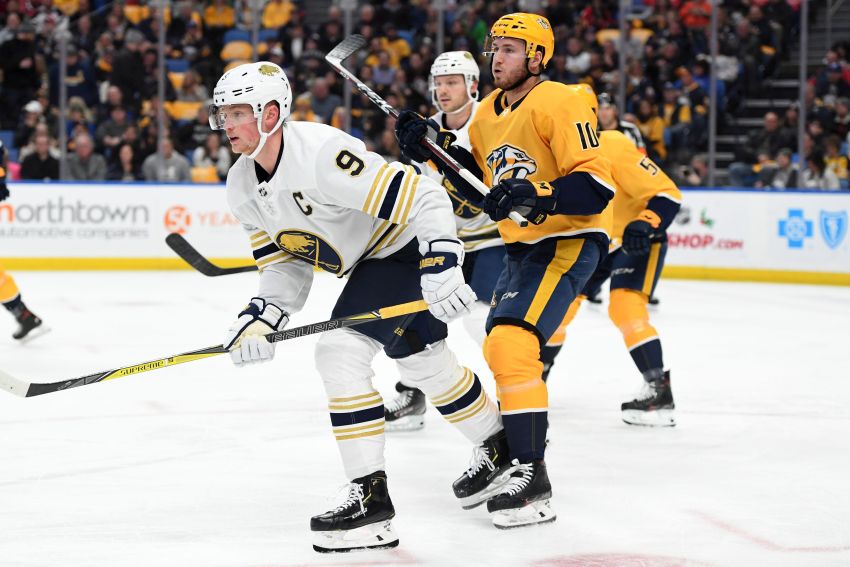 BUFFALO – Thursday was “Aud Night” at KeyBank Center, a special 50th anniversary promotion that celebrated the Sabres’ first home and the 1980s throughout their entertaining 4-3 win over the Nashville Predators.

In addition to giving out Memorial Auditorium shirts – the Sabres laid out gold, red, blue and orange ones on the seats to match the old building’s unique look – alumni attended and the Sabres sported their special white anniversary jerseys.

“It adds a little bit of extra energy in the building and obviously in our locker room it adds a little bit more energy,” Sabres captain Jack Eichel, who scored twice to extend his point streak to 15 games, said of Thursday’s celebration.

Still, these days, the Sabres can create energy and excitement without any special promotions.

After years of futility here – the Sabres won 11 home games all of 2017-18 – they’ve quietly morphed into a heavyweight at KeyBank Center, starting the season 10-2-3

Meanwhile, fans, who have been staying away in droves, might finally be buying in. The normally quiet rink was noticeably louder as Thursday’s tight game went on.

“Even after giving up a lead in the second period you could feel the push from the fans and the belief in what we’re doing here,” Sabres coach Ralph Krueger said. “That’s just another level of support that a team needs as they’re evolving is not only confirmation from each other from scores but also from your fan base, that they like the game we’re playing.

“We want to play on our toes, we want to stay aggressive right through game no matter the scores. We’re pleased to see the people embracing it.”

Fans, of course, embrace winners with a high-octane attack. The Sabres have won three straight games for the first time since Oct. 17 to 22. At home, they’ve rattled off four consecutive victories, scoring a whopping 22 goals.

“It’s important to play well at home,” Eichel said. “I mean, the best teams in the league do it, they make it a tough place to play and we’ve been trying to do that here. Just trying to make it a better and better atmosphere every night. I thought it was really good tonight.”

Eichel, not surprisingly, has been the catalyst. He tied the game early in the second by deflecting a shot before deking a defender in the left circle and roofing the puck by goalie Juuse Saros later in the period.

The slick center’s 22 goals rank second in the NHL. Over his streak, which is tied for the longest in the league this season, he has scored 14 goals and 27 points.

For good measure, Eichel pulled the puck off his own goal line in the third period, the best defensive play of the night.

Olofsson did that 8:29 into the third period, scoring the game-winning goal before the crowd of 17,211. After missing defenseman Brandon Montour’s backdoor pass, the Swede quickly grabbed the bounce off the end boards and scored from the other side of the net.

“I kind of saw that their goalie didn’t know where the puck was,” Olofsson said. “I felt like I had a little bit of extra time to make sure I got my shot off.”

Olofsson, having compiled seven goals and 19 points in the last 18 games, is scorching. He leads all NHL rookies with 29 points.

What has helped Olofsson, who plays beside Eichel, develop so quickly over the past month or so?

“The thing Victor has learned to do really fast at warp speed is battle to gain and retain possession in one-on-ones against the heavier guys in the league, because that’s who they’re playing against, the better defensemen of the opposition, the heavier lines,” Krueger said. “He’s winning his battles, coming out with possession. His pushback has increased tremendously at a very rapid pace.”

Ullmark, however, settled down, making 36 saves. The Swede is 6-1-1 with a .923 save percentage in his last eight outings.