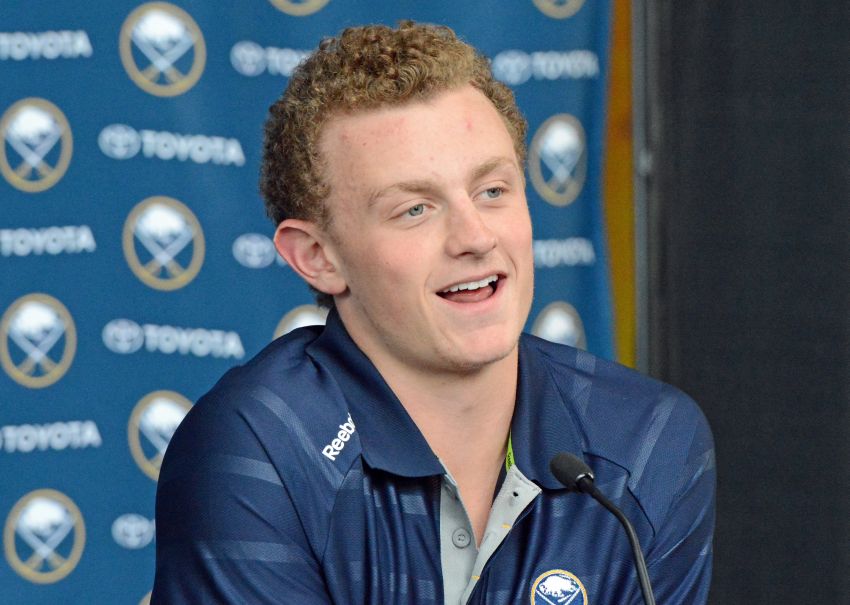 BUFFALO – Before Sabres center Jack Eichel left for his three-week gig with Team USA’s entry at the world championship in the spring, the 18-year-old had some doubts he was ready for the NHL.

But the short experience in the Czech Republic taught Eichel some valuable lessons. He talked to guys, developed a sense of what it’s like to be a pro and gained confidence standing out on the ice against men, many of whom play in the NHL.

“I came back pretty set on moving on,” Eichel said during a news conference to announce the three-year, entry-level contract he signed Wednesday, five days after the Sabres selected him second overall at the NHL Draft.

So while Eichel never publicized his plans to leave Boston University after a dominant freshman season, he’s been quietly gearing up to play in the NHL for more than a month.

“I think I need to challenge myself to get to the next level,” he said inside the First Niagara Center. “Since I was 4 years old this is all I wanted. Everything I’ve done my entire life is to be a professional ice hockey player.”

He added: “Looking at the Sabres organization, there’s such a bright future here. It seems like such a no-brainer.”

Suddenly, a year removed from high school, Eichel has become the face of the Sabres. The expectations on him are enormous. Sabres general manager Tim Murray called Wednesday a “great event in this organization’s history.”

Eichel’s life changed forever Wednesday. So, perhaps, did the course of the Sabres franchise, which strategically timed its rebuild to get a dynamic prospect like Eichel, one of the most talented youngsters in a generation.

“I’m sure I have 100 times more expectations next year,” Eichel said. “But that’s part of it. I think that brings out the best in me. I want to work to fulfill those expectations and exceed them.”

Eichel kept his emotions in check before the draft. But he’s been giving off a different vibe since Friday. He’s excited, and he can’t hide it.

“I wanted to be a part of this organization,” he said. “All the pieces kind of fell the way I wanted them to.”

Eichel also wants to be a part of the community. He clearly feels comfortable in the city. He said he loves being recognized around town.

So what are Eichel’s goals? First, “I still have to make the team first,” he said. Beyond that, he hasn’t thought about much.

“It’s really been a whirlwind the last week,” he said. “I’m sure I’ll be able to sit down and set some goals for myself personally. Everything’s gone so quickly right now I’m trying to grasp it all.”

He added: “With the right attitude and work ethic, I think I can make an impact next year.”

The Sabres will almost certainly ease Eichel into the lineup. He likely won’t be the No. 1 center, at least early. When Eichel was questioned about being the team’s No. 2 pivot, Murray gave Sabres coach Dan Bylsma, who was sitting in the front row, a sly grin.

Bylsma, who coached Eichel with the U.S. in the spring, doesn’t “chuckle at all” at Eichel’s belief he has to make the team.

“I’d like to say things are handed out in this game, but they’re not,” Bylsma said. “I think it’s fun to ask the question, ‘Where’s he going to play?’ or, “What would be a good fit? …

“I think Jack will tell you there are areas he needs to get better at. He knows it because he played against good players over in the world championship. I think he does have to come in with the mindset that he has to earn his spot on our team.”