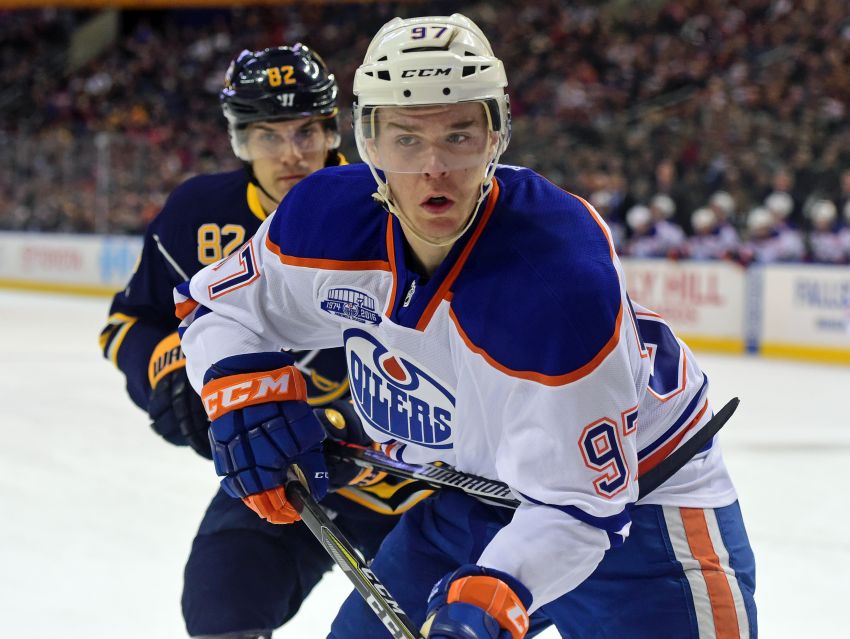 BUFFALO – Dan Bylsma, as he loves to do, kept accompanying his words with a sly grin. The so-called rivalry between phenoms Jack Eichel and Connor McDavid is a “made-up” scenario, the Sabres coach said Tuesday.

The Sabres’ 2-1 overtime loss to McDavid’s Edmonton Oilers was the first-ever NHL meeting between the “generational talents” drafted first and second overall last year. The rookies barely know each other.

How could they truly be rivals?

“The hype is produced,” Bylsma told a packed media room prior to the game.

Still, Bylsma understands why the fans and media – everyone, more or less – produces so much of it.

“They’re great players,” he said in the same breath. “We want to watch them both play. I’m curious to see how Jack does, how Connor does. I don’t think there’s a head-to-head matchup that’s going on.”

Naturally, both slick centers downplayed Tuesday’s tilt. It didn’t help McDavid scored 22 second into the game and the winner.

“We’re playing the Oilers tonight. We’re not playing Connor McDavid,” Eichel said. “Obviously, he’s a key component to their team. He’s a good player. You should be aware when he’s on the ice.”

Of course, the 19-year-olds acknowledged the game – remember, the Oilers rank 30th overall and the Sabres 26th – is good for hockey. The First Niagara Center had a buzz Tuesday morning usually reserved for the second or third round of the playoffs, not a match between two dregs destined for another lottery pick. Both players spoke at a podium instead of inside the dressing room because of the demand.

“It’s something you take as you go along in your career,” he said. “You just kind of go with it. It’s not really a big deal.”

Eichel, however, is only 64 games into his career. McDavid, meanwhile, has only played 28 contests.

Despite being linked together, Eichel and McDavid have only met a few times. Sure, they spent time together during draft activities and share a mutual respect.

McDavid knows Buffalo, a city that fawned over him a year ago, well. During his illustrious junior career with the Erie Otters, he often visited here. In his only other game here, he scored four points.

In other Eichel-McDavid news, the two should be World Cup teammates later this year. Both are cinch picks for the Under-23 North America roster that will be announced today.

In less than a season together, Eichel grew close to winger Jamie McGinn, who the Sabres traded to the Anaheim Ducks on Monday.

On the ice, Eichel often played with McGinn, a 13-goal scorer. Off it, he loved to joke around with his friend “Jimbo.”

The Sabres recalled rookie Dan Catenacci and Cal O’Reilly prior to the game, giving them 18 healthy forwards.

Catenacci grew up down the street from McDavid in Newmarket, Ont., and spent years playing with his older brother, Cameron. Even when McDavid was a kid, Catenacci could see he possessed incredible talent.

“You see guys with high-end skills as kids, but you never know if they’re going to turn out,” Catenacci said. “I’ve always been very impressed with him.”

Catenacci, who played his fourth NHL game, sometimes skates with McDavid in the summer.