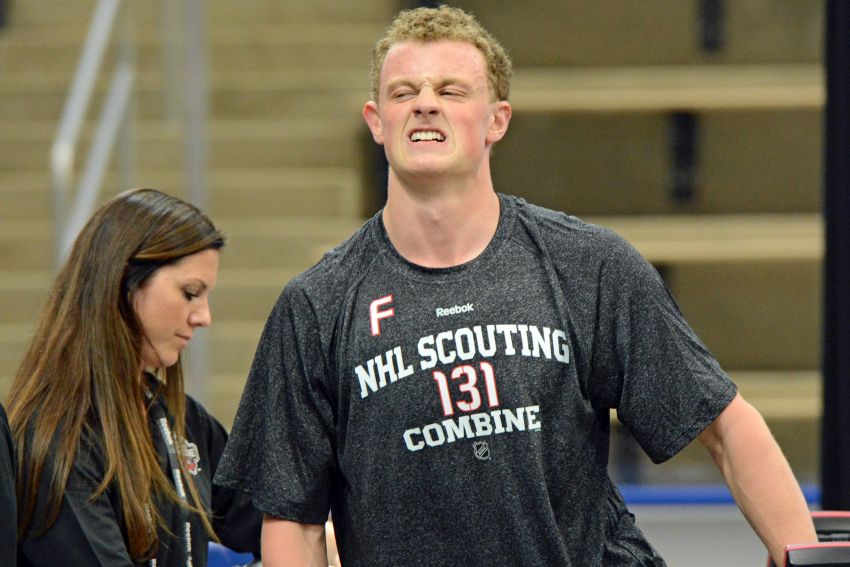 FORT LAUDERDALE, Fla. – Jack Eichel’s close to deciding whether to turn pro and join the Buffalo Sabres or return to Boston University. In fact, don’t be surprised if the 18-year-old center announces his decision Friday night at the podium after he’s selected second overall at the NHL Draft inside the BB&T Center.

Heck, Eichel sounded ready to share his decision tonight during a pre-draft news conference. He’s clearly tired of the speculation and wants it to end.

“I think I’m a lot closer to my decision,” he told a throng of reporters and cameras inside the Fort Lauderdale Westin Hotel.

Eichel has talked to his Boston University coaches, his advisors and his family about his decision.

“I think it’s nice to finally personally come to a conclusion on what I want to be doing,” he said.

Why hasn’t Eichel just announced his plan yet?

“I haven’t been drafted,” he said. “I’m kind of waiting to be locked in with a team. That’s the next step.”

Eichel wouldn’t even concede he would be drafted.

Eichel – perhaps reluctantly – spent the day on a tour of the Florida Everglades with the other top draft prospects. When Mitchell Marner and Noah Hanifin put 12-foot boa constrictor around their necks, Eichel was 25 yards away in the boat.

At one point, a microphone touched Eichel’s back when he was sitting down.

“I think he thought a snake bit him,” prospect Dylan Strome said. “Like a little baby we were calling him.”

Eichel’s not a fan of alligators, pythons or snakes.

“Anything like that,” he said. “But we didn’t see too many alligators. We only saw two. I was in the middle of the boat, so it was all right.”

But Eichel probably enjoyed spending time with the prospects and Connor McDavid, the only youngster who will be selected ahead of him. The two, who didn’t know each other until earlier this month, have clearly bonded during the draft process.

“I spent the last few days and some time in Chicago with him,” Eichel said. “To be honest, I don’t think we’ve talked about hockey once. We don’t really think about stuff when you’re with your friends. When you’re hanging out with a guy you’re compared to all the time, you never think about it. We talk about a million other things.”

McDavid added: “The six of us, we’ve become some pretty good buddies in that group. We’ve gone through some pretty good experiences, and some memories we’ve made will last a lifetime. He’s part of that group, and he feels like a very good guy.”

Eichel mentioned being compared to McDavid when he was asked if he has become tired of hearing a certain question.

Nope. The comparisons are only starting.

Sabres president Ted Black said Eichel’s number came up “came up in a casual conversation” during a lunch. Eichel wore No. 9 at BU last season, a number taken by Sabres winger Evander Kane. Eichel has worn No. 15 in the last, which he will sport tonight – draftees usually wear the year – on the stage after getting drafted.

The Sabres have been offering presale jerseys of their No. 1 pick without using Eichel’s name.

“In everything, you prepare for success,” Black said. “If there’s a demand, we want to be prepared for it.”

Black on the emotion of taking Eichel: “It’s been a long plan. It’s something we knew going in 2-3 years ago would require patience. We knew we wouldn’t get love letters from anyone because it is a difficult process. If you don’t have the stomach to do a rebuild, you’ll be doing it again in three years.

“That said, it’s nice to come out on the other side of things. It’s nice to see our fans did stick with us in record numbers in terms of season ticket holders last year and we look forward to the next chapter.”