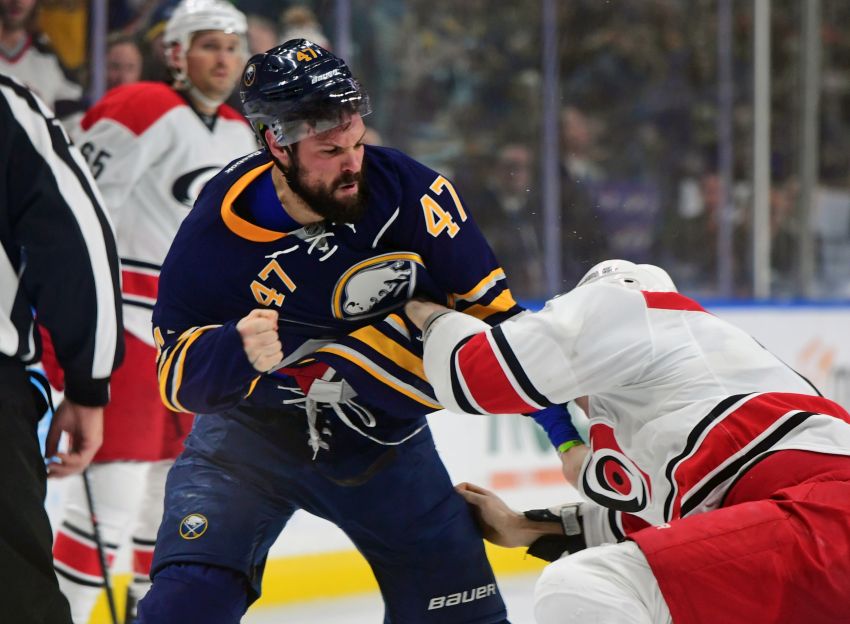 Not only had the Sabres just lost their third straight game, coach Dan Bylsma yanked Eichel, the face of the franchise, off the team’s power play for Matt Moulson just minutes into the game.

Eichel, 20, didn’t want to discuss the brief benching, which ended when the Sabres enjoyed a late power play, their second and last.

“It’s not my decision, it’s the coach’s,” a perturbed Eichel said twice when a reporter pressed him on the move. “Obviously, Moulson’s had a lot of power-play goals this year and he’s helped our team. Just switching up looks.”

Why would a team starved for goals pull its most talented player off the man advantage? The Hurricanes also rank first in penalty killing.

At first, a curt Bylsma said the Sabres wanted a certain “look” on the power play. He said later he wanted to send the struggling Eichel, who has a four-game point drought, and the team, which keeps starting games slowly, a message.

“What haven’t I seen, what we need to see (from Eichel) is what we saw on the first shift of his game that he had tonight,” Bylsma said. “I thought he did have (it) tonight, at times, having that speed and electricity with the puck.”

As a team, the Sabres generated nothing early before the 18,863 fans inside KeyBank Center.

On Thursday morning, Bylsma discussed the Sabres’ need to become “more emotionally attached” at the start of games.

For the past few weeks, the Sabres have rarely broken a disturbing trend of starting slowly and falling behind. They often roar back, but it consistently bites them, too.

“We handed them opportunities in the game right from the start,” Bylsma said.

The Sabres’ season is already on the line, something Eichel, who didn’t lose many games before arriving in Buffalo, clearly understands. If the 12-12-8 team doesn’t run off a string of wins in the next few weeks, they could fall out of the Eastern Conference playoff race.

The Sabres, like so many times recently, eventually got going. After killing four second-period penalties – the Hurricanes possessed the puck for a whopping 14:10 that period, more than any opponent in a home game this season – the Sabres got going in the third.

Johan Larsson made it 2-1 5:32 into the period, igniting the crowd that booed the Sabres off the ice earlier.

The Sabres buzzed around Cam Ward much of the period, pumping 14 shots on the Carolina goalie. Still, they couldn’t get that elusive second goal.

Incredibly, the Sabres have scored one goal or been blanked in 10 home games this season. No wonder they’re 5-6-5.

The Sabres play a road game tonight against the New York Islanders, their final contest before a three-day Christmas break.