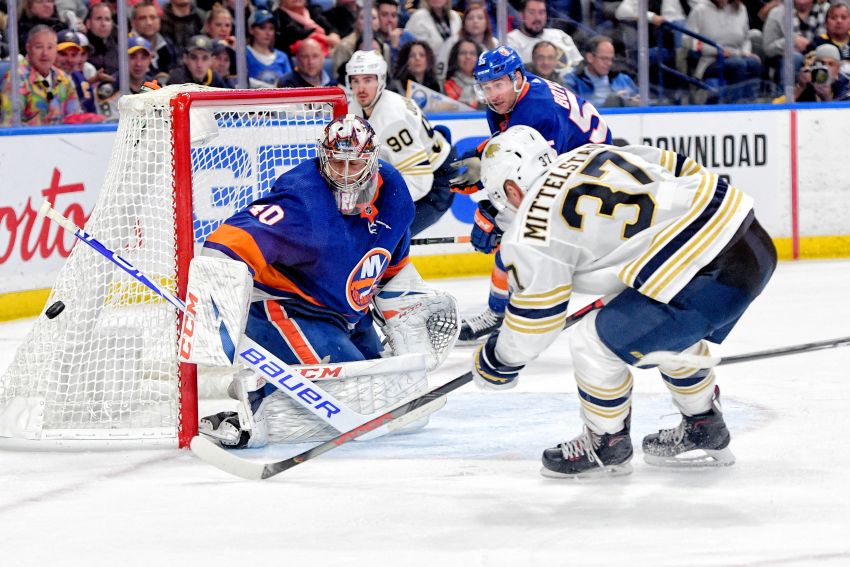 BUFFALO – What do the St. Louis Blues, Nashville Predators and New York Islanders have in common?

The teams, three of the Sabres’ opponents this week, thrive because of their rigid defensive structure.

“It’s not a free-flowing, open style like a lot of teams are playing with the foot on the offensive gas all the time,” Sabres coach Ralph Krueger said Friday. “There’s a real defensive passion to these three team games.”

After beating the Blues and Predators at home, the Sabres face the heavyweight Islanders on Saturday afternoon at Nassau Coliseum on Long Island.

“The most difficult task will probably be (the Islanders),” Krueger said.

The Islanders, who have earned 21 wins and 44 points, have allowed a league-low 70 goals in 30 games under coach Barry Trotz.

On Nov. 2, the Islanders shut out the Sabres 1-0 at KeyBank Center, the only time they’ve been blanked this season.

“There’s a lot of what they’re doing that we’re still striving for,” Krueger said. “The first period (Nov. 2) was actually one of the best in the season until then. Then we got away from our game.”

Now, Krueger said the Sabres “have the strength to carry that through 60 minutes.”

“They’re still the same team,” he said. “They’re … consistent and punishing. If you do anything outside your structure, you will get punished as quickly as any team in the league.”

When Sabres winger Kyle Okposo saw Saturday’s game would be played at Nassau Coliseum, he said he “was pumped.” Okposo spent his first eight seasons with the Islanders.

The Islanders, who plan to move to their new home in Belmont in 2021, will play 28 games at Nassau Coliseum this season. They left Long Island for the Barclay’s Center in Brooklyn in 2015 before returning last season.

“I love that barn, it’s a fun rink to play in,” Okposo said. “A lot of good memories there.”

The Sabres also play the Islanders on March 26 at Nassau Coliseum.