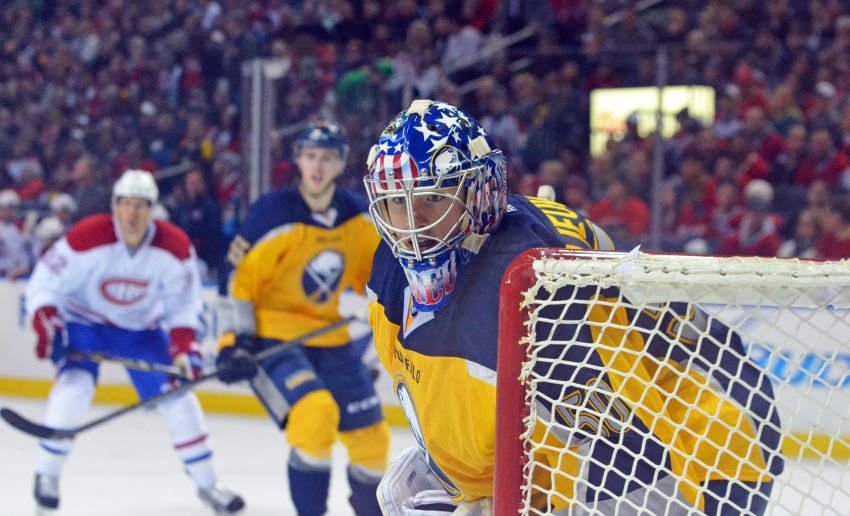 BUFFALO – Fresh off two weekend appearances with Rochester, goalie Nathan Lieuwen learned early Sunday he had earned his first recall to the Sabres.

Newcomer Michal Neuvirth was injured, so the 22-year-old would be backing up Jhonas Enroth inside the First Niagara Center.

“I was shocked. I was nervous. Everything,” a smiling Lieuwen said after stopping all 10 shots he faced in his NHL debut, a 2-0 loss to the Montreal Canadiens. “I couldn’t stop smiling all morning.”

Lieuwen wasn’t expecting to play. But just over 36 minutes into the game, Jamie McBain knocked Montreal’s Brendan Gallagher into Enroth, injuring the No. 1 goalie.

“It’s one of those things where you’re stuck behind a rock and a hard place,” McBain said. “Obviously, you just can’t let him go because he walks right in alone.”

Lieuwen, the 167th overall pick in 2011, had to replace Enroth, whose season could be in jeopardy.

“It was disbelief,” Lieuwen said about entering the game. “It felt like a dream. I had to pinch myself. But once I got in there I actually felt really good.”

Lieuwen impressed from the get-go, stopping a long shot in traffic just seconds in. He made a nifty blocker save on Thomas Vanek’s quick shot from the slot later.

What does Lieuwen remember about that save?

“Anything that happened between whistles I don’t remember,” he said.

Lieuwen didn’t have time to be nervous.

“I couldn’t think,” he said. “I just kept playing hockey.”

Lieuwen might keep playing NHL hockey for a bit. He’ll accompany the Sabres to Calgary for Tuesday’s contest against the Flames, the start of a five-game road trip, interim coach Ted Nolan said.

Enroth, who got up from the ice and tried to move his right leg, will be examined again this morning, Nolan said.

“It doesn’t look like it’s going to be short-term,” he said.

Meanwhile, Neuvirth (lower body, day-to-day) is a “little banged up” but will practice today, Nolan said. The Sabres could also recall goalie Matt Hackett from the AHL.

Neuvirth, who dressed for Saturday’s 4-1 loss to the New York Islanders, possibly tweaked something earlier in the day, Nolan said.

The 6-foot-5 Lieuwen has enjoyed a breakout AHL season with the Americans, wrestling the starting job away from Hackett. He’s 17-11-2 with a 2.34 goals-against average and .922 save percentage in 32 games.

A “one puck at a time” mentality has buoyed Lieuwen this season, his first full AHL campaign.

“I keep saying that a lot, but … whatever happened on the last shot doesn’t matter,” he said. “It’s the next shot and then the next shot. You don’t go and make 30 saves one night. You make them one at a time.”

What would’ve happened if Lieuwen was injured?

Canadiens goalie Dustin Tokarski made 29 saves in his first NHL shutout. Incredibly, the Sabres have five goals during their six-game losing streak.