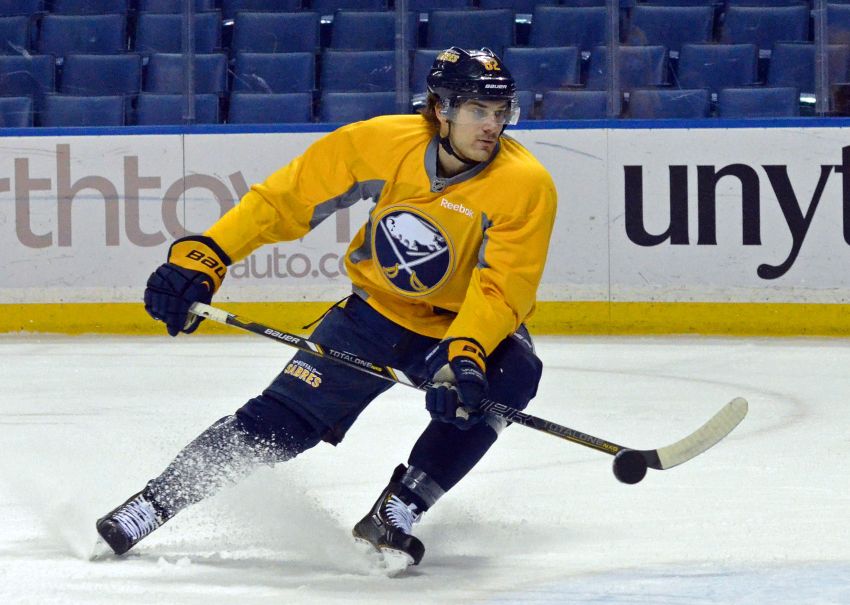 BUFFALO – There is some good news for the reeling, injury-ravaged Sabres. They could have three players back tonight against the Detroit Red Wings. Of course, 13 – yes, a stunning 13 – are hurt right now.

– Defenseman Chad Ruhwedel was concussed when Zac Rinaldo elbowed the rookie in the head. Rinaldo earned a four-game suspension Monday.

– Defenseman Christian Ehrhoff needed about 40 stitches – he tweeted gruesome photos – after Scott Hartnell’s shot him in the right ear. Ehrhoff, who didn’t practice Monday, will be a game-time decision tonight, Nolan said.

Has Nolan, who entered the NHL as a player in 1981, ever seen a rash of injuries like this before?

“Never,” he said Monday inside the First Niagara Center. “We talked about that. Is it bad luck? I’m not too sure. I don’t believe in luck. But it’s just one of those things.”

The Sabres have already used a franchise-record 44 players this season.

But at least some guys are healthy again, right?

– After suffering a scary-looking right knee injury Thursday – it was just a bone bruise – winger Marcus Foligno will play tonight.

Foligno fell awkwardly and his knee jammed up after getting tangled with St. Louis’ Roman Polak.

“Right when it happened I knew something was wrong,” Foligno said.

But the knee felt good again Friday and he quickly resumed working out.

– Winger Torrey Mitchell (undisclosed) pronounced himself ready Monday after a six-game absence. Nolan said Mitchell will be a game-time decision, however.

Mitchell was injured in his Buffalo debut March 6 and again March 25. The 29-year-old has played only five games since arriving from Minnesota.

“Disappointing,” he said. “You want to come in and make an impression right away. I wasn’t able to do that because I got hurt.”

– Winger Chris Stewart, thought to be lost for the season after hurting his right ankle March 6, is questionable for tonight. Nolan said Stewart was seeing the doctor Monday following practice.

The Sabres need to recall a defenseman and a goalie. They’ve already used five goalies this season and dressed seven for games. That doesn’t include a slew of practice netminders. Phil Christ, a local goalie, filled in for Lieuwen on Monday.

Update: The Sabres have summoned Makarov and defenseman Mark Pysyk.

They have both of Rochester’s regular goalies, Lieuwen and Matt Hackett, who will start tonight.

The Sabres will likely summon rookie goalie Andrey Makarov, who has been playing well for the Amerks. The 20-year-old Russian spent most of the season in the ECHL before a recent promotion.

The injuries are wreaking havoc on Rochester’s playoff chances. The Amerks lost nine in a row before their current three-game winning streak. If the season ended today, they would have a playoff spot, though.

Some players could go back to the AHL today.

“In a perfect world, we’d like them down there to continue to grow,” Nolan said.

In other injury news, winger Drew Stafford (undisclosed) skated on his own Monday but will sit again tonight. He could return Thursday, Nolan said.

Meanwhile, defenseman Tyler Myers’ season could be over with only four games left. Nolan said Myers, who crashed into the net March 25, hasn’t even skated yet.

Konopka said he suffered a lower-body injury March 23 in Vancouver. Flying back across North America then worsened it.

“A five and a half hour flight didn’t help,” Konopka said.

This final week is huge for Konopka, a native of Niagara-on-the-Lake, a short drive across the Ontario border. The 33-year-old will be an unrestricted free agent following the season.

“Obviously, playing in Buffalo is a dream come true,” he said. “You don’t want to finish the year not playing. So it’s pretty important for me.”

“I still think there’s a lot of guys in here that every game’s an opportunity to show themselves,” Mitchell said. “That’s what pretty much everyone in this locker room is trying to do. It’s no secret we’re in last place. The team’s probably going to be a lot different next year. This is training camp for some guys right now.”