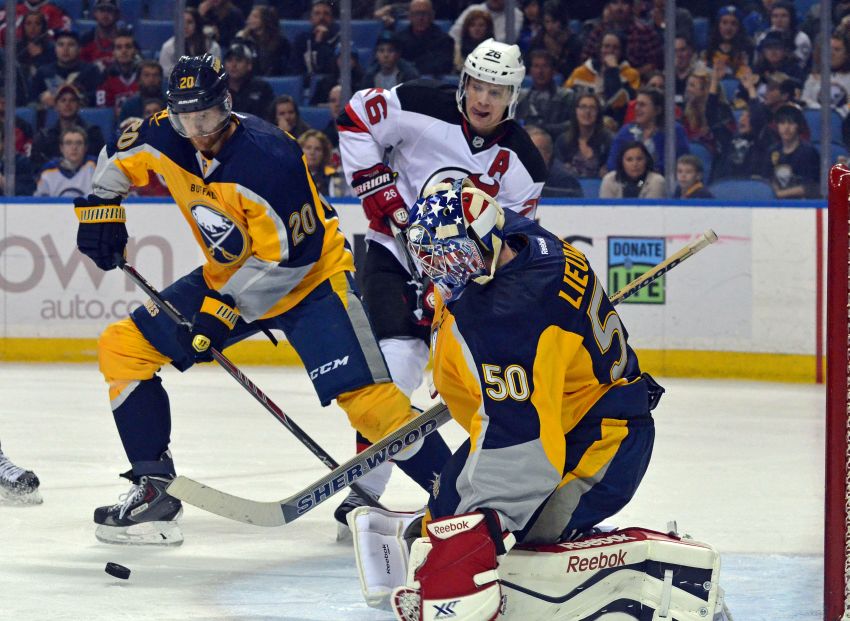 BUFFALO – There is some good news. The Sabres could have three injured players back Tuesday against Detroit. Of course, 13 players – yes, a stunning 13 – are hurt right now.

Incredibly, the Sabres suffered three more injuries in the third period of Sunday’s 5-2 loss in Philadelphia.

– Defenseman Chad Ruhwedel was concussed when Zac Rinaldo elbowed the rookie in the head. Rinaldo has a hearing with the NHL today.

– Defenseman Christian Ehrhoff needed about 40 stitches – he tweeted gruesome photos – after Scott Hartnell’s shot him in the right ear. Ehrhoff will be a game-time decision Tuesday, Nolan said.

Has Nolan ever seen a rash of injuries like this before?

“Never,” he said following practice this afternoon inside the First Niagara Center. “We talked about that. Is it bad luck? I’m not too sure. I don’t believe in luck. But it’s just one of those things.”

At least some players are healthy.

– Winger Torrey Mitchell pronounced himself ready today. Nolan said Mitchell will be a game-time decision, however.

– Winger Chris Stewart, thought to be lost for the season after hurting his right ankle March 6, is questionable for Tuesday. Nolan said Stewart was seeing the doctor this afternoon.

The Sabres need to recall a goalie. They’ve already used five this season and dressed seven for games. They have both of Rochester’s regular netminders, Lieuwen and Matt Hackett, who will start Tuesday.

The Sabres will likely summon another netminder from the Americans, Nolan said.

Goalie Andrey Makarov has been playing well for the Amerks. The Sabres used a local practice goalie today.

In other injury news, winger Drew Stafford skated on his own today but will sit again Tuesday. He could return Thursday, Nolan said. Meanwhile, defenseman Tyler Myers’ season could be over with only four games left. Nolan said Myers hasn’t even skated yet.

Center Zenon Konopka practiced today but Nolan didn’t mention his name among possible returnees. Konopka said he didn’t injure himself on a plane, as has been rumored. He’s said it’s a lower-body ailment.

Related: Sabres’ Chad Ruhwedel out with concussion after elbow to head