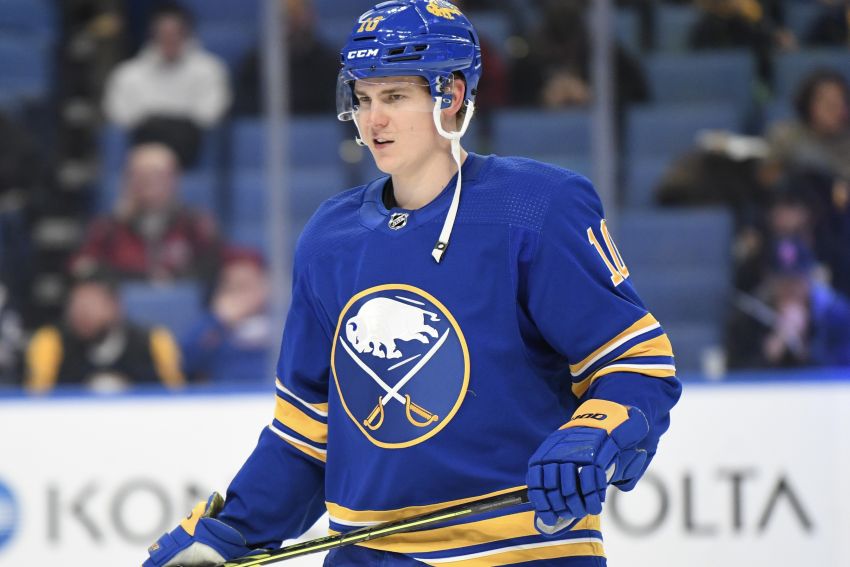 Barely a month ago, Buffalo Sabres defenseman Casey Fitzgerald was in the minors. The rookie has played just 14 NHL games.

Still, Sabres coach Don Granato possesses so much confidence in Fitzgerald he will replace the injured Henri Jokiharju on the top pair tonight beside Rasmus Dahlin.

Granato said Fitzgerald and Dahlin are “comfortable” with the Sabres’ style and “compatible” with each other.

“A lot of defense is playing in tandem and I think that’s what Dahls and Joki have gotten a real good feel of,” Granato said on a Zoom call this afternoon from the Enterprise Center, where the Sabres face the St. Louis Blues tonight.

The Sabres are hopeful Jokiharju, who suffered a lower-body injury in Wednesday’s 4-0 loss to the Montreal Canadiens, won’t be sidelined long. Granato said Jokiharju is doubtful for Sunday afternoon’s game against the Dallas Stars.

“The hope is to have him back very soon after,” Granato said.

Granato said a handful of other Sabres played Wednesday despite feeling ill.

“They didn’t have great energy as a result,” he said. “So it actually worked out. We didn’t skate yesterday in hopes of those guys could all recover and we had better energy as a result today. … We appear to be a little healthier than we were the other day.”

To make room up front, the Sabres will scratch Mark Jankowski. They also this afternoon sent rookie Brandon Biro back to the Rochester Americans. Biro made his NHL debut Wednesday.

With Jokiharju out, defenseman Robert Hagg will return tonight. Following a strong start this season, the Swede has been losing ice time and sometimes getting scratched.

Granato said the emergence of Fitzgerald and Mattias Samuelsson, another rookie, and the development of Dahlin and Jokiharju means other defensemen will play fewer minutes.

“He’s got to deal with, obviously, going in and out of the lineup a little bit,” Granato said of Hagg. “You just have to learn to deal with that and reacclimate to that.”

One thought on “Injured Henri Jokiharju out against Blues; Sabres make roster move”